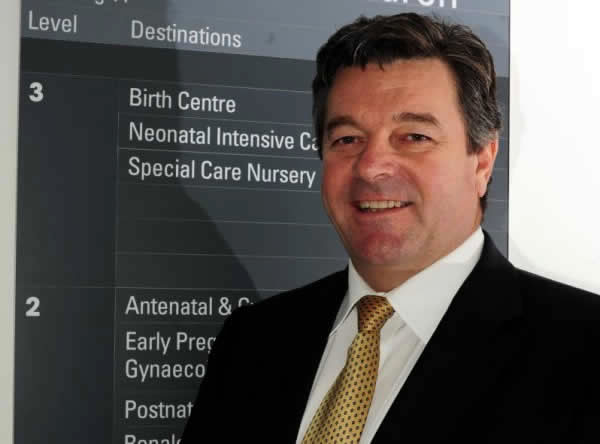 The death of their newborn daughter Hannah in 1993 led Peter (pictured) and Susan Cursley to start a foundation to raise much-needed funds for the Canberra Hospital’s Centre for Newborn Care. The Newborn Intensive Care Foundation was their way of saying thank you to the medical and nursing teams who had supported them during the difficult time.

Since its official launch in 1995, the foundation has raised over $4 million in cash and kind and made a difference to the lives of thousands of babies and their families across Canberra and Southern New South Wales.

Soon after the foundation was created, 26-year-old Susan died of a brain tumour, and Peter has run it with a small committee ever since – though he says he is still no expert in grief and loss.

“The pain is always there but time helps keep the pain at bay. Starting the foundation has helped put a little positive into what was a huge negative, so in my mind at least it creates a reason for our loss,” he says.

Peter says that the most rewarding part of the job is knowing that he has played a small part in helping sick babies go on to lead normal lives.

“Positive intervention with the right care at such an early age means that babies may not require on-ongoing treatment or support as they grow older through their teens and in to adulthood.”

NICF is volunteer-run and has no administration expenses. Donations have been used to buy equipment, fund research, send nurses to conferences to learn and share knowledge and to purchase small gifts for babies and their parents who are in the intensive care nursery over Christmas.

While some of these funds are raised via media events such as telethons, most support comes from the local community through donations, events and sponsorships.

Peter, a 2012 ACT Australia Day Awards finalist, says that the Canberra Hospital’s Centre for Newborn Care is in desperate need of a retinal camera to reduce retinopathy, a potentially blinding eye disorder in premature newborn babies.

The camera would complement Larry, an affectionately named laser that NICF purchased for the unit a few years ago. Before Larry’s purchase, babies had to travel from Canberra to Sydney for retinopathy treatment, which meant coordinating transport, an available neonatal intensive care bed in Sydney and an available ophthalmologist to perform the treatment – “an expensive exercise for the want of a $70,000 eye laser,” Peter says.

NICF’s next fundraising event is a tribute to Australia’s first international diva, Dame Nellie Melba, on Saturday 18 October at 3pm at the Wesley Uniting Church in Forrest. Tickets are $20 (available at the door) and all proceeds will go to the foundation. If you’d like to help with NICF’s fundraising efforts or get in touch with Peter, visit its website or Facebook page.

Archie Mac - 25 minutes ago
So if you don’t have it - are you putting anyone else at risk? View
Judy Robinson - 3 hours ago
What are the side effects??? Medical trials haven’t been 18 months, like other drugs. Give it to the PM first and see what... View
Shaz Ray - 6 hours ago
Jill Hiscock in what countries? View
Community 36

Daniel Bryan - 7 hours ago
This, Oaks, A+A, Grand Central, Ivy, and Trilogy definitely bringing more residents into the Woden valley isn't a bad thing.... View
Michael Jayfox - 8 hours ago
Mat Barber please explain how you think that new parking ramps will stop it from being an eyesore View
Tristan Wellens - 8 hours ago
Will only rent for about $500 a week per smaller unit 👌🏻 View
Food & Wine 4

Josh van Limbeek - 11 hours ago
What a great article! My Mum is a Red Hatter and she has so much fun too ❤❤ View
Jo Jo Joey - 12 hours ago
Barbara Bennett, I love how much enjoyment your ‘red hatters’ gives you’ 🎈💜❤️💜 View
Property 27

Elroy Jones - 11 hours ago
Peter Bee there are a lot of places it could go. Majura the most recent I’ve heard. View
Christopher Cuba Rabanal - 11 hours ago
Better lighting around the carpark View
Andy Sell - 12 hours ago
2 words mate, lite rail View
News 17

@The_RiotACT @The_RiotACT
Canberra Airport boss Stephen Byron is one of many Canberrans recognised in the Australia Day Honours List https://t.co/nHHrGpMyXc (46 minutes ago)