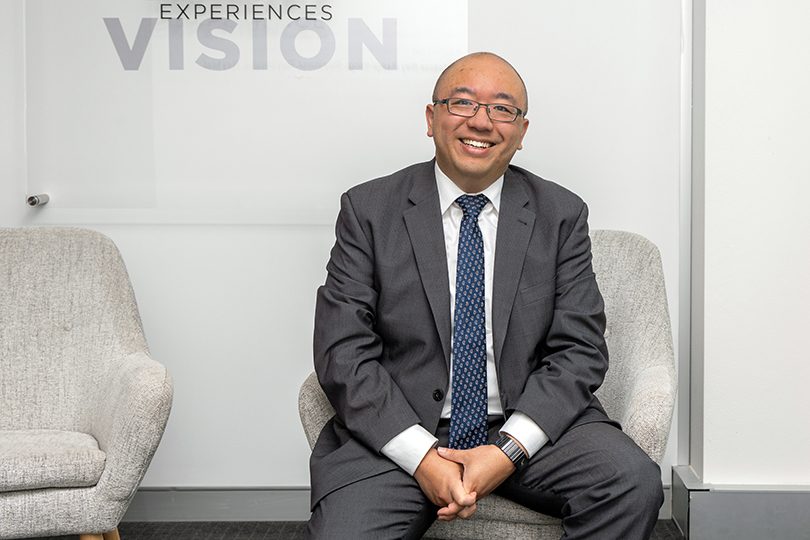 Learning three languages is a considerable feat, but if it helps both his investors and vendors, Independent Gungahlin agent Michael Wang is happy to do it. He has already mastered Mandarin and English, and has a working knowledge of speaking Cantonese. His international accent was influenced by Chinese heritage, his boyhood in Belconnen and his high school and university years in Canada.

“I liked Canada, but Ottawa was really, really cold,” says Michael. “So I came back to Melbourne to do my Master’s degree in business administration.”

Michael also has a degree in economics and commerce, but his interest in real estate was piqued by working with his father, who bought homes to renovate and then sold them for a profit. Combined with his knowledge of business, real estate was an ideal career and he decided to give it a try. He moved back to Canberra, got married, had two kids, and now resides in Gungahlin with his family.

Now in his 10th year of selling real estate at Independent Gungahlin, Michael has received many awards and accolades for his work, including Independent’s Client Experience Award in 2017.

“It’s important to me that my customers can trust me,” he says. “For most people, this [buying a home] is the single biggest investment they will ever make in their lives. Trust is very important in that relationship.”

Michael is a family man first, and he understands the needs of families when it comes to buying an appropriate family home, or first investment property. He speaks of his own children – an eight-year-old daughter and five-year-old son – with delight.

“My son is into dinosaurs,” he says, smiling. “My daughter, she does performance dancing, she’s learning Spanish, she does swimming, piano, everything you can think of.”

There are around 15,000 Chinese Australians in Canberra – plus another 10,000 including international students and visitors – and Michael’s connection to that community is strong. He is proud to converse in their native language, where possible, and is teaching his children to speak Mandarin at home. He is proud of the culture and the cultural activities the community conducts, and in addition to taking his son to the National Dinosaur Museum, he enjoys Chinese New Year celebrations in the national capital.

As a parent, Michael acknowledges it is difficult to feel secure about a child studying internationally, but the two most important factors for parents of children planning to study abroad are safety and a location within walking distance of shops and the institution where they are going to study.

“The vacancy rate in Canberra is under one per cent,” he says. “We have extremely high rental prices, particularly near universities.

“Parents might want to think about buying an apartment in the area to keep their children’s study on track and to ensure their safety in the community. As students, without having rent records and proof of income, it’s very difficult to compete with others who want to rent the same property who have those things.”

Michael’s advice to parents is to think about whether investing in an apartment is a better option for their children, as it can give them a record of renting, give them the safety they need, and ensure they are close to their university and shops. Somewhere such as The Grounds in Braddon is close to both and a sound investment for parents if they are thinking long-term.

“In January and February every year in Canberra, there’s a rental squeeze because of an influx of students,” he says. “It coincides with the Defence posting cycle, and new public service employees coming to Canberra [who] are all looking for a rental home.

“If you’re a student, how will you compete with people who are already working full-time and can show years of rental records, with a vacancy rate like ours?”

Independent Property Management managing director Hannah Gill recently raised the same issue for all students, both international and those from Australia.

“I think if there are parents of international students who are going to study here, they should definitely talk to me about options,” says Michael. “I’m contactable and very happy to speak with them in any language I can.”

Michael is also on WeChat and appreciates how difficult it can be to know who to trust in another country, in particular when making an investment in real estate.

“I hope my reputation in the community and my track record over 10 years at Independent is reassuring,” he says.

Get in touch with Michael Wang today. To learn more about Independent, visit their website.

Lynda Galt - 25 minutes ago
Good luck it will be great for Yass View
Lyn Smith - 37 minutes ago
They'd better! It would be great to see this restored! View
Neil Thompson - 4 hours ago
Andrew Turnbull, great bloke to get on the piss with as well. View
News 51

Maya123 - 51 minutes ago
More realistic of them to accept that climate change is happening and not ignore the research of those working in the field a... View
Jo Hann - 2 hours ago
Christopher Stuart Veilands how do they brainwash kids in schools when they've never been in government and have no say in th... View
Jo Hann - 2 hours ago
Robert Harrop how does a party that's never been in government have enough control over schools to brainwash the children in... View
What's On 1

Lucas Hayden - 1 hour ago
This is one of the best facilities ive ever seen...... I am not a "horse" person but I almost became one just walking around... View
News 17

Kathy Sepulveda - 1 hour ago
Jessie Nicho I'm a little late to this but I agree with you 100%. All the money is going into the Northside Public Schools an... View
Sport 2

Trish Casey - 2 hours ago
Mark Parton has helped age care and those with disabilities living in ACT housing more than anyone .we have had 3 break ins t... View
Mark Parton MLA - 3 hours ago
It’s my job to help constituents and It’s my job to hold the government to account. I’ll continue doing both. View
Capital Retro - 4 hours ago
Nailed it. View
News 2

Robyne Mitchell - 3 hours ago
How many years have they been promising this? View
News 13

Steven Campbell - 4 hours ago
Reducing posted speed limit is simply government’s way of running away from their responsibilities. Laws are only as effect... View
Opinion 73

Capital Retro - 4 hours ago
Spot on. What goes on behind the scenes is usually at odds with the "clean & green" propaganda we hear. Just like a wind "far... View
George Watling - 12 hours ago
These things also generate vast amounts of e-waste and carbon pollution. Studies show they last about 9 months before they ar... View
Opinion 11

George Watling - 12 hours ago
These multi title trojan horses are cropping up all over Canberra. Developers are trying it on in Holder and Weston and other... View
Opinion 94

George Watling - 12 hours ago
Marc Edwards Spot on Marc. The best way to deal with congestion is decentralize workplaces. If everyone is travelling to a ce... View
show more show less
*Results are based on activity within last 7 days

WARNING: This story contains descriptions of domestic abuse. As a woman was brutally choked until she blacked out, her attacker...
Business 23

The major shareholder of Public Bar in Manuka and the founder of Canberra's largest accounting firm, Walter Turnbull, has taken...
Breaking 3

@The_RiotACT @The_RiotACT
Captains Flat Road will get a much-needed $10 million upgrade over the next four years as part of a capital works program in the Queanbeyan-Palerang area https://t.co/2zPIjg1tc5 (4 hours ago)