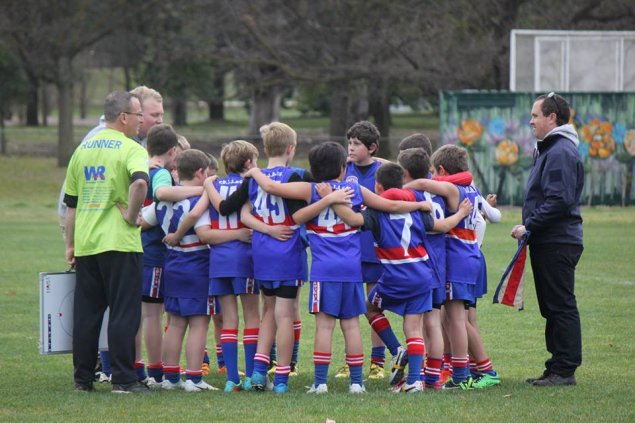 The Tuggeranong Bulldogs Junior AFL Club, which will this year celebrate its 40th season, is almost as old as Tuggeranong itself.

The club was started in 1976 (the result of the South Woden AFL Club moving even further south), just two years after the first families moved into the suburb of Kambah. Its senior teams eventually split to form what would one day become the Tuggeranong Hawks, which is now the feeder club for junior clubs including the Tuggeranong Bulldogs, Tuggeranong Lions and Calwell Swans.

President Richard Asher first played for the Tuggeranong Bulldogs in the seventies, but has been involved as a parent since his eldest son started playing Auskick in 2001. This is his second year as president, and he says he enjoys being involved with a club that has a strong community focus.

“This is a really good family club. It brings people in, it’s a friendly environment,” he says.

“There are so many occasions when a parent will drop their kid off for training on the way to doing something else, and an hour later they’re still here talking to other parents and helping out. We’d also like to do more community events like barbecues or pizza nights after training – not for any particular reason except that we want to keep that community feeling strong.”

Tuggeranong Bulldogs Junior AFL Club counts Aaron Hamill (Carlton and then St Kilda), Justin Blumfield (Essendon) and Jason Tutt (Carlton) among its former players. And while Richard says the club is proud to nurture young talent, its number one focus is on keeping kids playing sport.

“We’re not out to win flags. We’re out to get kids playing and enjoying football. Whatever we can do to keep families involved, we’ll do it,” he says.

To that end, Tuggeranong Bulldogs has this year brought in a scholarship to assist players from disadvantaged families.

“Gai Brodtmann sponsored the club with some money and we’ve used that to provide scholarships for kids whose families otherwise wouldn’t be able to afford it. We give them rego, shoes, socks and shirts and try to get them involved with the club as much as we can,” Richard says.

The Tuggeranong Bulldogs Junior Football Club will celebrate its 40th anniversary on Saturday 8 August with a gala dinner. All past and present players are welcome.

“We’d love to find the Bulldogs of old and have them come along to the gala dinner. I’ve been involved with the club for 15 years and I think we’ve managed to track down a few people, but there are others who were involved well before then too. That’s who we’d like to open the event up to as well,” Richard says.

The venue for the gala dinner is still being finalised, but if you’re interested in celebrating the club’s 40th year or would like to organise a table, email tuggbulldogs@bigpond.com.

Eddie Majcic - 32 minutes ago
Yes. We need the AIS precinct better utilised. Open it up more to the public get more people using it. It's a great facility... View
Heavs - 49 minutes ago
I actually like what the Tasmanian Government just did. They partnered up with Hockey and bought a rolling bunch of events to... View
Capital Retro - 2 hours ago
"The sports organisation would, of course, require a substantial amount of money from the ACT Government to attract the event... View
News 2

Vander Leal - 57 minutes ago
David Jackson maybe you don't see how public debt has been used to "keep the economy alive and thriving"... Nothing wrong wit... View
David Jackson - 4 hours ago
Interesting to know how? If I ran my business at a loss every year for the last twenty years and accumulated more debt while... View
News 1

nobody - 1 hour ago
Colonisation turned this continent into the great country it is today. If colonisation had not taken place, then MLA Paterson... View
Community 7

Capital Retro - 2 hours ago
As is the 100% renewable electricity it uses is heavily subsidized, more than the diesel fuel the buses use. View
bj_ACT - 13 hours ago
Noting the Light Rail is much much more heavily subsidised than the buses. View
jam - 15 hours ago
The tram is more easily accessed by more people as it encourages dense development within its reach. It isn’t really possib... View
Business 3