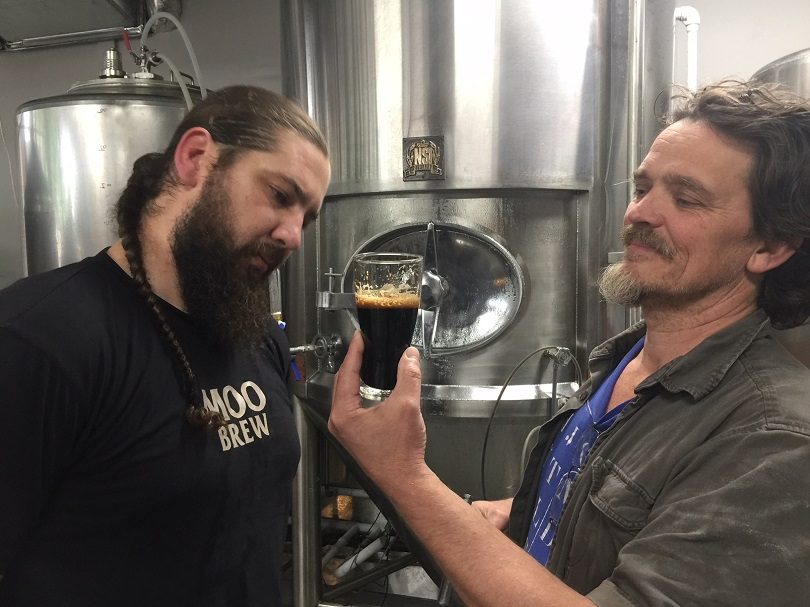 Now here’s something to drink to – as of Friday (15 December), Canberra beer lovers can purchase and enjoy a locally brewed, Premium Russian Imperial Stout. In a Canberra first, the Wig and Pen at ANU – one of the region’s favourite breweries – will be pumping out 550 of these gems and I can pretty much guarantee they will become collector’s items. Naturally, the RiotACT sent one of their main consumers of the darker ales to venture down to the brewery-tavern and learn more about this important beer-related news.

Wig and Pen owner Lachie (Lachlan McOmish) admitted the idea of bottling a special premium beer had been considered for a long time. Brewer James Paisley, pictured above, agreed: “We should have done this years ago”. The breweries many local fans will no doubt agree as this style of beer has previously won Wig and Pen numerous awards. James explained that he had studied numerous old award-winning recipes from the brewery’s extensive files and was proud to have been given stewardship of this brew. “It’s a great honour for a brewer to be able to manage the process from its inception until the customer opens the bottle and pours it into their glass to enjoy.” 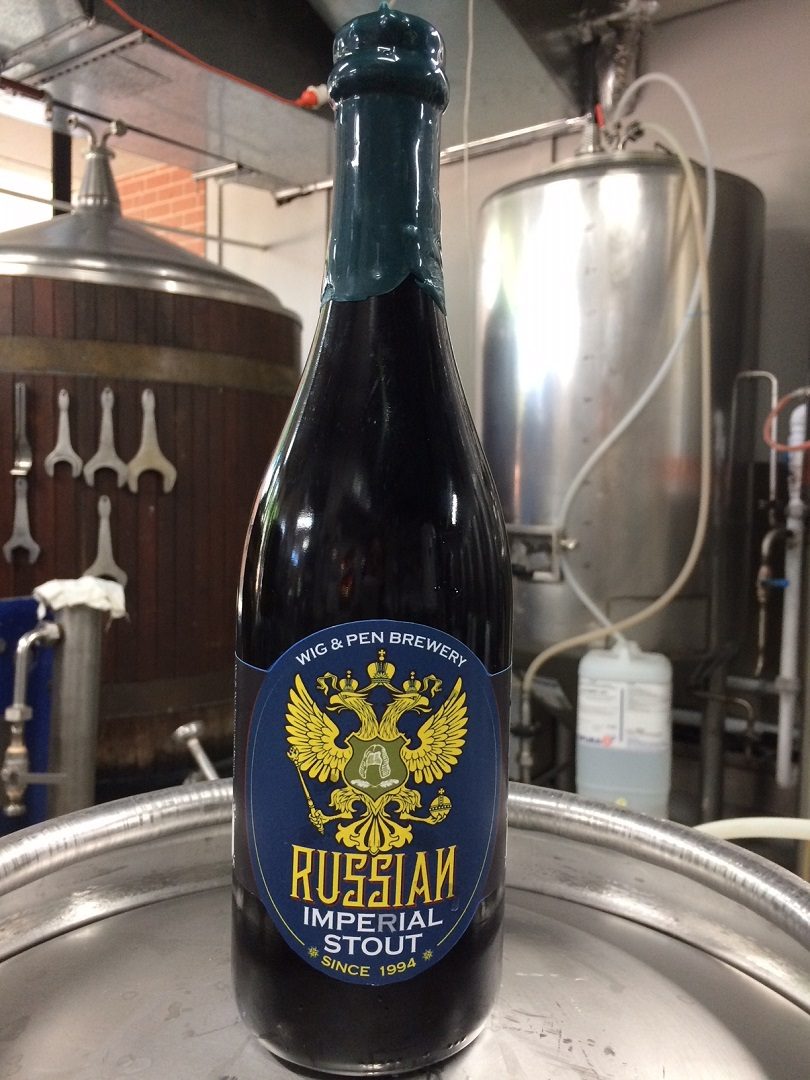 The hand-bottled and wax-sealed 750ml bottles of Wig and Pen Russian Imperial Stout are expected to sell out quickly. Photo: Elias Hallaj.

James explained how each bottle of Russian Imperial Stout is hand-poured using a special counter-pressure filling technique before they are each individually capped by hand and sealed with wax. Given the expense of the ingredients and the craftsmanship of each bottle and the fact that they can be cellared for 5 years, it is expected that they will quickly sell out once they go on sale this weekend. As well as being available for purchase directly from The Wig and Pen Brewery Tavern, you will also be able to purchase Premium Russian Imperial Stout from Plonk, Ainslie Cellars, Hops and Vine, and Page bottler. The price of $39.95 per bottle might seem steep for a beer, unless you understand the value of well-crafted beer. It’s a small price to pay to broaden your appreciation and understanding of different styles of beer. There are hundreds, if not thousands of homebrewers and well-travelled beer connoisseurs in the Canberra region who will realise the value of purchasing and storing this beer to enjoy on a special occasion, or as a gift for someone who would appreciate it. 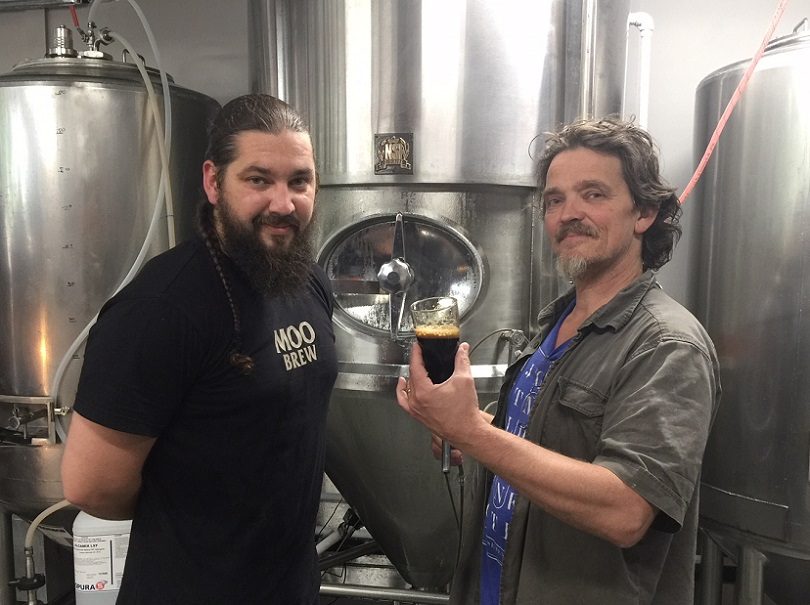 These two brewers at the Wig and Pen is rightfully proud of this batch of Russian Imperial Stout. Photo: Elias Hallaj.

The writer was unfamiliar with the colourful background story to the unique style of beer known as Russian Imperial Stout. When asked, Wig and Pen owner Lachie was happy to explain it in detail. The short version is that Russian Tsar Ivan IV (Ivan the Terrible) did a deal with the English Queen Elizabeth I in the 1560s to use British artisans to build Moscow and sent ships to England full of bounty to pay for the building work. These ships would return to Russia laden with strongly alcoholic and sugary stout that was designed to last the long journey. But this is just one of about five different explanations of the origin of this beer that you can find online. For example, you can find longer and alternate explanations for this beer here and an r-rated version here. 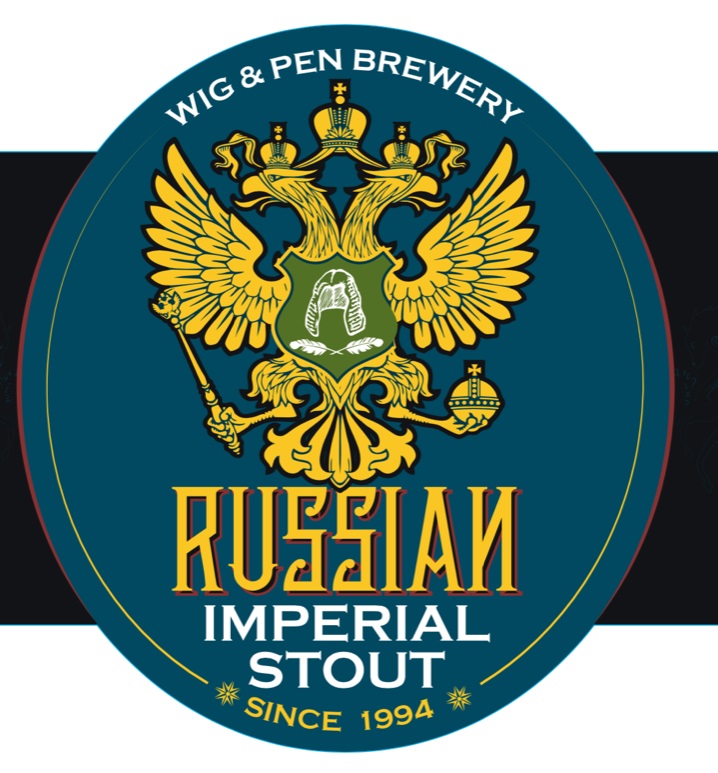 Each bottle of Wig and Pen Russian Imperial Stout is adorned with this unique artistic label. These bottles will no doubt be collector’s items in the future. Photo: Supplied.

It goes without saying that if you like dark beers, stouts, porters, and the like, you will enjoy this beer. The official 2015 Australian Amateur Brewing Championship Style Guidelines describe the qualities of Russian Imperial Stout as follows: “Aroma: Rich and complex, with variable amounts of roasted grains, maltiness, fruity esters, hops, and alcohol. The roasted malt character can take on coffee, dark chocolate, or slightly burnt tones and can be light to moderately strong… Aged versions may have a slight vinous or port-like quality, but shouldn’t be sour… Appearance: Colour may range from very dark reddish-brown to jet black. Opaque. Deep tan to dark brown head… Flavour: Rich, deep, complex and frequently quite intense, with variable amounts of roasted malt/grains, maltiness, fruity esters, hop bitterness and flavour, and alcohol. Medium to aggressively high bitterness. Medium-low to high hop flavour (any variety). Moderate to aggressively high roasted malt/grain flavours can suggest bittersweet or unsweetened chocolate, cocoa, and/or strong coffee. ” Clearly, there is a lot of character in this beer to enjoy! 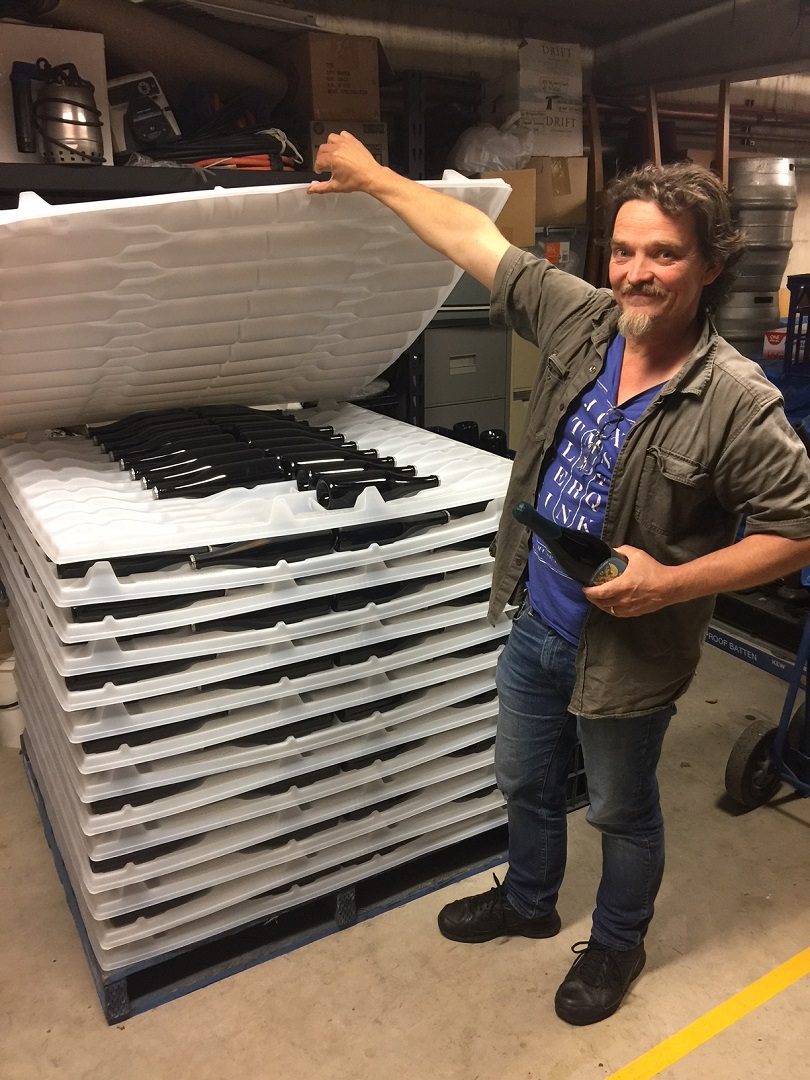 Wig and Pen Brewer James Paisley inspects a large stack of 550 750 ml premium bottles prior to the bottling of the Wig and Pen Russian Imperial Stout. Photo: Elias Hallaj.

There are always many great beers to enjoy at the Wig and Pen, as previous RiotACT articles will attest. The author advises visiting at least once a month to sample their latest brew and discuss brewing with Lachie and his team of beer experts and fanatics. But that’s not the only reason to visit. The author also recommends the Wig and Pen Food menu, shown below. Popular items do tend to sell out during the day, a sign that food is cooked fresh upon making an order and also that it is wise to buy and enjoy some ale with your food, and anticipate it, to enjoy it more. That’s my theory anyway. 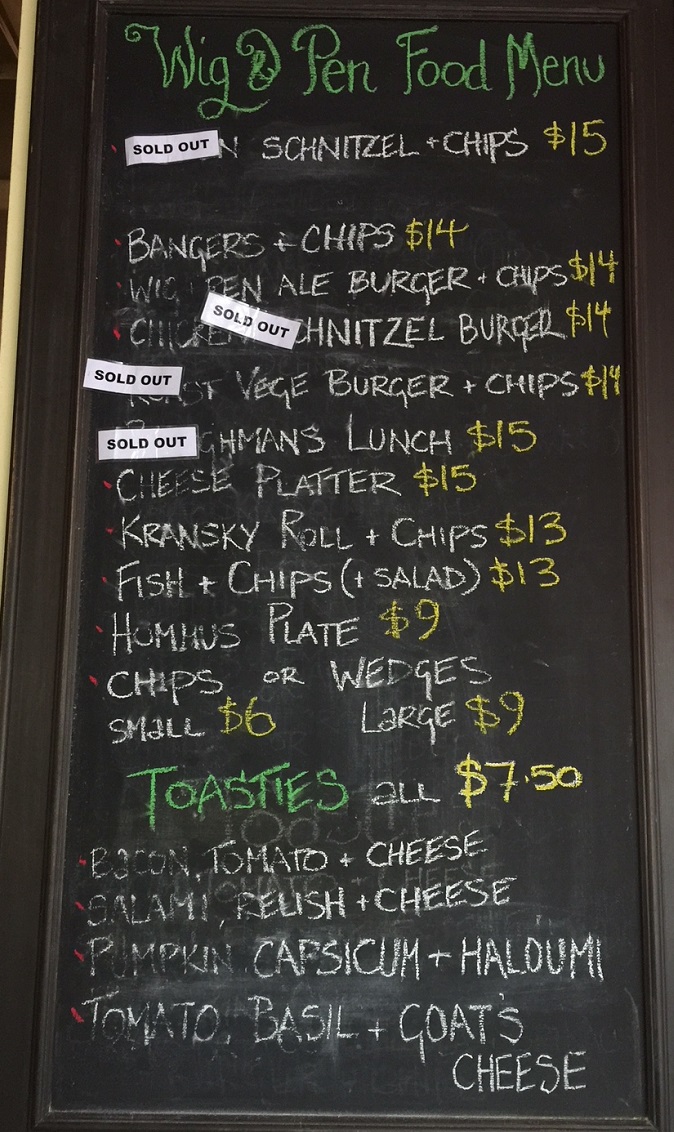 The Wig and pen Food menu contains many old favourites worth trying with various beers and ales. Photo: Elias Hallaj.

As you can see from the picture below, the kransky roll and chips looked great and helped absorb the alcohol in some of the Wig and Pen’s high-strength beers. 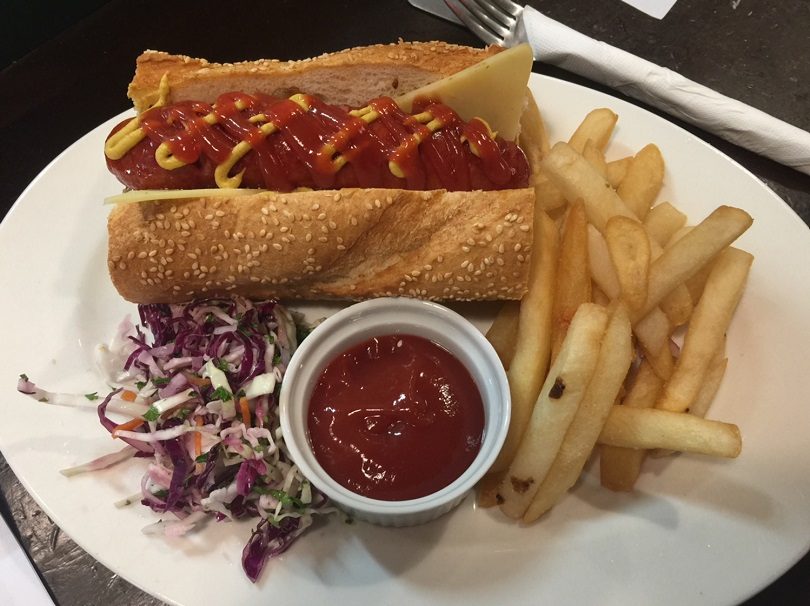 If you would like to learn more about beer and perhaps even try your hand at brewing your own at home, I would suggest joining the Canberra Brewers Club and/or visiting Canberra’s best homebrew shop in Kambah. In the meantime, here are the essential facts about the Wig and Pen Brewery Tavern.

Where: The Wig and Pen is at Llewellyn Hall, William Herbert Place, ANU.

Transport: Canberra’s Action bus interchange is a short walk from the Wig & Pen. There are also many routes which pass through or are close to the ANU. See action.act.gov.au for more information. Free parking after 5 pm weekdays and on weekends.

Why: Because life is too short not to try more beers.

Elias Hallaj (aka CBRfoodie) is a part-time food blogger and full-time political staffer who has joined RiotACT as a regular contributor. All his opinions about drinking beer are his own. Don’t worry he is trying to cut back on drinking too much beer, but insists it’s just too damned tasty. If you have any tips or feedback or advice about beer or brewing you can add a comment below or find him most nights on Twitter @CBRfoodie.

Damn you for beating me to tagging! Well done Justin!!

Not sure if it wild be any good in summer?

I didn’t know your brother had a doppelganger Jacqui!