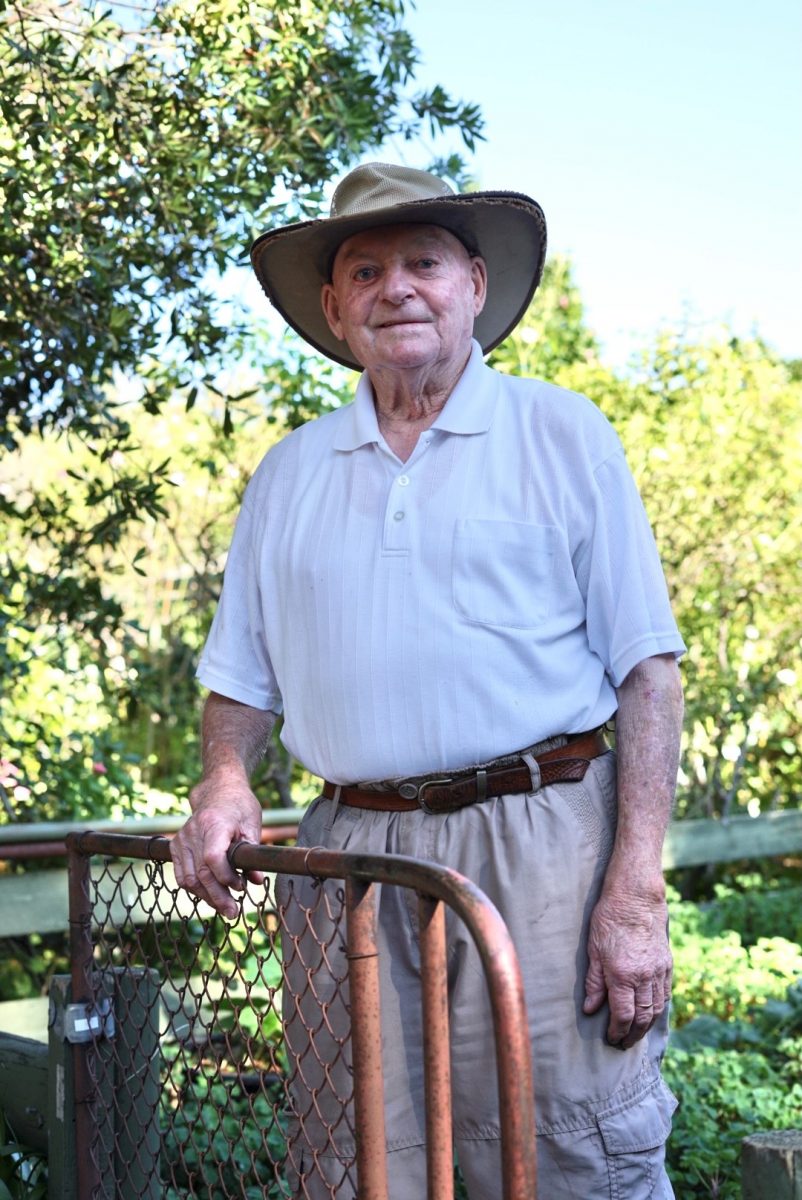 Joss Booth in his Jerrabomberra garden. He is one of many Australians walking in the March On challenge for Soldier On. Photo: Supplied.

A retired farmer from Jerrabomberra who has sat with mates “completely wrecked” from their service in Vietnam, and a young emergency services volunteer from Young, who wants to make a noise about the “silent screams for help” are two locals walking the equivalent of the 96km Kokoda Track to bring attention to the health of our military servicemen and women.

Joss Booth, a retired serviceman from Jerrabomberra, and Elle Paradisis, of Young, who battled the Black Summer bushfires, are just two of the more than 6000 people in Australia participating in the March On With Soldier On challenge this March.

The challenge involves walking or running 96km during the month, and more than $1 million has already been raised in first week.

Joss Booth, 82, has been walking daily in his garden at Jerrabomberra, but isn’t sure about what he calls “technical gadgets and websites” that record the kilometres he paces while propagating tomatoes in his extensive backyard garden. 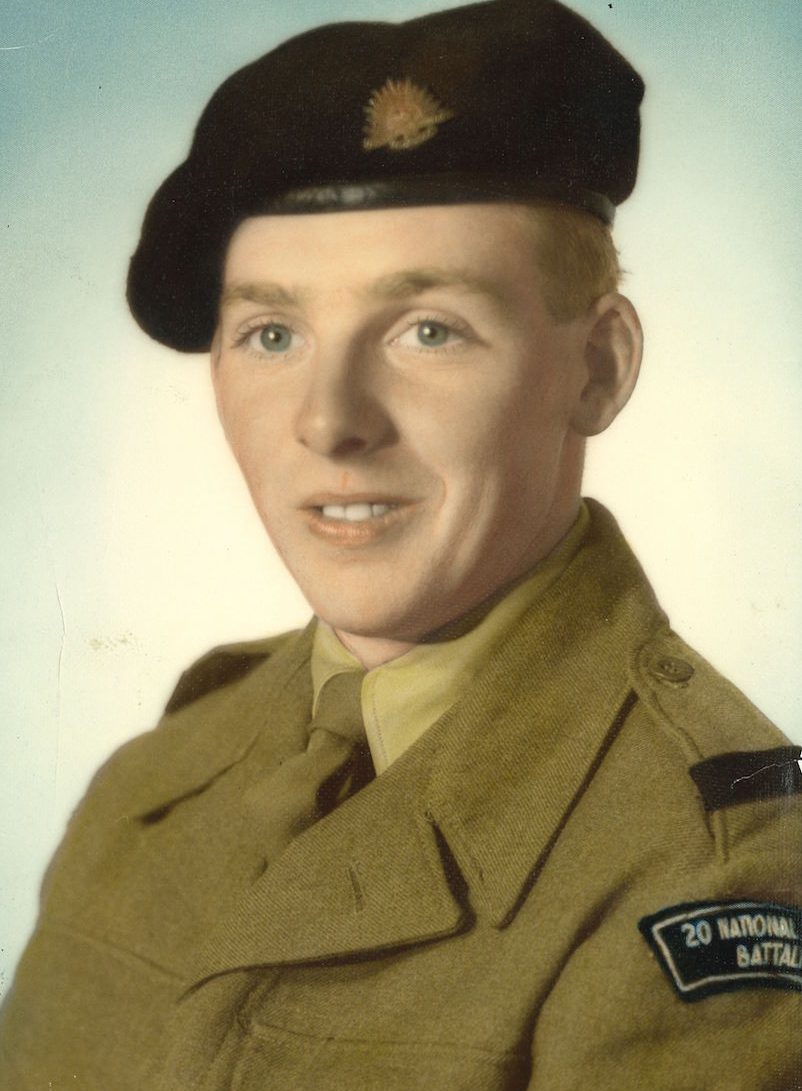 Joss Booth during his time as a national serviceman in the Australian Army. Photo: Supplied.

Joss, who did national service with the Australian Army in the late-1950s and 1960s, said his motivation is simple.

“If it wasn’t for our servicemen and women, we wouldn’t be here,” he tells Region Media.

“I’ve sat with mates who returned from Vietnam and they were completely wrecked by what happened to them.”

Born in Crookwell, Joss remembers riding a horse to school but now prefers to walk around his garden that has produced 16 varieties of tomatoes, plus all kinds of flowers and other vegetables.

“I’m out in my garden every day and I do a lot of walking,” he says. “I also understand what our servicemen and women have been through. I feel I owe it to them that I have the things I do here in the garden.”

Elle Paradisis, from Young, has already walked more than half of the 96km and had planned to walk from Young to Boorowa, but was unable to get approval through her local council. However, it won’t stop the emergency services volunteer, who fought on the frontline during the Black Summer bushfires in 2019-2020.

She also has friends in the military and says there is nothing more important than being a voice for people experiencing post-traumatic stress disorder (PTSD) from their military service.

“One of my best friends is a veteran and he’s lost comrades through suicide,” says Elle. “They’ve done so much for their country and, unfortunately, they’re silently screaming for help and they’re not getting the help they need.”

You can support Elle via Elle’s March On With Soldier On Facebook page, and find out more about the challenge at the March On fundraising website. 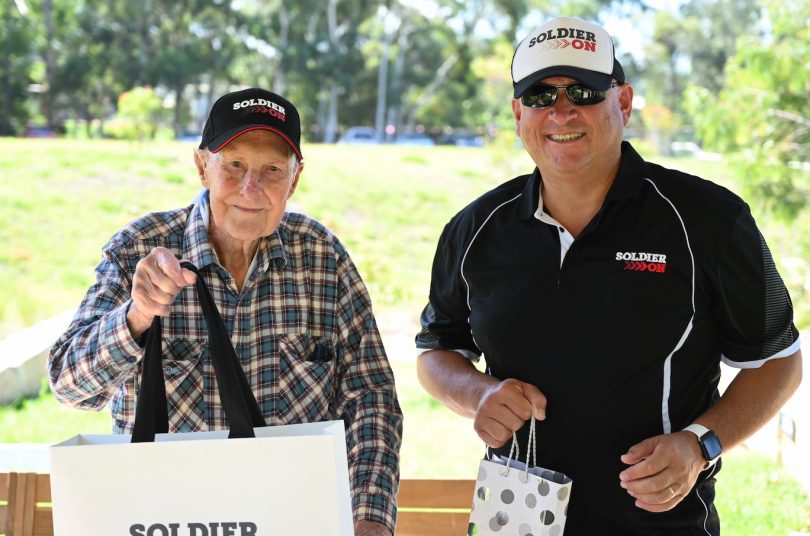 102-year-old Sergeant Bert Le-Merton (left) is the patron of March On With Soldier On. He’s pictured with Soldier On CEO Ivan Slavich. Photo: Supplied.

On the first day of the March On With Soldier On challenge, 1862 donations were received, which raised $108,309 for the campaign, which Soldier On CEO Ivan Slavich says has been an astonishing response.

“It’s no secret that many of our servicemen and women – and in turn their families – face significant and unique post-service struggles, including difficulty finding work, post-traumatic stress disorder and feelings of isolation,” he says.

“The suicide rate among Australian veterans is simply unacceptable.

“It has been fantastic to see people all over Australia getting out there and starting their March On challenge together. It is this simple act that not only shows veterans that we stand with them, but also goes a long way in providing them with the services they need to thrive.”

Every dollar raised as part of the March On challenge goes directly to services Soldier On provides to current and ex-service personnel and their families, with a range of mental health and wellbeing, employment support and education programs to help prevent veteran suicide.

March On patron, 102-year-old retired Sergeant Bert Le-Merton, has already completed more than 192km for March On and continues to march every day in support of contemporary veterans.

Bert has raised more than $110,000 for March On and is an inspiration to many people.

“I thank all those members of the public who have assisted Soldier On by taking part in the challenge and making donations,” he said.