Macca’s to open combined restaurant and service station in Phillip 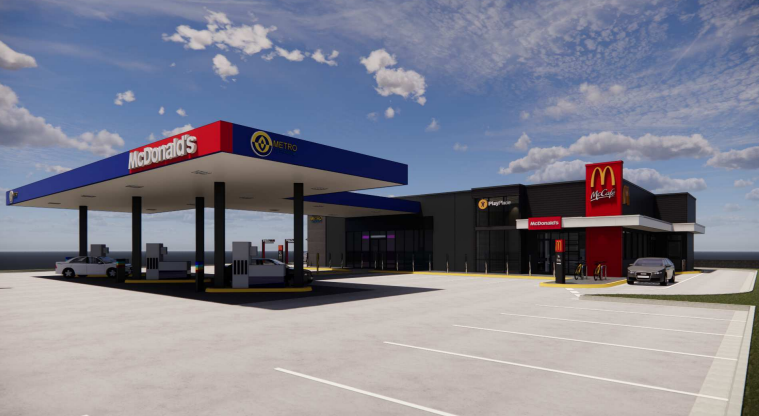 An artist’s impression of the proposed service station, restaurant and drive-through, from an exit perspective. Images: Richmond and Ross.

The 2,581 square metre site (Block 7 Section 25), within the Phillip Services Trade Precinct on the southern side of Hindmarsh Drive, is currently occupied by pop-up fast food outlet Grease Monkey.

It is opposite the Woden Town Centre, where a high-rise apartment boom is under construction, and thousands more people will soon live.

The petrol service operator is not named, but artist’s impressions of the project show a Metro-branded station, which generally provides discounted fuel, so motorists should benefit from the increased competition in the area. 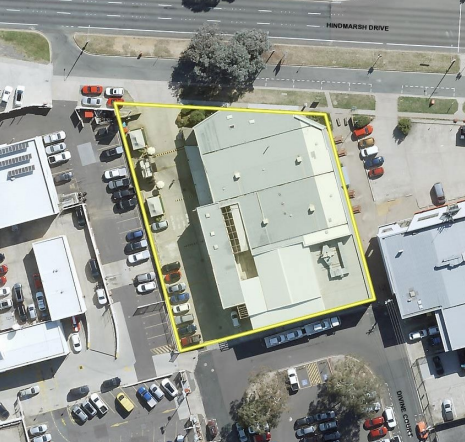 An aerial view of the site. Photo: ACTmapi.

The restaurant will include an entrance, counter area, dining room, children’s play area and accessible amenities, as well as back-of-house facilities.

A canopy of about 361 square metres will protect customers from the weather.

Vehicles will enter and exit via separate driveways on Hindmarsh Road, while the existing driveway access from Divine Court will be removed.

An entry view of the proposed development.

The driveways will cater to petrol tankers and large trucks, which will make their deliveries in quiet periods.

Trucks delivering to McDonald’s and the convenience store would reverse into the loading dock, adjacent to the dual drive-through, which will provide queuing for 15 cars clear of the access and car park circulation, with queuing for eight cars from the order point.

The traffic report says that the proposed development would generate about 320 vehicles per hour (two way) in the weekday morning and afternoon peaks.

But it says linked trips could cut this by a quarter to 240 vehicles an hour (two ways).

The report says that most patronage will come from passing trade, and that the net increase in traffic on Hindmarsh Drive will only be about 50 vehicles per hour or 1 per cent, which will have minimal effects on traffic flows along Hindmarsh Drive or the Melrose Drive and Ball street lights.

The car park will have 17 spaces, including an accessible space, while racks at the front of the building will hold four bicycles.

The site will be landscaped with a range of trees, shrubs and groundcover species.

The proposal also seeks to amend the lease to add ‘restaurant’ and ‘service station’ use.

Wondering if McDonald's could also put in Disability toilet with a Ceiling hoist that would be amazing for Family's passing through.

Or even look at doing this for McDonald's Sutton Forest both side or near highway.

Perth be like we already done that a few times

Want fries with your fuel

Sheldon Paxton should we go halves

Why can’t Bunnings combine with Maccas ! We have enough servos in Woden but lack a hardware store.

Least Phillip will have a drive through Maccas Shani Jayd

He will be cancelled.

Can we have a grease monkey / servo instead

We don’t need another fast food outlet, we need hardware and useful services!! It sucks to have to drive to another town centre because Woden is no longer serving the community around it.

Can we get a Bunnings instead? 😜

I guess the reason for no EV points is that you don’t pay mega bucks for a prime commercial space ,then to have cars sit there refilling for 30 odd minutes while the car occupants loiter over a coffee, and then use the toilets , which from reading Riot is what apparently you do ( must be in the cars manual re charging procedures )

Yes, this will reinforce Woden’s claims as “Paris of the South”. The hooks of Hindmarsh drive will also enjoy cheaper fuel than offered at the Cotter Road abomination

So instead of having 2 separate buildings on the one site, now they're combined!

What a wonderful cultural land mark.

Ben Jones - 8 minutes ago
Mary Gaskill ?? View
Helen Kvalheim Stephenson - 31 minutes ago
We left in 2017. We were lucky. They were only looking after there own interest and charging exorbitant prices for that advis... View
Colin Parton - 31 minutes ago
Farhan Khaliq maybe. Lots of stories to tell. View
Opinion 61

Jason Benjamin Law - 8 minutes ago
No sports star or celebrity deserves a pedestal. View
Nigel Kirk - 10 minutes ago
Straight shooting, Tim, very good 👍 View
Camille Martin - 56 minutes ago
Milenko-Slavenka Jovanovic then what is it to you either? View
News 13

Amy Broadhurst - 8 minutes ago
Beth Gratton looks like it’s finally happening! View
Errol Jobsz - 1 hour ago
$10 million won't go far on that road. View
Brett Griffiths - 2 hours ago
Excellent! It’s the best bypass road, onto Jerangle then Bredbo, for when the Monaro highway is shut down, as it was recent... View
Opinion 142

JC - 2 hours ago
Is it the place of government or media to commemorate someone in that way? Whilst I cannot imagine what it would be like to l... View
Futureproof - 2 hours ago
I have COVID and in isolation. I needed to see the doctor for another matter, but couldn’t due to being infected. So now, I... View
kenbehrens - 3 hours ago
There seems to be a trend to talk down the loss of someone to Covid, by referring to them as a number, minimising the signifi... View
Lifestyle 20

Linda Stapleton - 3 hours ago
Leading up to Summernats it got noisy around here. The hoons started with their fun and games as they saw it and the police t... View
What's On 2

Following the recent storms which tore through large swathes of the Belconnen and Gungahlin region, many residents have voiced their...
Opinion 142

When asked the age-old question of whether I am a cat person or a dog person, without any hesitation, I...
Opinion 378

I know it’s a generalisation, but many Canberra residents appear to have an uncomfortable relationship with anything to do with...
Opinion 139

@the_riotact @The_RiotACT
Staff shortages due to COVID-19 are hitting every industry, including government services here in the ACT, with two #AccessCanberra service centres currently closed https://t.co/r9MnF3PXCY (50 minutes ago)