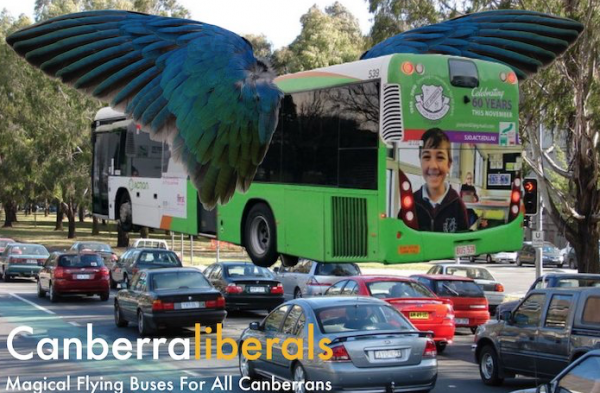 Whatever you think about light rail and the various political parties’ commitments to boosting Canberra’s bus network, you’ll have to smile at this picture doing the social media rounds this morning. 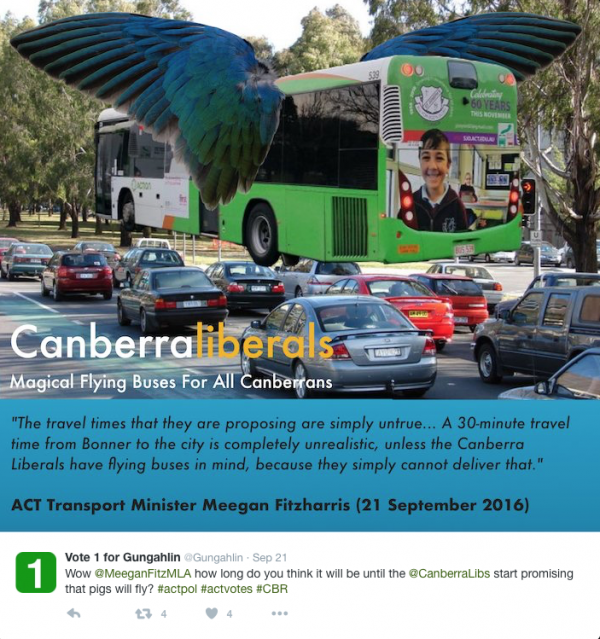 Published on the “Vote 1 for Gungahlin” Twitter account, which looks to be an anti-Canberra Liberals campaign platform, the image is in reaction to this week’s Liberal announcement about adding lanes to Northbourne Avenue and yesterday’s debate on 2CC between the Labor and Liberal spokespeople on public transport, which we covered live on Facebook here:

The archived video is worth a look if you’re interested in this issue, and in seeing politicians take over and interview each other (see the 19-minute mark onwards). Meegan Fitzharris challenges her Liberal counterpart, Alistair Coe, on a number of points around the timing of the rollout of the Liberals’ planned rapid buses.

…and more efficient than a flying boob-whale.

….and a whole lot cheaper.

Where’s the party political disclosure on the e-flyer?

Are you sure this story wasn’t intended for the other thread about astroturf?

…and more efficient than a flying boob-whale.

Will they fly to Wellington ans Singapore too?

Barr would go for that.

Makes it look like it comes from the liberals.
Our shows the maturity of Megan and her party.

For reference didn’t Labor also promise reduced times of 10 minutes for a 25 minute tram. As well they promised the bureau from belconnen would cut time too. Getting the nickname of the time travelling busway.

Chris Prentice - 24 minutes ago
Matthew Soall But it is a business. View
James Vetos - 53 minutes ago
A committed centre of learning excellence... Nope, a one trick business struggling under a poor business model. Should be ash... View
Liam O'Toole - 3 hours ago
Emphasis on international students. ANU is discovering the results of putting all your eggs in one basket. View
News 22