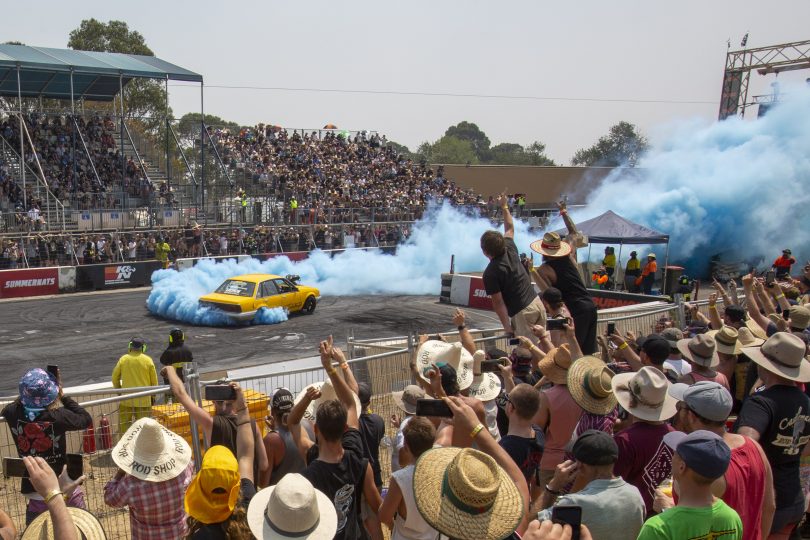 Summernats is the next big major event on the horizon and faces some big hurdles unless restrictions ease. Photo: Peter Norton.

Canberrans can look forward to some events going ahead over the spring and summer after the release of a new ACT framework that allows for exemptions to COVID-19 restrictions.

However, a cloud remains over multi-day festivals such as Summernats and big public celebrations such as New Year’s Eve unless the current crowd rules change.

Event organisers have been eagerly awaiting the release of the COVID Safe Event Protocol so they can have some clarity about what is required of them, but an ACT Health spokesperson has warned that events of more than 5,000 people will not be considered under the Protocol, except if held in seated venues such as stadiums that can hold much more than that, where up to 50 per cent capacity may be allowed.

Multi-day unstructured events such as music festivals, food festivals, carnivals and other unticketed spectator events were considered particularly high-risk due to larger volumes of people being in the same area over a longer period of time. They are unlikely to be considered for an exemption, the spokesperson said.

This includes events with long lead times such as Summernats, the Canberra Show, the National Folk Festival and public events and celebrations such as New Year’s Eve, Australia Day, the Multicultural Festival and Enlighten.

Some events may also not be able to go ahead in their familiar form. Summernats is working on a reduced and more dispersed format to minimise its COVID-19 risk.

The Health spokesperson said organisers of events scheduled well into the future should make a risk assessment of whether, and how, their event will be able to proceed in light of the changing circumstances of the pandemic.

The current Stage 3 restrictions are next up for review on Thursday, 1 October, and the Chief Health Officer may decide on an easing, with the ACT not having a diagnosed case of COVID-19 for more than 10 weeks.

But event organisers are also being warned that if the situation changed for the worse all bets would be off.

The Health spokesperson said the ACT Government was already working closely with some major event organisers, including its major hirers at EPIC, to help them progress events in some form in a way that they are COVID-19 safe and risks are minimised.

The government was urging major event organisers to consider structuring their events in a scalable way, and consider alternative ways to deliver them in line with the Protocol.

The National Folk Festival may not be until Easter but it faces a decision about if and how it may go ahead. Photo: File.

All event organisers will be required to have a COVID Safe Event Plan that considers the health and safety of event staff, volunteers, patrons and the broader community, with Class C events also requiring a Risk Management Plan.

The Event Assessment Committee will include representatives from the Office of the Chief Health Officer; the Chief Minister, Treasury and Economic Development Directorate; ACT Policing; Access Canberra; and Transport Canberra and City Services. The Committee’s key role will be to review and assess Class C event proposals.

The Committee can also draw on specialist advice from other Agencies.

It may also assess Class B events if the Office of the Chief Health Officer believes they are too complex.

Assessment of Class C event may require a lengthy interaction with organisers.

The Committee will take into account the quality of the COVID Safe Event Plan and risk mitigation planning, including any innovative approaches.

Other factors include the characteristics of the event and venue, its location and size, duration, whether it is indoor or outdoor, crowd flow, ventilation, arrival and departure arrangements, event activities and the capacity of event organisers to apply prevention and control measures.

The government recommends that organisers submit their application at least three full weeks before the event, and ideally up to two months ahead of time.

ACT Government-organised events would be treated no differently from private events, the Health spokesperson said.

Be a bit crook if the summernat burn outs are not staged .
Where will parents take their young kids to get a really good chance of inhaling big mobs of burning rubber, as shown so strikingly in the photo accompanying this article…. And all done with Guvy approval ! You certainly can’t do it at home .
Be very unfair if its blocked .. strangely by our Health people.?
So hopefully Health will give it the OK and kids can enjoy themselfs.