Man hands himself in after Dog on the Tuckerbox vandalised 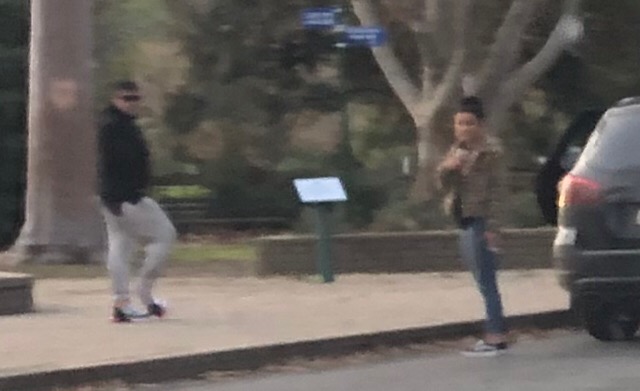 The passing motorist took a picture of a man and woman at the scene. Photos: Supplied by NSW Police.

A man has handed himself in to police after the Dog on the Tuckerbox statue in Gundagai was vandalised on Saturday afternoon (27 July).

Around 4 pm, a motorist travelling along the side of the Hume Highway in Gundagai noticed a man vandalising the cherished statue. The dog and tuckerbox were dislodged from the base of the statue, falling into the surrounding fountain, knocking off an ear in the process.

Riverina Police District officers were notified and commenced their investigation.

On Monday morning (29 July), police released images of a man and woman whom they would like to speak to, resulting in a man handing himself in to police a few hours later.

The 28-year-old Wagga Wagga man was taken into custody at Wagga Wagga Police Station and charged with one count of destroying or damaging property.

He has been granted conditional bail and is due to face Wagga Wagga Local Court on 11 September.

Anyone with information about this incident is urged to contact Crime Stoppers: 1800 333 000 or https://nsw.crimestoppers.com.au.

Ashley Wright - 8 minutes ago
Josh Shirley and when did you buy this property and how much equity did you have when you brought? View
Ashley Wright - 12 minutes ago
Candace Driscoll they never make more than market value of the property. Whilst rent is based on a percentage of income of al... View
Josh Shirley - 4 hours ago
I had a 3 bedroom 2 bathroom townhouse in Melbourne 30mins from the city and the mortgage was $200 a week cheaper than any re... View
Lifestyle 18

Old dog given new life thanks to ANU artist

Second arrest after man hands himself in for Theodore shooting