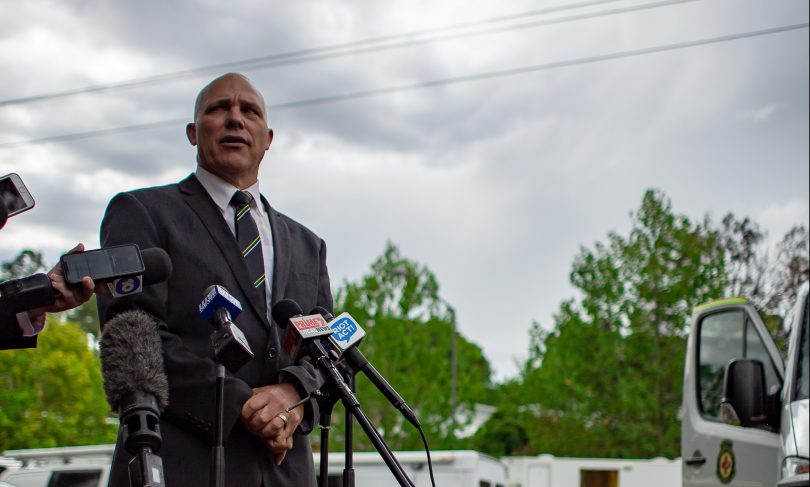 Detective Superintendent Moller said police are yet to identify a specific target of the threat. Photo: George Tsotsos

A 28-year-old man faced court this morning (3 April) for threatening to act with intent to cause public harm after a tipoff to the National Security Hotline.

ACT Policing executed a search warrant at a home in Griffith on Tuesday afternoon (2 April) where the man was arrested. He was then transported to a police station where he was charged with “significant offences” including possessing an object to kill or inflict grievous bodily harm, threatening to act with intent to cause public harm and using a carriage service to menace, harass or offend.

It is believed the man was working alone and Detective Superintendent Scott Moller stressed there is no ongoing threat to the public.

“I would like to stress at this time that there is no evidence to suggest that this man was working with anybody else or within a group,” he said. “However, police are pursuing every available opportunity and every line of inquiry.”

During the search warrant, police also seized “significant evidence”, which has been submitted for forensic examination but Detective Superintendent Moller would not confirm what objects or if any firearms were seized.

Detective Superintendent Moller said the man was not known to police and stated police are yet to identify a specific target of the threat. He would not comment on the man’s motivation or if it was a suspected terrorist attack.

He would not comment if the man made threats via social media or phone calls.

“ACT Criminal Investigators work tirelessly to keep the community safe and will always act quickly to disrupt any activity or individual we think is a risk,” Superintendent Moller said.

“The local community should feel safe knowing we and our partners are working together to investigate all individuals who come to our attention.

“In this case, I would like to reassure everyone we have not identified a specific target, and there does not appear to be any ongoing threat to the community.

“The matter is ongoing and we will continue to investigate the incident. There is every chance there will be further charges.”

“I urge the public that if you see or hear something suspicious or something that doesn’t seem right, to contact the National Security Hotline on 1800 123 400,” he said.

The man has been referred to a mental health assessment following his appearance at the ACT Magistrates Court today.