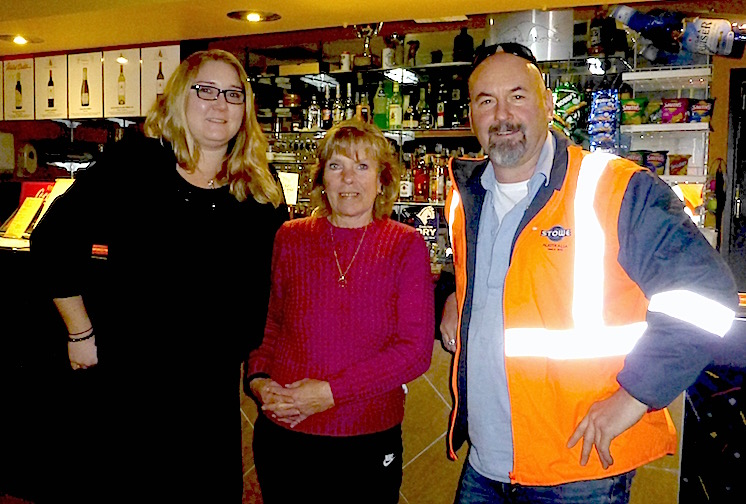 Chisholm Tavern regulars Leah and Glenn with manager Jennifer Hunt (centre) are keen to see the venue remain as is. Photo: Michael Weaver.

A proposal to build a McDonald’s restaurant on the current Chisholm Tavern site in Tuggeranong remains in limbo.

A petition with more than 700 signatures against the proposal will be presented to the ACT Government and then referred to the relevant ACT Assembly committee for review.

News of the proposal has angered many locals who don’t want to see another fast food outlet in the area.

“There are more than enough of these outlets within only a few minutes. I pray the relevant authorities can take notice of our objection,” said one of the many to comment via social media.

“Beer and good mates are healthier than Maccas,” said another.

Unfortunately, the option to have a combined version, dubbed the McTavern, is also not viable.

The Minister for Planning and Land Management, Mick Gentleman, told the Region Media that Chisholm Village Pty Ltd has submitted a development application to remove the existing tavern and construct a McDonald’s Family Restaurant. This would require purchasing an adjacent publicly owned piece of land (a toilet block).

“They must pay a lodgement fee to progress the application and it would be assessed by the independent Planning and Land Authority through its standard process. This would include a public notification period for the local community to make representations,” said Mr Gentleman.

It is understood that Chisholm Village Pty Ltd has not paid the lodgement fee.

The proponent would then pay market value for the publicly owned land based on the highest of three independent valuations.

There are also concerns about the adjoining BP Service Station at Chisholm, where a major fuel leak in January 2007 resulted in the loss of around 65,000 litres of unleaded fuel into the surrounding environment.

A spokesperson for the Environment, Planning and Sustainable Development Directorate confirmed the Environment Protection Authority is still regularly removing fuel from the site to prevent further contamination.

Member for Brindabella and Chisholm local Joy Burch MLA has canvassed the views of residents about the proposal.

“The majority of comments from residents are not in favour of more major fast-food chain outlets,” Ms Burch said. “Most would like to see more alternatives offered in any future development and upgrades to existing facilities, including the play area and a family-friendly tavern.”

Ms Burch said when she was approached to sponsor the petition, she immediately saw the value in listening to the voices of the business owners and the local community.

“The loss of any of the businesses as a result of any proposed development is not at all desirable,” she said. “The petition recognises the local community’s interest in any future development at the Chisholm village and that the community wants to have a say in what that looks like.”

Chisholm Tavern manager Jennifer Hunt has operated the business for 28 years and said the petition and comments heartened her resolve to stay.

“We offer a venue that supports the local community, doesn’t have gambling and regularly has live music, and people come here for that,” she said.

Many local bands played their first gigs at the Chisholm Tavern, and the potential redevelopment of the site follows the closure of the Valley Tavern in Wanniassa in February.

“The Chisholm Tavern is one of the few remaining live music venues on the southside and needs to be looked after,” said a local musician on social media.

Chisholm Tavern regulars Leah and Glenn also voiced their concerns about the proposal.

“We really need to keep places like this going,” said Leah. “It’s not fair on small businesses and we definitely won’t be leaving without making ourselves heard.”

No no no to Macdonalds leave Chisolm tavern alone

Where's the petition FOR the proposal? I'm sure it would far surpass 700

The reason McDonalds is setting up there is they know there is enough business going through Erindale to support it. I would hate to be a Maccer’s franchisee.

Blame the people that will go there.... If no one walks in they won't hurt other businesses

There are enough maccas within a short distance from Chisholm that its not needed, and may hurt the profitability of those other stores so I can't imagine those franchise owners would be thrilled. Chisholm already has a bunch of other take away options as well so the type of store isn't what's needed either.

No one wanted the KFC at gold creek either but its been built in record time. Locals petitions didn't help.

Scott Harvey whilst I don’t want a KFC at Gold Creek either fact remains residents don’t get a say in which brands open where. Don’t want the business don’t buy there.

Scott Harvey just wondering why residents didn’t want a KFC built at Gold Creek? As a resident in Casey, the petition must have been before I moved here, but I am glad there is another fast food option other than McDonalds. Gungahlin is a nuisance to drive around at night, so a quicker drive to Gold Creek will be great.

Blame the people that go there.... If it makes a profit and kills business, the only people to blame are the customers

We are local and never saw or heard of any consultation...absolutely don’t want or need another McD restaurant there! If they want to build a complex put it on the Monaro highway near the Servo, they are crying out for tourist places like that, only have to see the traffic going to the snow with nowhere to stop!

Brett Griffiths do you ever look for development signs or regularly scan the developments open for comment online? That’s when you get a chance to be consulted.

That said as I mentioned above re the new KFC at gold creek residents don’t get a say in who occupies a space just the use of the site, and even then you would have to have one hell of an argument.

Best way to protest is to not even step a foot inside.

I was wondering what could be dodgier than the tavern...

We don’t need another McDonald’s, if I want to go to McDonalds I can simply go to Erindale.

If it was a guzman n gomez I bet people would be happier.

Dont need it, dont want it. If i want maccas, i go to erindale. 2 mins down the road. Id prefer the tavern than maccas

Definitely not required, there are enough

Michelle Cooper - 4 hours ago
And some of us have both. View
Daniel Duncan - 5 hours ago
Julie because of Covid-19. Once it ends it will go back up. View
JS9 - 5 hours ago
Can someone explain to me why precisely we need a facility to process this stuff in Canberra, beyond some ridiuclous idea tha... View
News 9

Chris Sant - 5 hours ago
Gladys is an absolute disgrace. Completely ridiculous to suggest that people who have been doing essential work in country Vi... View
Denise Bourke - 7 hours ago
Anne Cahill Lambert I keep waiting to hear that the poor Albury hoteliers have been given Covid quarantining status so that r... View
HiddenDragon - 9 hours ago
If there are arrangements that allow freight from Melbourne to travel through NSW to supply ACT and NSW shops, surely those a... View
News 77

Mike of Canberra - 6 hours ago
Well, let's see how their policies stack up as we progress through the election campaign. As for a rate freeze not being a po... View
HiddenDragon - 9 hours ago
If the yet to be debunked Stanhope/Ahmed diagnosis of the ACT's public finances is anywhere near the mark, whether we end up... View
Capital Retro - 10 hours ago
"That is a political game." And that is why Labor/Greens will win again and again and again.... View
News 3

O L - 10 hours ago
Sore winner? View
Capital Retro - 10 hours ago
I was amazed that Panthers player Chrichton wasn't sent off for his coat-hanger on Croker. It wasn't even put on report. If C... View
Community 4

smeeagain - 10 hours ago
What a colossal back down by the Government from their earlier stance. Another example of squeaky wheels getting the result a... View
show more show less
*Results are based on activity within last 7 days

@The_RiotACT @The_RiotACT
The summer's bushfires led to a new appreciation of traditional land management techniques - and renewed pride for the Indigenous rangers https://t.co/eiv4GFX2RB (8 hours ago)