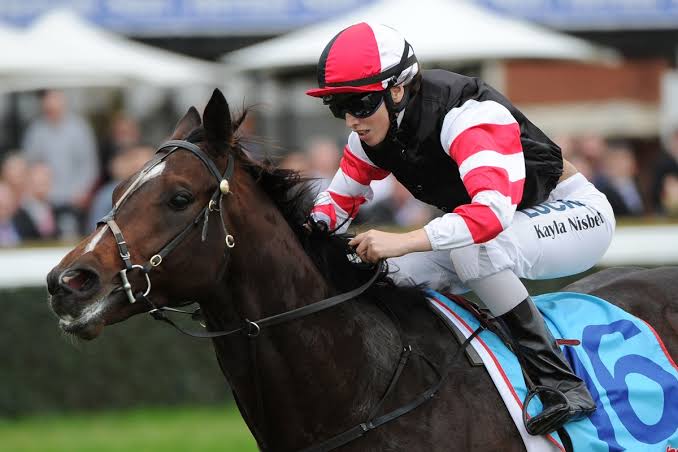 At 24 years of age, Kayla Nisbet has experienced plenty: Broken legs, fractured feet, a broken wrist, and a battle with epilepsy, which threatened her career.

Such is the life of a jockey. In the saddle most days of the week performing track work or racing, the injury toll is seen as just part of the job.

And it is a job she loves and was destined for as the daughter of leading trainer, John Nisbet. Kayla had no other career in mind when she left school in Year 10.

Kayla recalls, “I was always going to be a jockey for as long as I can remember.” She competed in her first race as a 16-year-old.

Her most confronting time, however, was not on the track, but it had the potential to derail her career.

Kayla had an epileptic seizure while shopping in 2016. The origins of the seizure were traced back to injuries suffered in a car accident when she was just four years of age.

Further diagnosis revealed the seizure was most probably triggered by fatigue. There were obvious concerns that she would never be able to race again.

For nine months it halted her career, with race officials only allowing her back when she gained permission to drive a vehicle again.

It was one of the toughest periods in her life.

The epilepsy is now controlled by medication and through the avoidance of fatigue. This means no early morning track work on race days and ensuring late nights are kept to a minimum. She says she is given some latitude towards the early starts, but it is not for the faint-hearted. Kayla’s alarm is set at 4:30 am: this is considered ‘latitude’ in the racing industry.

It is a regulated and disciplined life but one that won’t be forever; “I want to ride for the next three or so years, then I want to have children,” says a determined Kayla. No pressure on partner of three years, Canberra Raiders forward, Luke Bateman.

Kayla and Luke were engaged in October last year but no date has been set for a wedding.

Kayla is in a good space with plenty of rides each week from trainers, such as her father John, Luke Pepper, Gratz Vella and Norm Gardner. She has established a well-earned reputation within the Canberra racing community.

And it is an achievement, which hasn’t come without its sacrifices.

franky22 - 2 hours ago
Why can't the ADF simply state that they made a mistake. View
Peter Curtis - 24 hours ago
A mistake is questionable - using a very hot light under those conditions suggests a lack of forethought or understanding of... View
Peter Curtis - 24 hours ago
not a mistake but stupidity - if farm machinery had ignited it and not an extremely hot light there would have been charges. View
Opinion 59

Steph Maxwell - 4 hours ago
Phil Cowan Aboriginal people were not really included until after the 1967 referendum removed the section of the Constitution... View
Phil Cowan - 17 hours ago
The 26th Jan is a Public Holiday because on the 26 Jan 1949 because we ceased being British subjects and became Australian ci... View
ghutch - 1 day ago
A lot of good comments. Why don't we celebrate Oz Day on 1 Jan. Yeah I know you all still asleep from new year eve. But is th... View
Lifestyle 1

@The_RiotACT @The_RiotACT
One year after the Orroral Valley fire started, Michael Weaver investigates how the park is recovering, and the threats it faces in the future https://t.co/wywSfIKRoQ (51 minutes ago)

@The_RiotACT @The_RiotACT
A Goulburn father & son plan to fork out $65,000 to be cryogenically frozen when they die, in the hope of one day being brought back to life https://t.co/7doAIKVVFQ (2 hours ago)

@The_RiotACT @The_RiotACT
Canberra Casino is restoring its fortunes after COVID-19 dealt it a horror hand last year, and still plans to develop its prime city site https://t.co/jG6tX7wPM1 (4 hours ago)