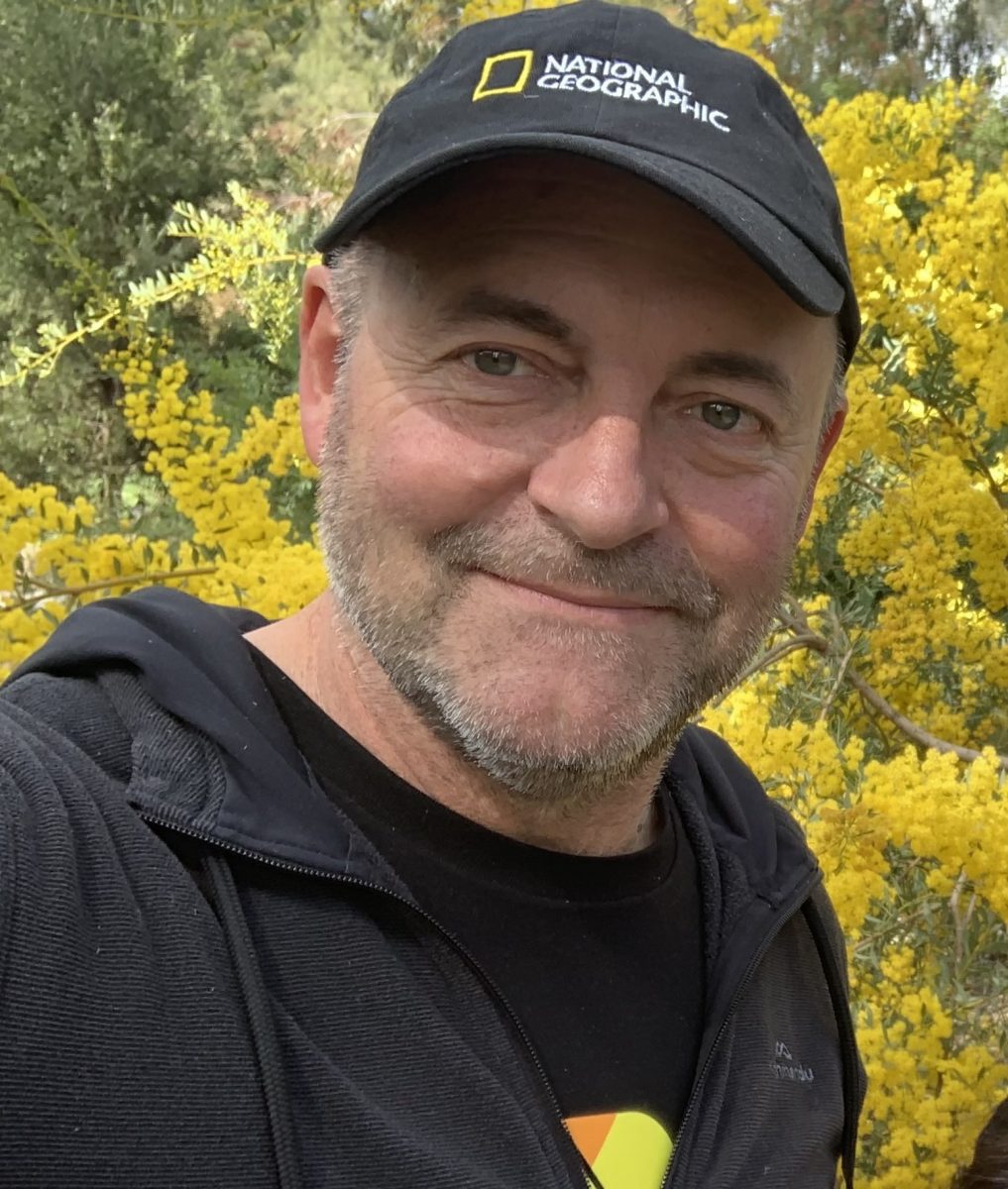 Whenever itchy eyes and running noses bother Canberra’s hayfever sufferers, chances are they head straight to a local source for answers.

Simon Haberle’s the man behind the Canberra Pollen and AirRater apps, as well as the That Pollen Guy Twitter account.

He’s been using his background in archaeology and environmental science to let Canberrans know what’s getting up their noses for years.

“Ever since I was a young lad on a Tasmania farm I’ve had a fascination with the natural world and how people have changed it over time,” Simon said.

He came to Canberra to study his undergraduate degree at the ANU, and said he was “amazed” to find the university had a lab which specifically worked with pollen and how it could be used as an indicator of environmental change.

He ended up becoming interested in the area of paleoecology, using pollen as a record of the past.

“Amazingly it doesn’t disappear, it can be found in the oldest fossils in the world and is so robust it can be preserved for hundreds of millions of years,” Simon said.

The ANU has one of the largest records of pollen in the Southern Hemisphere, giving Simon the chance to branch into his next field of interest: aerobiology, studying the impact of particles in the air on people’s health and wellbeing.

Canberra turned out to be the perfect place to gather information.

“It’s the hotspot for allergenic pollen in Australia,” Simon said.

“Other cities get the sea air, whereas Canberra has winds blowing across potentially vegetated landscapes such as grasslands and pastures in all directions.

“Canberra is also a beautifully treed urban landscape, but many of the trees are introduced, such as elms, birches and ash trees (such as Cyprus pines). It’s quite a list of introduced trees that people are allergic to.”

While pollen levels have been sporadically monitored in Canberra since 2007, daily counts began in 2014. This enabled Simon to develop the Canberra pollen calendar, which led him to discover just how long the ACT’s pollen season could last.

“Added all together, the city has quite a long pollen season, starting in winter and going all the way into summer,” he said.

“It’s being felt too, population surveys show one in three people in Canberra suffer from impacts of allergenic pollen, especially respiratory conditions such as hayfever and asthma. The average for Australia is one in five people.” 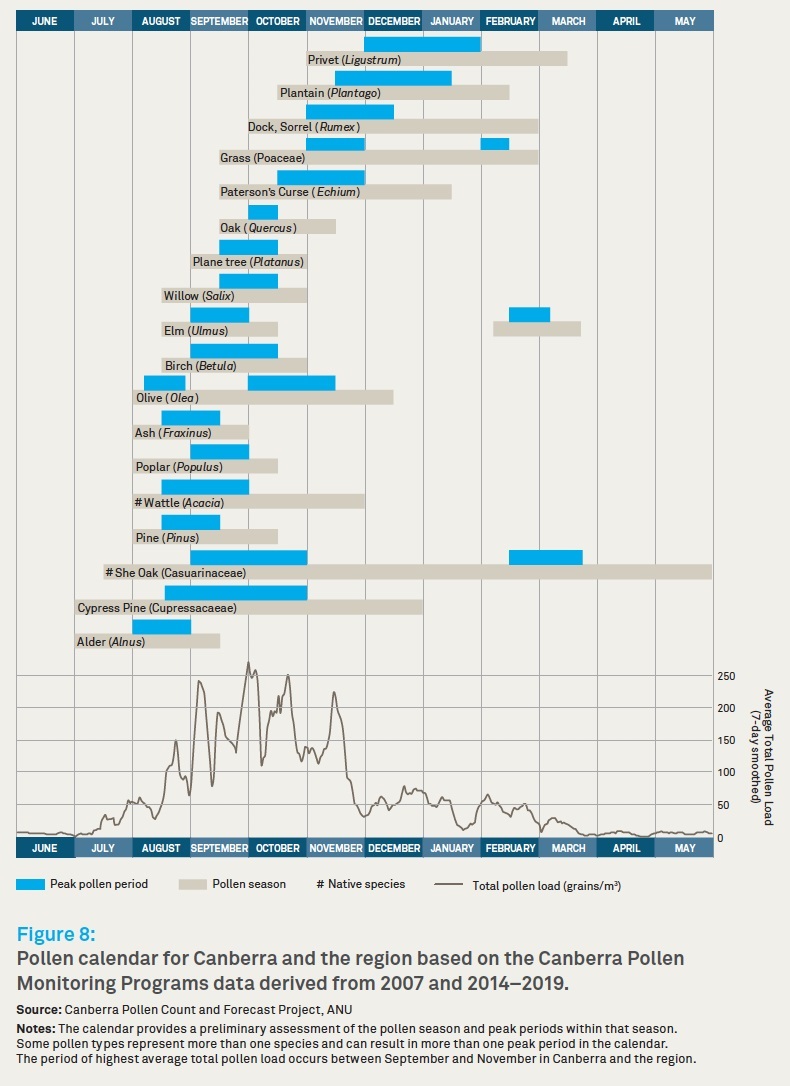 While many people blamed their freshly mown lawn or newly-bloomed flowers, Simon said different culprits were behind our allergic reactions.

“One big characteristic of allergenic pollen is it’s wind blown,” he said.

“Many flowering plants are pollinated by insects, so their pollen is sticky and doesn’t fly around, they depend on bees and the like to carry pollen to the next plant.

“But plants that cause allergic reactions develop huge amounts of pollen so the wind can pick it up, but it comes as a consequence to us.”

It’s these trees, bushes and grasses which caused massive yellow clouds to blow across Canberra.

“The worst days are when we see strong north-westerly winds on dry days, they bring a huge amount of pollen to the city,” Simon said.

READ ALSO Whip out the cake batter and ‘Bake for Babies’

Along with his monitoring systems, Simon was focused on developing ways scientists could forecast high pollen days.

“We now have a better understanding of when certain plants begin and end their pollen seasons, but now we want to see when were our most intense pollen years and how has that changed with climate change?” he said.

“Our records are short, but generally the trend we’re seeing is when we’re in an El Nino year, pollen trends to be low and the season not as severe.

“But during La Nina, when it’s wet and temperatures are warmer, we see high production in plant growth and that tends to equal high pollen production.” 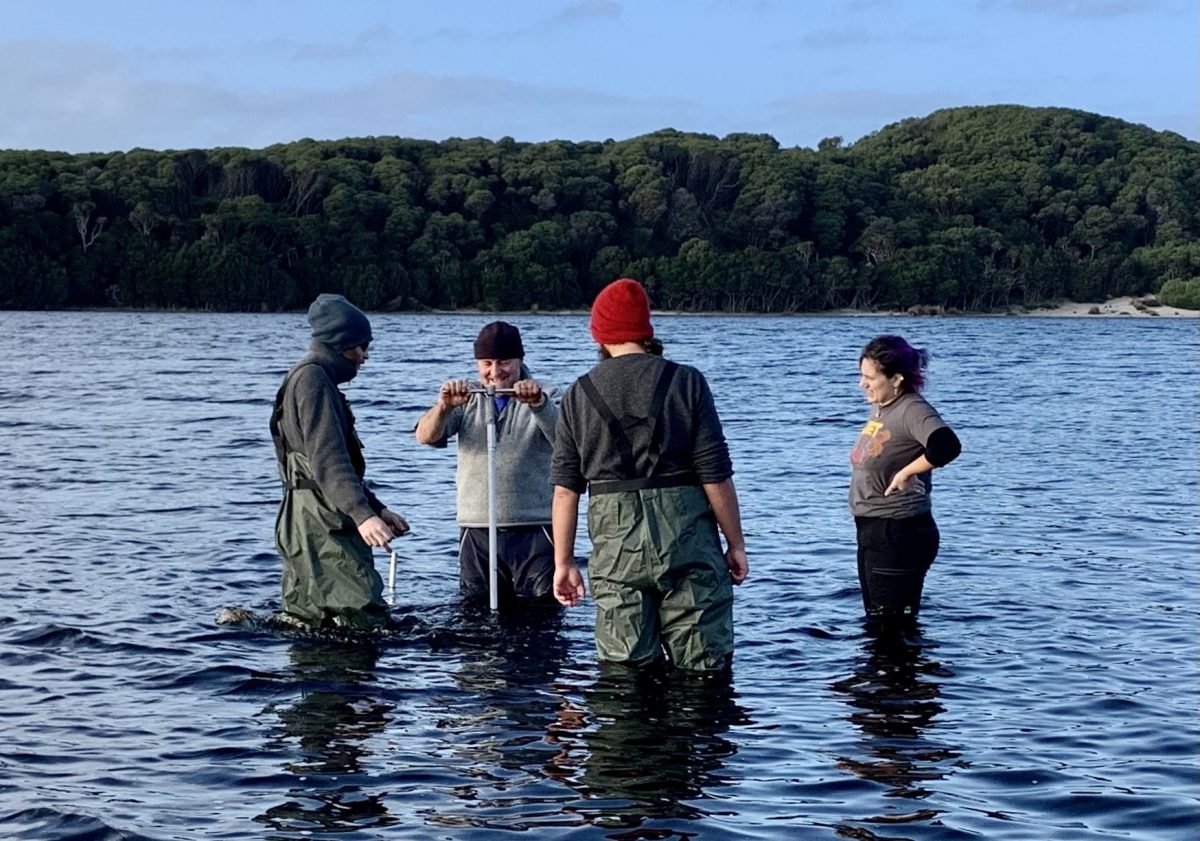 Last year (2021) was the largest year for grass pollen in Canberra, also outstripping records in Sydney and Victoria.

Cyprus pollen readings had already been picked up a week and a half earlier than usual this winter, signalling to hayfever and asthma sufferers they needed to stock up on medication.

Simon said this could be contributed to climate change, which was why it was important to continue recording the data.

“Increasing temperatures and increasing levels of CO2 in the atmosphere has led to longer pollen seasons and more abundant pollen,” he said.

“These monitoring programs that keep measuring certain aspects of our environment are really valuable, and it becomes more and more valuable the longer you do it.”

While Simon has enjoyed helping hayfever and asthma sufferers know more about pollen in the region, he also loves some of the “myth-busting” aspects of his work.

This included dispelling the “bad tree” stigma around acacia trees and their flowers, which he said many people blamed for their hayfever.

“In the next month or so they’ll start to flower in Canberra, and people notice at the same time their symptoms get worse, so the acacia gets the blame,” Simon said.

“But it’s actually because of the birch and Cyprus trees.

“Acacias are not the culprit for your hayfever, and they’re so beautiful, I don’t like it when people rip them up.”

Do people actually check pollen counts websites when their hayfever has already been triggered? When hayfever bothers me, I don’t need a website to tell me about it. However since I stopped using antihistamines and changed to a product based on a quail egg solution, my hayfever barely bothers me at all any more.

Love his work and very much appreciate it as one of the ‘one in three’ impacted by CBR’s high pollen levels!

I have bad hay fever and asthma. As well as meds etc, I find that wearing a covid mask outdoors.

It’s usually not the wattle, it’s more likely to be rye grass and cypress/pine tree pollen.

Anthea Kerrison Yep! Wattles always cop the blame! Sad isn’t it as they’re so lovely! He does talk about this in the article… ‘This included dispelling the “bad tree” stigma around acacia trees and their flowers, which he said many people blamed for their hayfever’

Emma Stewart Figured! They blame that, and it’s probably their lawns. It’s interesting some years, watching the pollen puff up from the pine forests or the cypress trees, great clouds of it.

Poor old wattles keep their pollen for the bees.