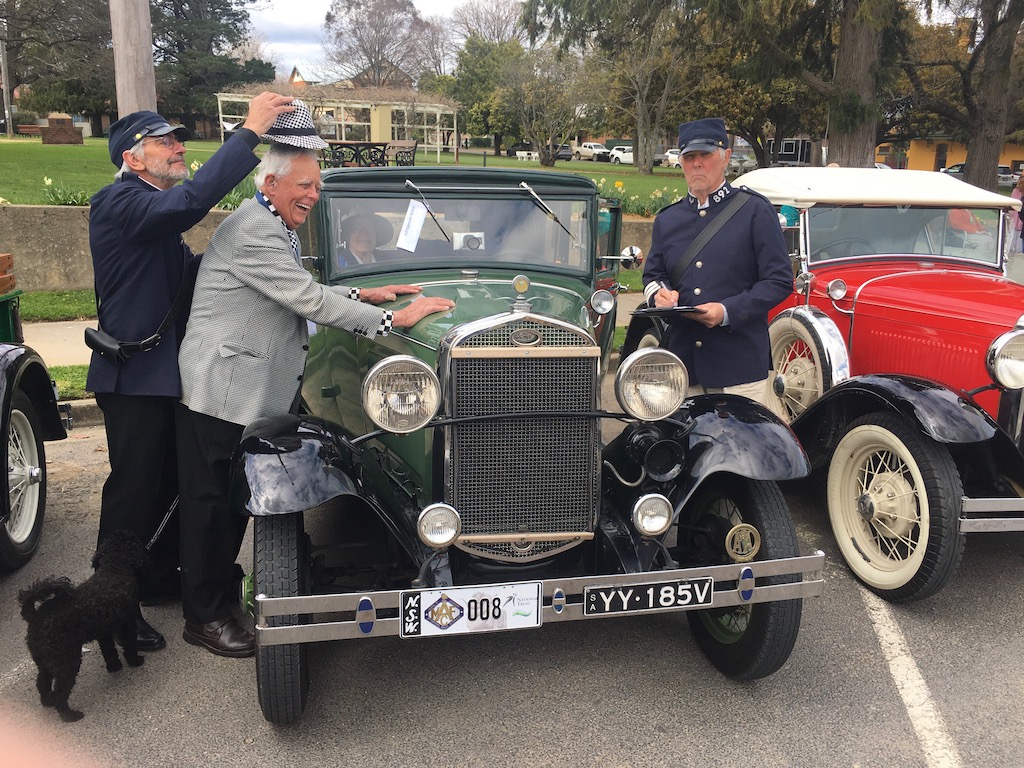 ‘Constable’ Rob Martin and ‘sergeant’ John Stahel thrust infringement notices on the shiny windscreens of more than 100 Model A Fords parked in Braidwood on Thursday morning.

The 1836 heritage village returned briefly to the days of bushrangers and pursuing police to celebrate the arrival of the 27th Model A Ford National Meet. Vintage vehicle drivers had spent the week in Goulburn, and had beetled out to Bungendore for morning tea and Braidwood for lunch when the coppers, in replica 1860 NSW police uniforms, swooped.

Among the first pulled over was Gilbert Haywood, who drove from the Adelaide Hills for the Goulburn meet, in his 1931 Ford Victoria. The stand-in police from Braidwood Museum had picked a prime suspect. Gilbert had not long ago installed a new Terry Burtz engine in the car, which has a cruising speed of 100 km/h.

“It would drag off any other of these models,” Gilbert said, gazing over the fleet of A models parking along either side of Wallace Street. He spent three months rebuilding the motor and doing a complete repaint after driving more than 1000 kilometres from South Australia to Cowra to pick up the car and take it home six years ago.

In Braidwood, speeding wasn’t the issue when the fake infringement notices appeared. They ranged from not having someone walking in front of a vehicle waving a red flag to driving in a reckless manner in a historic place so as to cause alarm that mud might be splashed.

Gilbert, a veteran of 15 vintage restorations had travelled with his wife Heather and black poodle Osca, towing their A-frame van for their temporary accommodation while in Goulburn. Like Gilbert and Heather, most of the Model A members had driven from far-flung locations in Western Australia, Queensland and elsewhere in Australia. 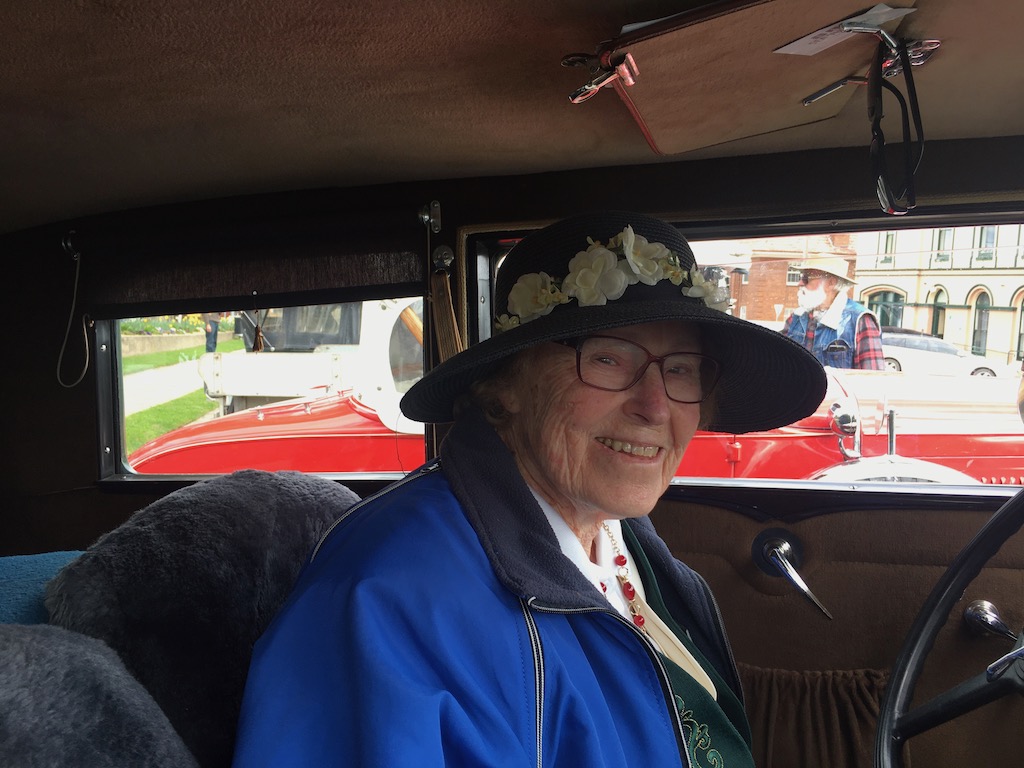 Heather Haywood in the family’s Model A ‘Victoria’. Designed as a lady’s car, the model features blinds in the back that can be drawn to keep out the sun’s glare. Photo: John Thistleton.

A Braidwood Museum volunteer, John Stahel said the police uniforms were dusted off from a reenactment in 2017 of the capture of the Clarke gang of bushrangers, once known as Australia’s bloodiest bushrangers.

Museum volunteers are taking a more law-abiding approach to making money these days. They want to permanently fund staff to look after a collection of valuable Chinese and European artefacts dating back to the goldfields, and substantial archives.

“When I started to get involved I was pleasantly shocked how amazing the archives are,” John said.

“We thought for this archive and collection to endure we need paid staff. Most small town museums are owned by the council – well in our case we (museum volunteers) own the building, the land and collection. So we thought, how can we leverage those assets to earn money?”

They now have $2.5 million from government grants and a development application to redevelop their property.

“We have a big building in the backyard that will be converted into nine workshops, where people will rent out the space and make things,” John said. “The sort of people we have interested at the moment are a goldsmith, a silversmith, bookbinders, a saddlemaker and we have a blacksmith’s shop being built. All of these crafts will run schools so people can learn.

“We will have a cafe and the big money spinner is up the back where we will have accommodation, because Braidwood lacks accommodation anyway,” John said. “So we are building a large barn-like structure, semi-luxurious, and we will charge a fair bit. Six rooms, all with ensuites and downstairs a big common area.”

The museum hopes their new venture generates sufficient income to employ one-and-a-half staff positions. These may be a curator or conservationist or the like working only one or two days a week. 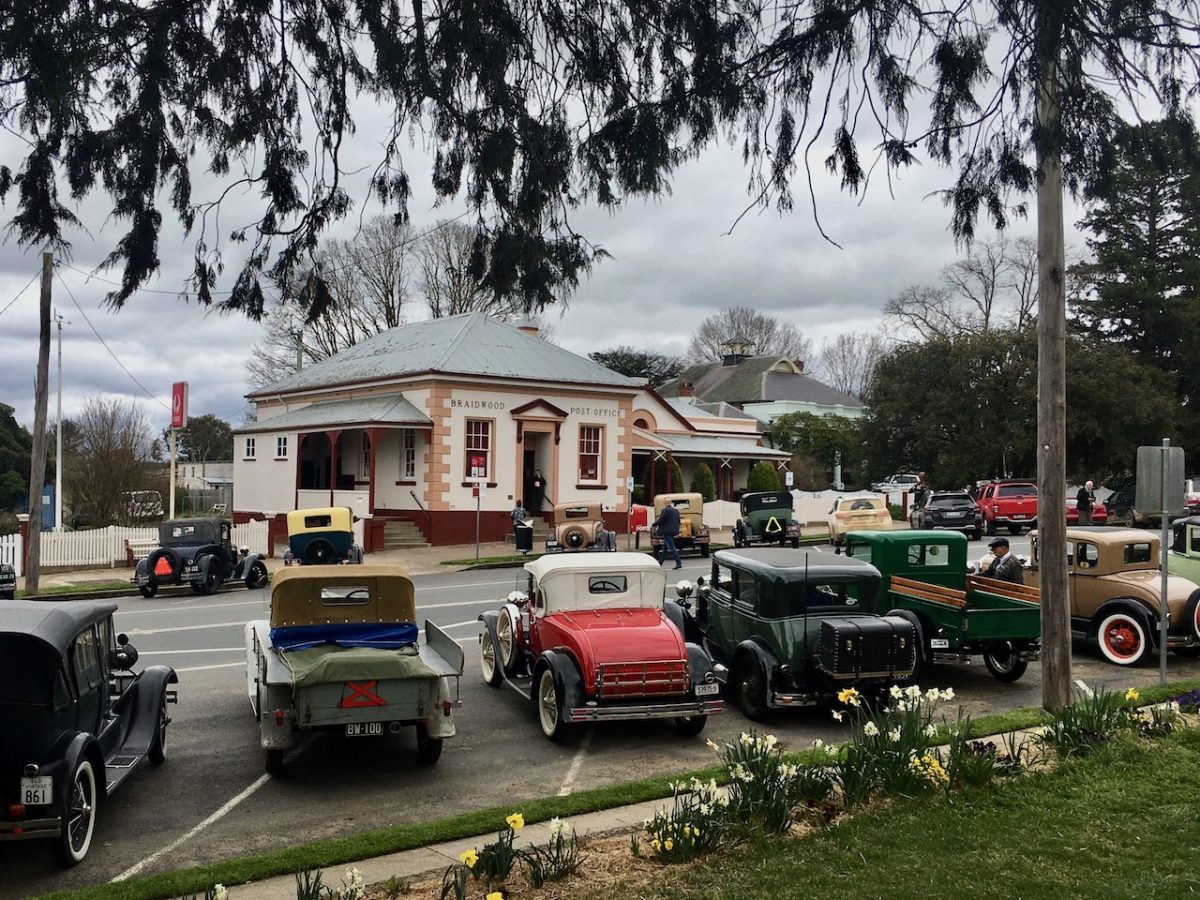 Parked alongside one another and opposite, Model A Fords reinforce Braidwood’s impressive heritage credentials. Photo: John Thistleton.

“It’ll mean we have some real money coming in, which sets the long-term viability of the whole operation,” John said.

Formerly from Sydney, he bought a historic Braidwood building 30 years ago as a weekender. He and his wife later sold their Sydney house and have enjoyed the heritage town ever since.

“It is such a wonderful community, really bright, engaged, creative people here,” said John. The Model A drivers who chuckled at their infringement notices would agree.