A man will face court after allegedly riding a blue Yamaha dirt bike along green strips and pathways in Monash over the weekend before failing to stop for police.

The 20-year-old was later arrested and charged with aggravated dangerous driving, failing to stop for police, driving on a footpath, riding a motorcycle without a helmet, driving without a licence and driving an uninsured and unregistered vehicle. He was also charged with breaching a good behaviour bond.

The man will appear before the ACT Magistrates Court this morning (29 June).

ACT Policing has reminded the public that it is against the law to ride dirt bikes and quad bikes on public parkland, including ovals and greenbelts.

The arrest came less than a fortnight after ACT Policing released footage showing a driver riding a trail bike on Melba Oval accompanied by what appeared to be a young child riding a quad bike without a helmet. 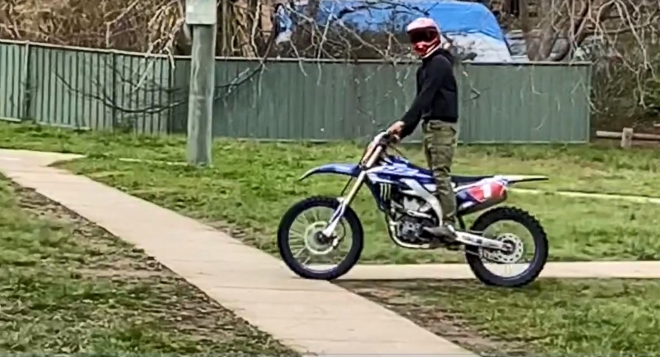 Footage of a man riding a trail bike on Melba Oval on 13 June. Photo: Supplied.

“You look at COVID and people getting out more in the parks and reserves, going for walks and the last thing we need is someone on a trail bike whizzing through a public park,” Officer in Charge of Road Policing, Detective Inspector Marcus Boorman said of the incident in Melba.

“It is extremely dangerous … they only have to strike a small child and people’s lives will be changed significantly.”

If you have footage or information regarding illegal or dangerous dirt bike riding, contact Crime Stoppers on 1800 333 000, or via the Crime Stoppers ACT website.

How is this any more dangerous than somebody on a push bike coming flying past pedestrians? At least they will hear the motorbike coming.

What’s your argument? Registered motorcycles are for the road, or bush tracks, only. They are not allowed on footpaths.

Unregistered motorcycles are not allowed anywhere…