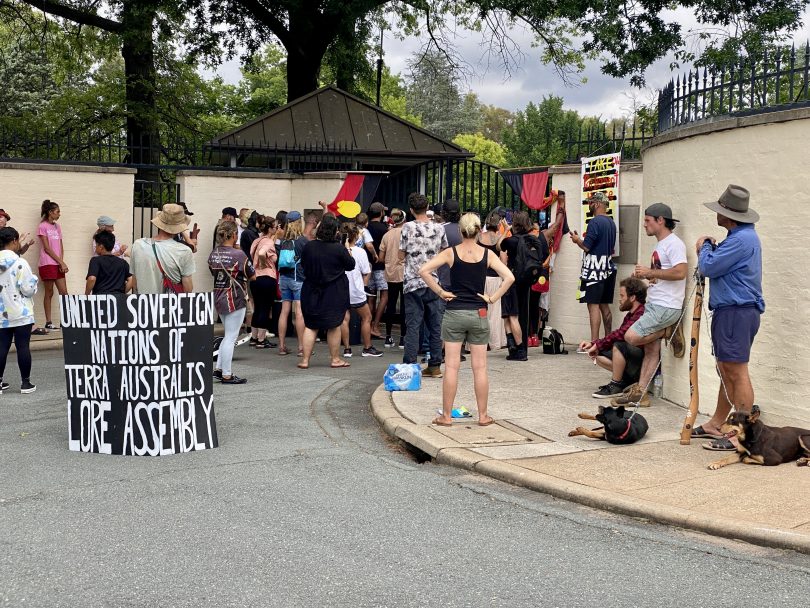 UPDATED 6 pm: ACT police say they have arrested and charged two more men for their alleged involvement in the fire at Old Parliament House on 30 December 2021.

A 30-year-old man from Bourke in NSW has been charged with aid/abet arson of a building, deface public property, aiding and abetting the damage of property, assaulting a frontline service worker and resisting a territory public official.

A 38-year-old man from Lindendale in NSW has been charged with assaulting a frontline service worker, obstructing a public official and breach of bail. Both men are expected to appear in the ACT Magistrates Court tomorrow morning (14 January).

5:30 pm: Several people were arrested at Parliament House after a group of protesters, believed to be linked to recent events at Old Parliament House, clashed with police at around 11 am today.

Protesters carrying Aboriginal flags and signs opposing vaccination were also seen briefly outside the Lodge on Tuesday before being dispersed by police.

The protesters have been linked to the sovereign citizen movement, which argues that the Australian Government has no legitimate power over them. The group describes itself as a ‘Lore Assembly’.

Substantial damage was caused to the historic front doors of Old Parliament House on 30 December when protesters are alleged to have deliberately set fire to the building. A Victorian man, whose name has been suppressed over concerns that he may face retribution, is facing court over allegations that he moved hot coals from a ceremonial fire to the front of the building and stoked the fire.

The group has been protesting in Canberra since mid-December and are camped behind the National Rose Gardens, adjacent to the Aboriginal Tent Embassy.

A statement from ACT Policing said that officers and AFP Protective Service staff responded today to a group of people attempting to enter Parliament House to protest unlawfully.

“Three men and a woman were arrested at the scene. All four have been transported to the ACT Watch House”, the statement said.

The spokesperson said OC spray, also known as pepper spray, was deployed “in an effort to control the group”. 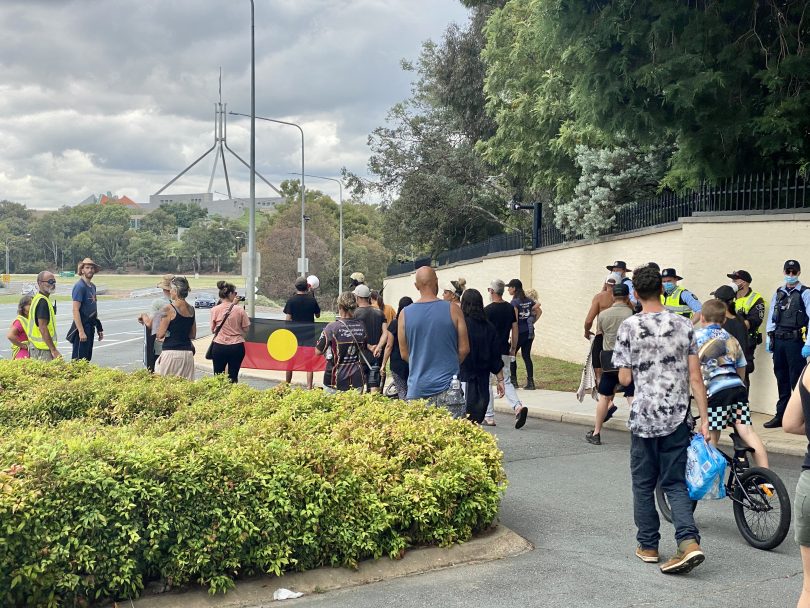 LORE protestors outside the Lodge on Tuesday. Photo: James Coleman.

Tent Embassy occupants have been swift to deny any connections with the group, as have local traditional owners.

The Tent Embassy is marking its 50th year on the site, demanding land rights, the protection of sacred sites and compensation for stolen land. It has been recognised as the world’s longest-running continuous political protest and has heritage listing.

A statement issued by the Embassy said the smoking ceremonies being carried out by the protest group were done without the knowledge or consent of the Tent Embassy or traditional owners.

Last week, Ms Hughes told ABC Radio that while peaceful protests were an important tool for Aboriginal people seeking change, she did not support the destruction of property. She said that to her knowledge there had been no consultation of any kind with the peak body representing local traditional owners, the United Ngunnawal Elders Council.

“It has no parallel with sovereign rights and land right. It’s all about the white power movement. The Aboriginal people there are being used as token blacks. Their own people are ashamed of them.”

Many other commenters are supportive of the protesters’ actions. “You are completely wrong. These people of all nationalities stand as one with the same common goal, we have been fooled for years by these nefarious entities posing as govt. We are awake to them now and must make a stand or we are doomed as a human race”, wrote one.

The protesters also attracted initial support from Greens Senator Lidia Thorpe. In response to the fire at Old Parliament House, Senator Thorpe tweeted on 31 December: “Seems like the colonial system is burning down. Happy New Year everyone.” The tweet was quickly removed.

ACT police say that the Operation Pike joint taskforce is continuing investigations to identify other people involved in the fire at Old Parliament House and other criminal activity.

Anyone with information that could assist police in relation to criminal activity in the Parkes, ACT area is urged to contact Crime Stoppers on 1800 333 000, or via the Crime Stoppers ACT website.Please quote reference 6993036. Information can be provided anonymously.

These people aren’t doing anyone any good. They are pathetic and simply looking for their 2 minutes in the sunshine. They believe that if you don’t believe in what they believe in you are completely wrong no matter what colour of skin you may have.
Professional bludgers who probably have not worked for a day in their life .

Full credit to the police. Very tolerant and restrained in a volatile situation.

The “No True Scotsman” defence seems quite amusing here in attempts to disassociate these groups.

Quite happy to take the support until the bad publicity starts…

Be interesting to know whether members of the “Lore Assembly” think they are entitled to Centrelink benefits?

Pammy Howarth - 3 minutes ago
Penny Hemsworth Absolutely. View
Milenko-Slavenka Jovanovic - 4 minutes ago
Camille Martin What is that to you, mind your own business. View
Rauny Worm - 37 minutes ago
maybe if he lived here, where billionaires don't pay tax anyway and there is no expectation of corporate giving( except to ce... View
Lifestyle 20

Grog Yogurt - 54 minutes ago
Paul South so did I, worked there for 5 years. Late 1990 from memory on a Tuesday evening (tight arse Tuesday at the movies)... View
Community 105

Linda Stapleton - 1 hour ago
Leading up to Summernats it got noisy around here. The hoons started with their fun and games as they saw it and the police t... View
Dee Tee - 3 hours ago
Plenty of notice to book a holiday in advance to get away View
Beck Bonazza - 4 hours ago
Micheal Anderson Spot on! View
News 3

Capital Retro - 2 hours ago
And this is a natural occurrence, about every 50 years. Next Canberra bushfire disaster due about 2050. View
phydeaux - 3 hours ago
Except that the ember attack critically affecting Duffy, where most houses were lost, was from the then adjacent pine forest,... View
Alex Kay - 3 hours ago
Fay Dickie move then, that huge tree was probably there well before you View
Opinion 139

Capital Retro - 10 hours ago
A lot of crime in my neighbourhood has certainly been reported, some serious home invasions included but the police media hav... View
show more show less
*Results are based on activity within last 7 days

Shoppers might be contending with increasingly bare shelves as increasing numbers of workers find themselves in isolation due to COVID-19,...
Opinion 52

Driver swap not enough to avoid arrest for driving offences, breach of bail

@the_riotact @The_RiotACT
#DixonAdvisory - for decades the first choice for financial advice in #Canberra - has entered voluntary administration due to mounting liabilities, potential class actions and penalties owing to the corporate watchdog https://t.co/3IHElcJyLS (17 minutes ago)