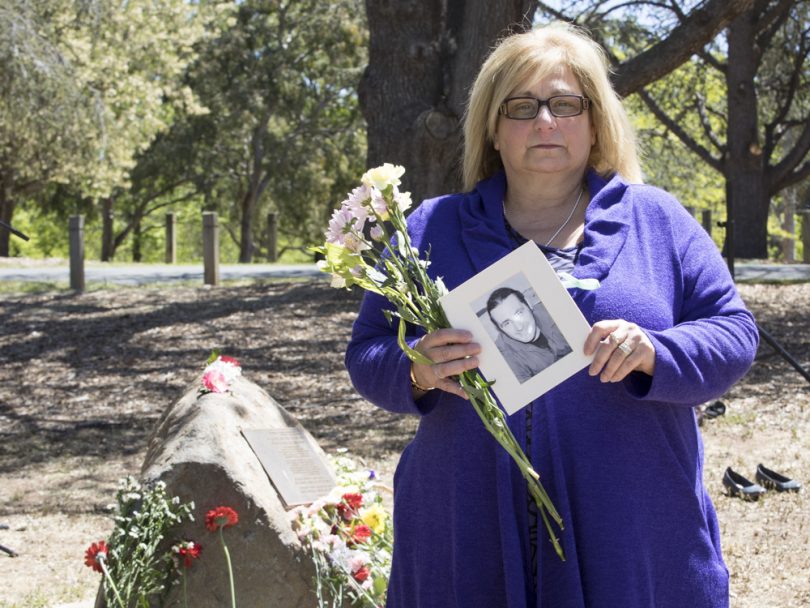 A grieving mother has called for the festivals around the nation to provide pill testing services, saying her son would still be alive if the service had been provided.

Since her 34-year-old son Daniel died of a drug overdose at a Victorian music festival in January 2012, Adriana Buccianti has been a fierce advocate of pill testing. Ms Buccianti retold her story at Families and Friends for Drug Law Reform’s 24th Annual Remembrance Ceremony in Weston Park, a service honouring the memory of those who have died from illicit drugs.

Daniel was at the Rainbow Serpent Festival in Western Victoria when he called his mum around 6:00 pm on Saturday evening.

Ms Buccianti started to get ready to drive to the festival and pick up her son, but before she left, she called him again to see how he was.

“I managed to get him again on his mobile phone around 7:00 pm but he said that I shouldn’t come and get him because he felt fine again,” she said. “He said ‘don’t come and get me, I love you and I’ll see you on Monday'”.

That was the last time she heard from her son. At around 8:30 am the next morning, the police were knocking on her door, saying they believed Daniel had died from a suspected drug overdose.

“I couldn’t for the life of me believe he was gone,” she said. “At the time, I was grief-stricken and I started calling for festivals to be closed and everyone had to go to jail. 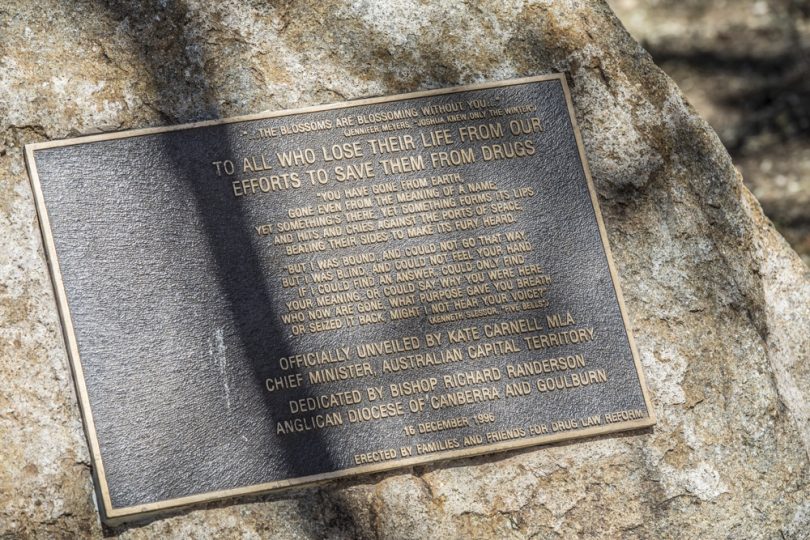 The memorial plaque erected by Families and Friends for Drug Law Reform in Weston Park.

In 2015, Ms Buccianti helped launch a petition for pill testing services to be provided at music festivals around the nation, which has gathered over 125,000 signatures.

“I didn’t want my son’s death to be a drug statistic so I had to make sure no other parent had to go through the same experience I have,” she said. “We have now had 12 deaths at festivals since 2012 and there are many others that we don’t hear about.”

The ACT Government is the only state or territory to have pill-testing service at its music festival, trialling the service at the past two Groovin the Moo festivals in Canberra. The trials have been labelled a success after seven people surrendered their illicit drugs during this year’s event.

Ms Buccianti is imploring every state and territory to follow the ACT’s lead, with the firm belief that pill testing would have saved her son’s life.

“I believe that if a pill testing service had been available, he would still be alive,” she said. “He was naive to think that the acid he took was the same stuff he had taken years ago. Not only is it important to test the substance but it is important to have a conversation.

“Regardless if people do or don’t take it, people can tell them that no drug is a good drug. The only way to guarantee to get out of here alive is not to take anything.”

The billions spent on the ‘war on drugs’ has had lukewarm success. Clearly there are pills at music festivals. Clearly there are examples of 18 year old kids dying from bad pills, and as noted below, ‘just say no’ or ‘winners don’t use drugs’ doesn’t resonate with many. Logically no life is worth losing over prohibition rhetoric when prohibition is far from fail safe and people will use pills. Condolences to Ms Buccianti on her terrible loss.

So, kid tries pill at a festival. Gets it tested. All ok. Takes pill. Has a good time.

Later on, buys another pill in a nightclub based on encouragement from previous good experience at that festival . But no pill testing there. Has a rection this time and is injured or dies. Will u supporters of pill testing at festivals then put your hand up and say “sorry – but I contributed to that by supporting the pill testing that encouraged that pill taking”. No, of course you won’t. You will use some weasel words or excuse to absolve yourselves of that moral responsibility

Already there have been calls to set up more permanent pill testing stations around town – notably in Civic. Is that the sort of place u want to live in ? Seriously ?

Neil Goodwin Will you put up your hand and say you support organised crime staying in control of the drug trade by backing prohibition?

Neil Goodwin if it saves the life of an 18 year old kid – and there are numerous examples of kids trying pills for the first time and dying – absolutely it is!

Jim Hosie you couldn’t have read what I wrote . It’s the risk if secondary deaths/injuries .

Neil Goodwin it’s not about blame.

If the regulators followed what the medical profession has said there would be drug testing units at every festival. The old tried method of ‘just say no’, doesn’t and probably hasn’t worked for years. Time to change our tack, try a different way that may just bring some sense to the senseless young people who seem to ignore the danger. The average youth brain isn’t firing on all 4 cylinders!!

The sooner that governments across Australia take the leap and say yes to pill testing, the better. We know from the vast experiment that was the Prohibition, that making drugs (in that case alcohol) doesn’t work.

Pill testing is just one part of trying to address this problem. But it is an important part, and would/does save lives.