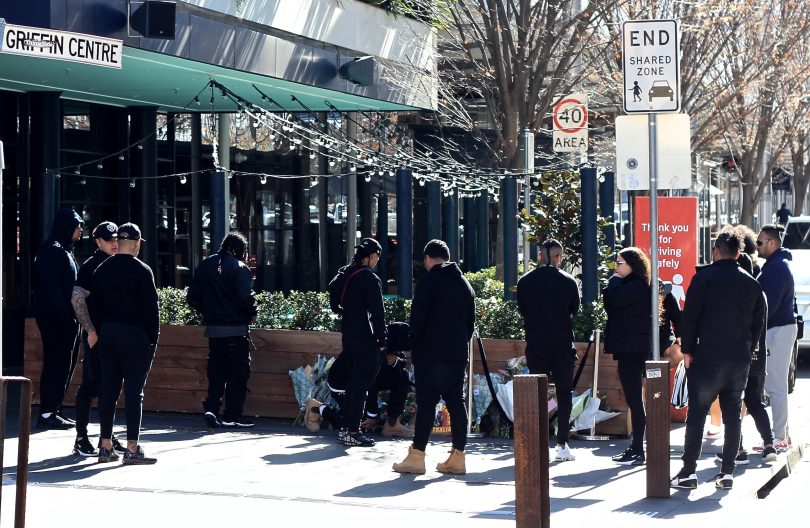 Mourners, friends and family have paid their respects to the Canberra commander of the Comancheros bikie gang who died outside Kokomo’s on Sunday morning.

The scene outside the popular Civic nightspot at lunchtime today (21 July) was in stark contrast to the scene in the early hours of Sunday morning when Pitasoni ‘Soni’ Ulavalu died on the footpath after a violent brawl inside the venue.

At least a dozen mourners paid their respects with floral tributes and notes. Some wept and hugged each other. Others came together to remember their friend and ‘brother’.

“Rest In Peace Uncle,” said a public tribute on Facebook.

“Now Uncle was many things to a lot of people … To me he was my good friend’s brother-in-law, a man who I called Uncle every time I seen him, a father, a husband and a guy who always showed me respect every time he entered a premises I was responsible for, pulling in line all those who answered to him if they were out of line.

“Someone has passed away in our community, a man such as what I’ve mentioned above, so please be respectful and celebrate life rather than point the finger to things such as Karma.”

The life of the commander of the Canberra chapter of the Comancheros Motorcycle Club ended when he was allegedly stabbed inside the venue following a violent brawl involving a number of people attending a 21st birthday celebration.

Video and images from inside Kokomo’s show a brawl with tables being knocked over and glass breaking among cries from witnesses of “what is happening?”

Witnesses outside the venue have recalled a fight moving up and down Bunda Street outside Kokomo’s. A number of scuffles occurred as more than 30 police officers and paramedics converged on the scene.

A second man was injured during the fight and was taken to hospital with non-life-threatening injuries.

Another member of the Comancheros, who police say is not a suspect in the death of Mr Ulavalu, faced the ACT Magistrates Court yesterday after being involved in a fight outside the venue. The 30-year-old allegedly made threats against a police officer and their family. He was refused bail.

The debate has again raged regarding whether the ACT should adopt anti-consorting laws that make it an offence for people to mix with known criminals.

Mr Ulavalu had been charged with affray and released on strict bail conditions following a fight inside the Southern Cross Club on 18 January last year. More than a dozen bikie gang members were involved in the melee inside the club as patrons, including young children, were eating nearby.

It has been reported that Mr Ulavalu’s bail conditions had been eased less than a week before his fatal night out in Civic.

“Everybody is quick to pass judgment about what Uncle was allegedly involved in and that’s the easy thing to do, however nobody can know what it feels like or what drives people into such a life! Whether it be poverty, upbringing or not having a sense of family and needing/wanting a sense of brotherhood to which Uncle was involved in,” the Facebook tribute reads.

“In regards to what happened, may the courts do swift justice! Everything is hearsay and rumours until the judicial system unravels the events. A street fight is a street fight! We don’t bring knives or guns to it! If we have problems with each other … we settle it outside so we don’t disrupt those trying to have a good time and we shake hands at the end regardless of the outcome! No more no less.”

ACT Policing continues to investigate the incident. Kokomo’s remains closed and the owners declined to comment further, except to say that staff members were receiving counselling and ongoing support. The venue reopened on 24 June following three months of closure due to coronavirus restrictions.

Another step forward towards anti-consorting laws, it seems.