With his album Full Circle set to launch tonight in Merimbula, followed by an almost nationwide tour, adopted Canberran Jack Biilmann is gearing up for some hectic months.

But he’s still found time to support other musicians who might not have had the chances along the way that they deserved.

“There are a lot of kids out there who could do with some guidance and mentoring along the way – getting into professional music is not an easy gig for anyone,” he said.

“I do want to give back and help out where I can.”

It was after watching a video of Tom playing guitar that Jack was inspired to reach out and set up a jam session.

This went so well that Jack offered him the opening slot for his upcoming Canberra show at the prestigious Street Theatre.

He says he was intrigued by Tom’s performance. From his own experience, he knows that tasks like playing guitar are challenging for many people on the spectrum as they involve high levels of concentration and fine motor skills.

“When I saw Tom playing, I was absolutely blown away by his talent. He has the skills of someone 10 years his senior already.

“I know he is absolutely going to smash it out there on stage.”

Now, he says Tom and his music teacher Steve Allen have been busy practising the performance over and over again before May’s big show. It will be the first time Tom has played in public, and at such a large venue, he is understandably nervous.

Besides being a professional musician, Jack works full-time at a primary school as a learning assistant, predominantly with special needs children.

Juggling music and work is tricky, he says, but he gets it done, and his workplace is largely understanding of him needing to take a couple of days of unpaid leave when he needs to.

For example, with the upcoming tour, he will only take a couple of days off when he does the Melbourne leg. He’s even timed the Queensland shows to coincide with his next school holidays. When playing in closer venues, he’ll usually head out of the city on a Friday evening and be ready to perform for the weekend.

Biilmann grew up on the South Coast and the Snowy Mountains, but he’s lived in Canberra for the past eight years. In homage to his origin story, his tour will kick off in Merimbula tonight (23 April) when the album launches.

He says the album is a return to his roots, and much of it was written during all of the extra time he had on his hands when COVID-19 put a stop to live music.

“We started recording the album in May last year, and it kept me busy when not much else was happening.”

By November, the album was done.

“I’d describe it as a mix of soul, funk, Americana and country, but it’s really right back to my old singer-songwriter stuff,” he said.

However, it wasn’t all smooth-sailing as three labels rejected the album before Jack decided to move ahead with an independent release.

Before 2020, he had been a regular on the festival circuit, sharing the stage with some of the country’s biggest artists, including John Farnham, The Cat Empire, Tash Sultana, Bobby Alu and Citizen Kay, along with many others.

Catch Jack and Tom Dunlop in Merimbula tonight at the Sapphire Club, and in Canberra on Saturday, 8 May. For full tour details, check out his website. 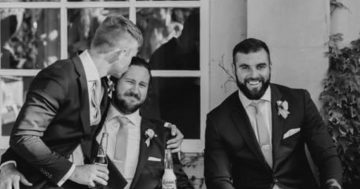