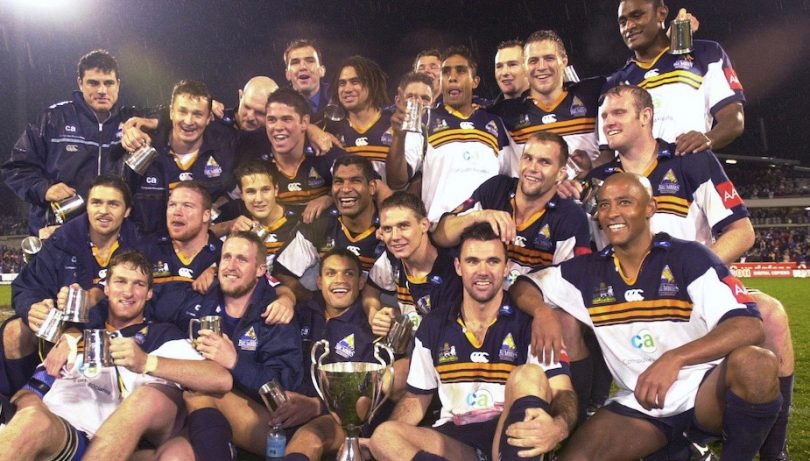 The Brumbies winning side of 2004 at Canberra Stadium. Photo: Brumbies.

Having called all six Super Rugby finals involving the Brumbies, it may surprise you, but the most memorable wasn’t one in which the Canberra team won the title.

In fact, it wasn’t even in Australia.

In 2002 the Canterbury Crusaders had won all 12 games in the lead up to the final against the Brumbies at Jade Stadium in Christchurch.

As the visiting commentary team, we were assigned a position behind the goalposts in a spare room next door to a corporate box hired for the night by a gaggle of car salesmen.

When I say ‘commentary team’, you may get the image of a number of people with specialised positions such as commentator, co-commentator, sideline eye, technician and statistician. In reality, there were only two of us: former Wallabies and Brumbies media guru, David Pembroke, and myself.

Because of budget restrictions, we had no tech or sideline eye or statistician.

Instead, I carried an oversized Globite suitcase from Canberra to Christchurch which contained all the equipment required to communicate back to Australia. I didn’t mind though, after all, it was an opportunity to call a final.

So David and I arrive at Jade Stadium a number of hours before kick-off optimistically believing that our box would be on the halfway line. It soon became obvious that wasn’t going to be the case.

We were led across the field to our assigned box behind the goalposts. It was pouring with rain. The Globite was becoming increasingly heavy but inside was the best technical equipment that the ABC could muster at the time. I treated it like gold as the Globite held everything required to successfully broadcast the game.

Exhausting what few technical skills I had, we finally made contact with ABC Master Control after I had untangled the contents of the Globite and hooked it up as best I could.

By this time, a couple of hours before kick-off, the corporate box next door had begun to fill up, as did the occupants who were already becoming well-sauced.

Just before the game was due to begin, several of our next-door-neighbours burst through the door wanting to provide an opinion for our commentary. David managed to explain to them that it wouldn’t be possible, and they retreated. 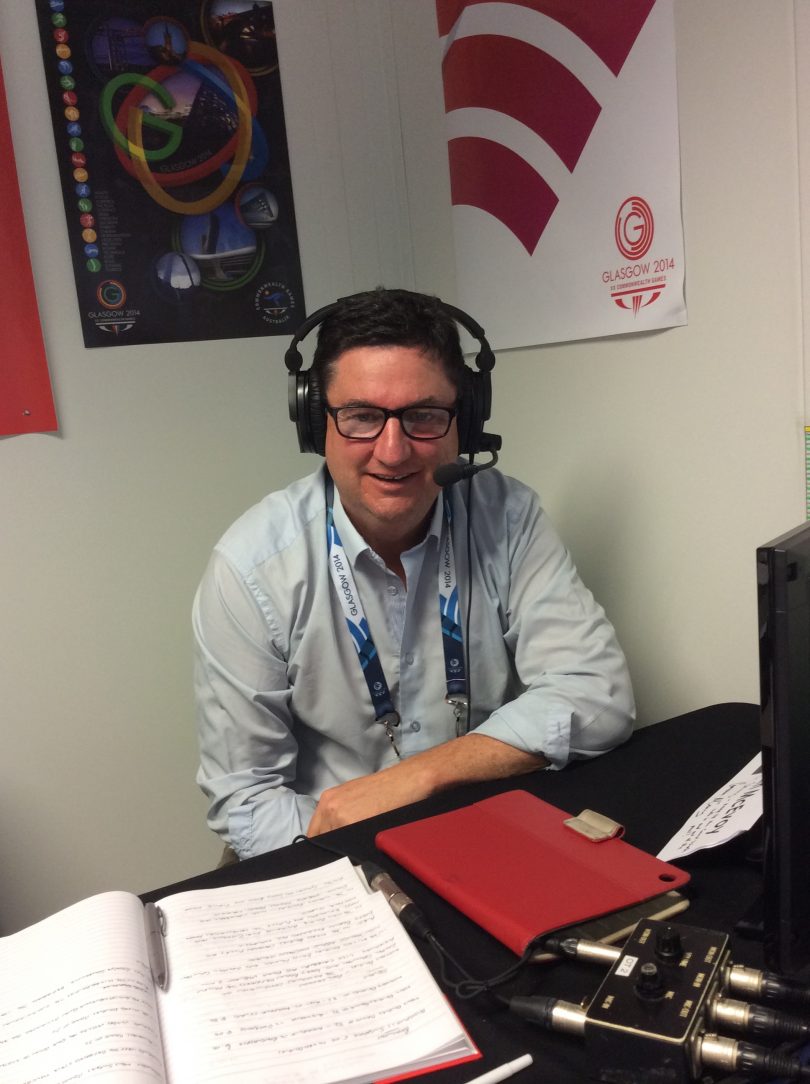 As the game progressed and the Crusaders established a lead, our friends next door felt it was important to tell the Australian audience back home just how well the Crusaders were playing and again they burst through the door. It wasn’t even half time.

It was going to be a long night.

Having managed to withstand the second onslaught and after we had ushered them back into their own box, while at the same time continuing to commentate, we decided that we would need to lean on the door while we were on air to stop them coming in.

Our defensive line seemed to work and we managed to keep the drunken Kiwis from invading again for the next 50 minutes.

But there was more to come. We thought we were safe given the game had finished and the Crusaders had won and our new best friends next door didn’t appear capable of doing much by this stage. So off we went to do post-match interviews.

I returned an hour later only to find the commentary box had been fully commandeered by our mates who had the headphones on and were singing songs down the line to an audience of one in the control room back in Sydney.

Under the belief that they had entertained the listening public in Australia for the past hour, they walked away happy.

I was left to pack up the mess.

I finally emerged from the stadium complete with my giant Globite suitcase, but because it had taken so long to clean up, all the transport options had gone and I was left wondering how I would get back to my hotel.

Luckily, one or two of the salesmen from next door were late finishers as well and I managed to get a lift in one of the cars sent to pick them up.

They insisted on taking me to a pub on the way back to my hotel. So, complete with my giant suitcase, I sat down and had a couple of beers as they told their mates of their 15 minutes of fame broadcasting back to Australia.

I managed to eventually escape and struggled back to my hotel with my suitcase.

For the purists, this was not the Brumbies finest hour, but it was memorable for me.

The best Super Rugby final involving the Brumbies was on 22 May 2004, when they beat the Crusaders 47-38 after leading 33-nil at the 20th minute. The mighty Brumbies went on that night to withstand a Crusaders fight back in the second half and emerged eventual winners in front of a crowd of more than 28,000 at Canberra Stadium.

Feeling tired after a big weekend? Spare a thought for ACT Comets batsman Blake McDonald, who has just run 162km in support of Lifeline Canberra. He's with Tim Gavel for this week's Sports Wrap to chat about his fundraising efforts, what's ahead for the cricket season, and all the latest sports results. It's proudly brought to you this week by Village Building Co.

Posted by The RiotACT on Sunday, 13 September 2020

Asha Kidd - 53 minutes ago
Is there a go fund me for these guys? View
Adam Jovanovic - 23 hours ago
You'd be surprised how many people vote for the government that screws them over the most. Mainly.because.of alarmist.and exa... View
Lifestyle 14

Jennifer Blood - 2 hours ago
Very interesting explanation of how the buildings were constructed and leased, leading to the lack of uniform upkeep we see t... View
Iaian Ross - 3 hours ago
"To have time out, she would walk to Manuka Pool for a swim and walk back in time to be ready to cook the first breakfasts of... View
Kyle Rollinson - 3 hours ago
I like the Flxible coach. View
Opinion 17

Maya123 - 3 hours ago
Some gorgeous things there, but there are only so many cushions, vases, etc, you can have, before it becomes clutter. View
Rowan Bergin - 4 hours ago
I went back there last Wednesday and bought a ring for my daughter s birthday View
Phoebe Jacobi - 11 hours ago
Dianne Thornton yes you did miss it... View
News 23