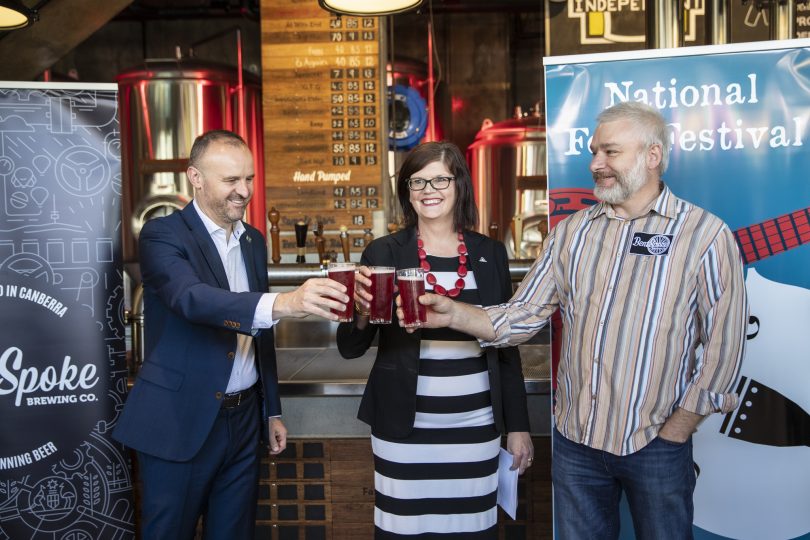 Canberra craft brewer BentSpoke will be the exclusive supplier of beers and ciders to the National Folk Festival in a two-year deal that will also see it create a custom brew for the event, aptly called BentFolk.

The two home-grown success stories have joined forces for at least the next two festivals in a deal that will be mutually beneficial, and give BentSpoke national and international exposure.

The partnership, the first of several local deals the Festival is working on, was launched on Thursday at BentSpoke’s Braddon headquarters by Chief Minister Andrew Barr amid music and street entertainment.

Festival managing director Helen Roben said BentSpoke was the perfect fit for the Festival, with an ethos and marketing strategy that suited the community-based grassroots event held every Easter at Exhibition Park.

“It’s quirky, it’s bespoke and fun,” Ms Roben said. “As a brewer, they’re going to build on that fun aspect of the Festival.”

Central to that fun will be BentFolk, a still-to-be-brewed beer that will be unique and exclusive to the Festival.

BentSpoke head brewer and co-owner Richard Watkins said the company would source some locally grown hops and malt to showcase the local connection and add vibrancy to the beer.

“The new unnamed hop varieties are grown in nearby Victoria and will add a light fruity tone and bitterness to balance,” he said. “The malt, or soul of the beer, adds the body and some toasty, bready notes in harmony with the hops creating a melody on the palate.”

BentSpoke will also supply its specialty cider and stout to the Festival, which will host a mix of draft and canned beer bars.

Ms Roben said two people would also be able to see BentFolk being made on Brew Day as part of a competition that will run over the next few months.

“To have international acts, Australian legends and rising talents across so many stages at The National every Easter is a coup for the city. Marry that with award-winning, locally owned and brewed beer, and it’s a great day all round,” he said

BentSpoke won multiple medals including a Championship Trophy at the International Brewing Awards in London earlier this year for their well-crafted brews.

The Festival hopes to announce another local partner by the end of November as part of a deliberate strategy to cement connections with the Canberra business community to build a sustainable income stream to secure the event’s future.

Good job Canberra , drink whatever you like , so long as it’s what we supply

Ridiculous. What if you don't like Bentspoke? Restrictive practices are anti-democratic. BYO here we go!

Shane Jasprizza so it’s going to be some of the best beers Australia has to offer and people aren’t happy. The great northern is available, it’s the outlet pipe on the portaloo.

Tim, yeah, I doubt too many people will be upset. Not sure what bee is in Karen’s bonnet. #drinklocal.

Now to get the same deal with the Raiders!

@The_RiotACT @The_RiotACT
In our new series celebrating the stalwarts of the Canberra hospitality industry, we drop in to Madam Lu for a taste of Malaysia and meet Ming Kong – a familiar face to many food lovers https://t.co/LFFMT38uGa (8 minutes ago)