National Gallery gets a gumtree 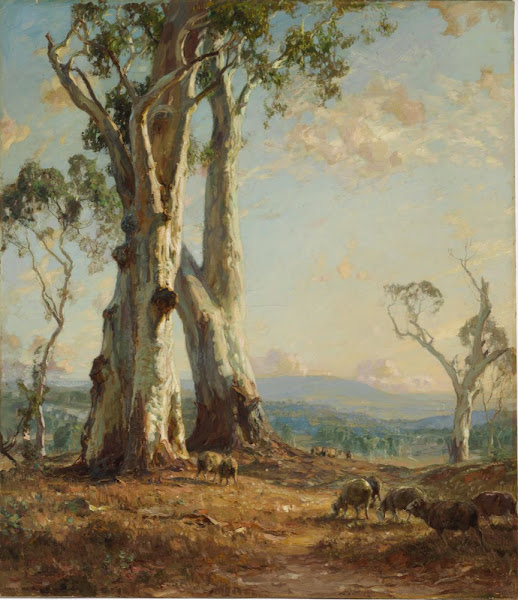 The National Gallery is letting us know that they’ve been given a genuine foundation article in the “gum tree” school of Australian painting.

The painting depicts two monumental gum trees before a sweeping pastoral vista. The grand old tree in the foreground is said to have been a favourite of Heysen’s. He was particularly enamoured of morning light and was always up before dawn in order to catch the changing landscape in early sunlight, such as the effect of a cool morning depicted in Morning light.

“We are indebted to Ms Robertson for the wonderful legacy of almost $3million that she has left the National Gallery ofAustralia. Her bequest has already enabled us to make significant acquisitions such as Heysen’s Morning light and will continue to do so in the future,” said Ron Radford AM, Director of the National Gallery of Australia.

“It is extraordinary that the National Gallery of Australia held no major iconic gum tree oil painting by Heysen from the Federation period prior to the acquisition of this work. Moreover, it is hard to believe given the popularity and familiarity of Heysen’s work, that Heysen in fact painted only a handful of major oils (seven in all) on the subject of the gum during the Federation period (1900-1914)”, he said.

And it is, I believe, the only place in developed world that bans people from taking photos there.I was jumped by a security there, they told me to remove images, and that I can buy a post card from their shop.LOL.
In other, greater Galleries of the world I never had problem taking photos, as long as I did not use flash.

A lot of galleries (so I’ve been told) prohibit the taking of photograph of special exhibitions. Apparently it’s a copyright issue. Is that possibly the case here?

And it is, I believe, the only place in developed world that bans people from taking photos there.I was jumped by a security there, they told me to remove images, and that I can buy a post card from their shop.LOL.
In other, greater Galleries of the world I never had problem taking photos, as long as I did not use flash.