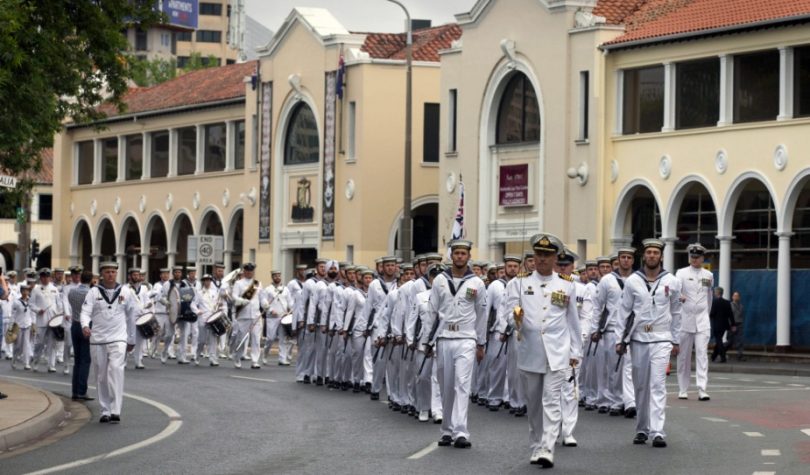 Ship’s company of HMAS Canberra (III) exercise their right to freedom of entry to the city of Canberra in November 2015. Photo: Royal Australian Navy.

Festival-goers are being warned to expect delays on their way to Spilt Milk with road closures affecting parts of the city as officers and crew from the HMAS Canberra march down to Civic Square.

Periodic road closures between 9:00 am and midday on Saturday morning will be in place as the march travels from Akuna Street, along Bunda Street, on Northbourne Avenue and then onto London Circuit.

Royal Australian Navy Officers will then challenge the ACT Chief Police Officer, Ray Johnson, to exercise their freedom of entry to Canberra.

According to the Navy, “freedom of entry is the most honourable distinction a city may bestow on a contingent of the Australian Defence Force and is celebrated with a ceremonial parade through the city streets”.

The parade will then continue along London Circuit, turning left into Akuna Street and conclude, the Police say.

opso - 2 hours ago
As per the first couple of sentences of this story 'From midday today, ACT residents can travel for any reason to an expanded... View
Sam Oak - 2 hours ago
There is no reason for being pedantic with the rules. Ironically as NSW reopened the cases have plummeted showing that Austra... View
JC - 3 hours ago
Yes you have missed something. It is now both directions. The quote below is from the first web page you fine if you google A... View
Property 16

TimboinOz - 2 hours ago
hi Jimmy, Is Steve B. still around?... View
bj_ACT - 8 hours ago
I prefer the televised Canberra Sitcom “Parliament House”. Some of the characters are unbelievable. That Barnaby Joyce ha... View
Business 1

bj_ACT - 4 hours ago
I’ve always liked how Meninga actually speaks positively about Canberra. I heard him on Brisbane radio one day standing up... View
News 44

Capital Retro - 4 hours ago
What about the existing multi-mode electricity generating Liddell Power Station and the purpose build (for cooling) Lake Lidd... View
chewy14 - 5 hours ago
Nobody, That isn't an answer. Although it's obvious why you can't properly answer the question. For right or wrong there is n... View
nobody - 7 hours ago
Chewy14, all 45 countries who have-are-will operate nuclear power has faced that question, and each has managed to find their... View
News 3

Erica Burford - 18 hours ago
I think the problem is, the NSW Government doesn't have a "register of significant indigenous culture sites" they can be decl... View
News 46

@The_RiotACT @The_RiotACT
Melany Batley's quaint Italian-style #gelato carts have been popping up at weddings, birthday parties, and other special events across the region since 2019. Here's how she got her start https://t.co/L9Ghkk36dG (36 minutes ago)

@The_RiotACT @The_RiotACT
At 43, @BrumbiesRugby front rower Louise Burrows may be twice the age of some of her #Brumbies teammates, but she's still at the top of her game and is determined to be selected for next year's Women's #Rugby World Cup https://t.co/cjDGzSy61w (3 hours ago)