NCA wants your feedback on parking in the zone, and drops a steamer on the internet. 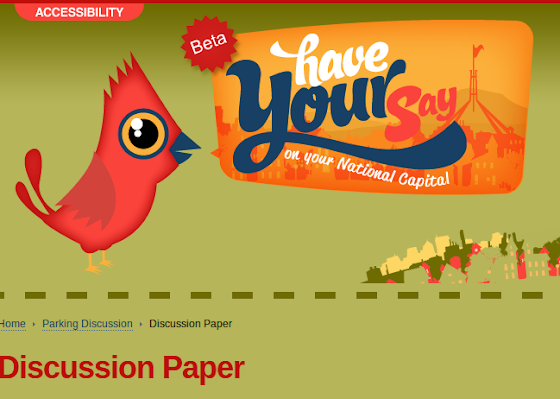 The National Capital Authority is calling for submissions on their terminally retarded discussion / chat / forum / vibe of the thing waste of good electrons.

(Obviously this process is not being taken seriously)

At issue is the ever so serious question of parking arrangements in the Parliamentary Zone.

Parking management options in the discussion paper include:

A parking audit, included in the discussion paper, found there is an undersupply of publicly available spaces in Russell, Barton and the Parliamentary Zone.

You have until 17 December to overcome the horror of the “discussion paper”/website and try to make a sensible contribution.

I mean FFS we’re talking about the living arrangements of tens of thousands of people, not to mention public access to national institutions, and they give us talking animals???

If you think I’m over-reacting then what is this thing at the bottom of the page? 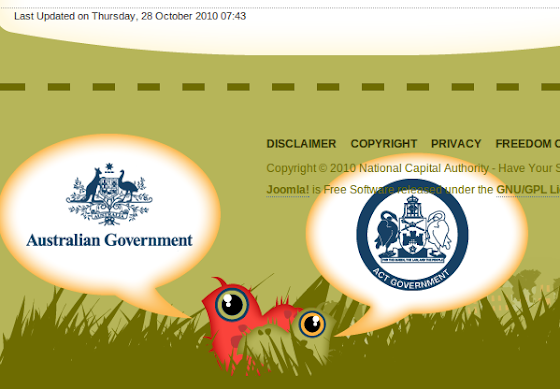 Some sort of owl trapped in undergrowth speaking in pictograms on behalf of the Australian and ACT Governments?

What sort of submissions are they hoping to get from the teletubbie audience?

UPDATE: No Wait!! It’s TWO TALKING SLUGS SAYING THEIR NAMES VIA PICTOGRAMS! THAT’S SO MUCH BETTER.

Tags NCA parking parliamentary zone the horror of the interweb

14 Responses to NCA wants your feedback on parking in the zone, and drops a steamer on the internet.
Filter
Showing only Website comments

I think the advertising looks cool but are they asking where they should install play equipment for my kids?

Free parking!! This consultation process is only in place so when they make bad decisions they can blame us!!!

Lets do a survey of public servants who get free parking:

free: those in the parliamentary triangle. And at Brindy park

not free: all the rest who work in departments that arent in the parliamentary triangle (Civic, Belco, Woden) (actually, does Centrelink have free parking?)

Anyway, a good proportion of public servants already pay for parking and get no compensation for it. And the rest of us subsidise it (even if only through the loss of revenue to ACTION)

Can we have 3 for free please?

If it were just plain text would you interpret that as an indication that feedback would be taken seriously? Not sure I’d make that same logical connection.

Looks like the NCA (which should stop wasting taxpayers’ money though existing) did not get word that Rudd is gone and that there are not supposed to be any pointless feel good consultation/blog/poll happenings anymore.

I also like how anyone can post anything and it immediately goes straight online on a government website with no moderation at all. Not even The-Riotact is that dumb.

I don’t understand the sudden consultation here. Did every other paid parking area in Canberra go through a consultation process? Just make it paid parking already and create a system of reserved parking for our national institutions. Don’t really care if a few public service staff cry about it. I’ve probably missed something here or is it really that simple a problem?

I am frightened of Cyclops Star. 🙁

The poll asking ‘Would increased frequency of bus services to Barton, Russell and the Parliamentary Zone (Parkes) make you less likely to drive a car to these areas?’ is also worth doing – once you make your choice you’re shown the current results which are currently ‘yes’ – 32% and ‘no’ – 28%. The other 40% of results are from a survey with only two options seem to have gone missing… This is all yet another good reason to get rid of the NCA.

Why is it still “Beta”? Does this mean that it is going to get better, or that the work experience kid who put it together is back at school now?

Consultation, consultation, consultation…. You can’t convince me it’s anything more than a psychological operation designed to bamboozle anyone that actually wants to comment on anything the combined ineptitude of the ACT Government and National Capital Authority deems worthy of inflicting on the subservient drones of Canberra.

How about consultation alone these lines:

You going to get hit for $2,000 per year to park your car. By the way, your SES officer manager (with their salary sacrificed car) probably won’t get hit.

I worked somewhere once with chronic parking shortages. The managers at EL2 and above met to discuss and their solution was to allocate reserved parking spaces for themselves. Ordinary staff had to park sprawled all over the place. The public complained then it was made no parking outside with the nearest parking lot about 1KM away.

Senior managers with the power to address parking problems simply don’t care because they have cushy reserved parking. No wonder the parking facilities are usually poor for ordinary workers in areas like the Parliamentary triangle and Barton.

How about consultation alone these lines:

You going to get hit for $2,000 per year to park your car. By the way, your SES officer manager (with their salary sacrificed car) probably won’t get hit.

This is clearly an epic win by a sarcastic designer who was horrified at being asked to create a mascot for a discussion paper at vast expense to the public.

I’m all for government websites with a little bit of personality, but I’m guessing that site fails a pile of accessibility requirements – I mean the entire first paragraph of the main Have Your Say page is text as a background graphic!

And their privacy notice doesn’t seem to mention handling of user account info… nor does it specify the privacy implications of using Google Analytics…and I’m going to stop looking now because I could be here forever.

Merely a reflection of the bug-eyed creatures who inhabit the good offices of the NCA.

Neil Chandler - 19 minutes ago
I would have thought that whatever "heritage" the area had, both european and indigenous would have been pretty much devastat... View
Stuart Roesler - 4 hours ago
The area is wasted. No one uses it currently and it is pretty rubbish as far as parks go. Build it up and make use of the wat... View
Juliet Jackman - 7 hours ago
Ok I've read it now. I feel they are clutching at straws to be honest considering we are talking about an area of carpark foo... View
Community 131

Kaye Hainsworth - 53 minutes ago
Please don't cut those trees,they are absolutely beautiful, colour full on the side of it its awesome when people driving pas... View
Pam Dick - 6 hours ago
These popular trees represent a soldier killed in the ww1.The were planted by the by the town's population to honour them. Le... View
Ross Hamilton - 6 hours ago
Man would I love to get my hands on some of that wood View
Opinion 6

Chris Johnstone - 1 hour ago
Yep things have changed for me......no way I’m going back the way it was View
Belinda Spouncer - 7 hours ago
Staff should be allowed to work from home at least one day of week its a win win for both the employee and employer. If nothi... View
Anne Atherton - 13 hours ago
For me it's not about working less but about working differently. I enjoy working from home and the flexibility it gives me.... View
Sport 30

Nikos Manikas - 8 hours ago
Dianne Latimer if Brisbane get a 2nd team then all Ch9 will do is alternate between the 2 Brisbane teams. just like now they... View
Food & Wine 128

Emma Jelbart - 10 hours ago
Meagan Kopatz I'm in Fraser and heard something like about the time you would have heard that bang (or boom?) in Kaleen. Agre... View
Opinion 37

Christopher Cuba Rabanal - 11 hours ago
We don’t put a price on people’s lives. This is the teachings of our great society and Nation. So let’s not start now. View
Carl Ostermann - 14 hours ago
Considering the fact that the ACT is surrounded by NSW and the border has to be open for surrounding towns, it is in our best... View
Amy Willmott - 16 hours ago
Nick Anderson Couldn’t agree with you more.... View
News 72

Annette Mckay - 15 hours ago
That's a shame Target has much better quality than Kmart. I don't shop in Kmart much because of the quality don't know where... View
News 5

John Moulis - 17 hours ago
Not much of a choice is it? A woman from Labor and a woman from the Liberals. And to think that people could have had the cha... View
show more show less
*Results are based on activity within last 7 days

The longstanding saga of Braidwood’s historic highway entry lined with golden and Lombardy poplar trees is progressing to the next...
News 72

A David and Goliath struggle between a YMCA childcare centre and developers has been resurrected by a new development application...
News 0

A man has died after a suspected drowning at Batemans Bay on the state’s south coast. Emergency services were called...
*Results are based on activity within last 7 days

Mystery surrounds a loud bang heard early this morning in Belconnen and Gungahlin but it's not the first to be...
Community 131

@The_RiotACT @The_RiotACT
With more local businesses turning to home delivery each week, one of the latest is a big name in fruit & veg, Ziggys Fresh https://t.co/CbJxNYEY3y (11 hours ago)

@The_RiotACT @The_RiotACT
There's continued dissension at the top in Capital Football as an immediate past Board member says the organisation's behaviour has jeopardised a return to competition this year https://t.co/VC6ze6NRAL (12 hours ago)