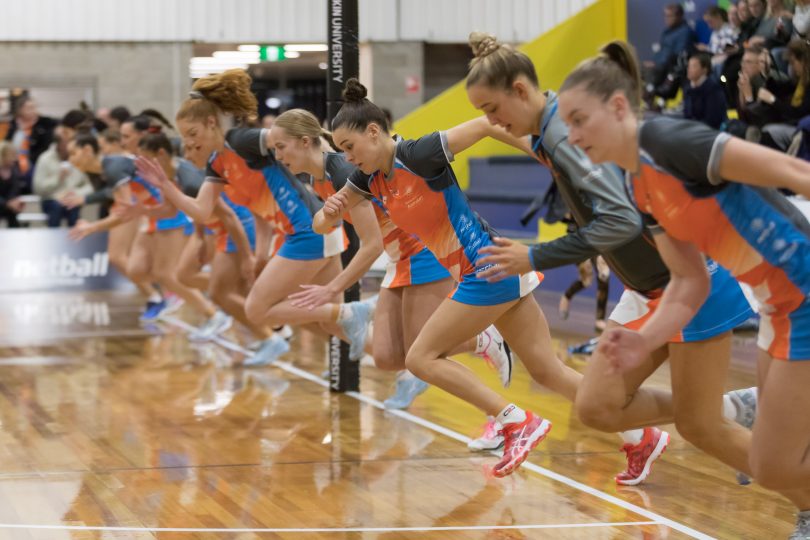 The Canberra Giants warm-up for their game against the Tasmanian Magpies in May this year. Photo: Supplied.

Following Netball ACT’s successful bid to field a team in the NSW Premier League competition, an ACT-based franchise will now take to the courts in next year’s Australian Netball League (ANL).

Netball ACT has confirmed they will pursue an independent franchise and have effectively disbanded their joint venture partnership with the Canberra Giants, who play in the Suncorp Super Netball competition.

However, acting general manager for Netball ACT Nicole Bowles said they will maintain a strong connection to Giants Netball with the continued delivery of Suncorp Super Netball games in Canberra.

“We have enjoyed our time working with Netball NSW and Giants Netball across the past three years around the Canberra Giants program,” Ms Bowles said.

“We are also hopeful that the ANL schedule will include additional games here in Canberra as we have strong community support in the ACT, as we saw with the Giants v Firebirds sell-out and crowd record.”

The Australian Netball League is Netball Australia’s feeder competition into Suncorp Super Netball, so the move to have an ACT-based side will further assist with the sport’s rapid growth in the capital.

“This will be a significant turning point for netball in the ACT,” Ms Bowles said. “We are taking a strong step forward in 2020 to offer opportunities for athletes based in Canberra to compete at both the Premier League and ANL levels.”

The announcement also builds on Netball ACT’s elite athlete program and heralds a new era of performance for the sport in the ACT, something Netball ACT President Louise Bilston is eager to watch unfold.

“We see this endeavour into sole-ownership of an Australian Netball League franchise as highlighting the depth of talent in our region,” Ms Bilston said.

“It also shows the commitment of our members and our community to our sport, and the strength of netball as the number one female participation sport. This is an exciting time to be a part of the future that Netball ACT is building.

“We have been focused on growing our capacity, developing opportunities and driving our business to be ready for this next step forward. The timing is right and we are seizing the opportunity that comes before us,” Ms Bilston said.

The newest ACT-based netball team has yet to be named. Further information on Netball ACT’s plans for their ANL and Premier League teams will be provided in the coming weeks.

Would be great to see a Canberra Super Netball Team.