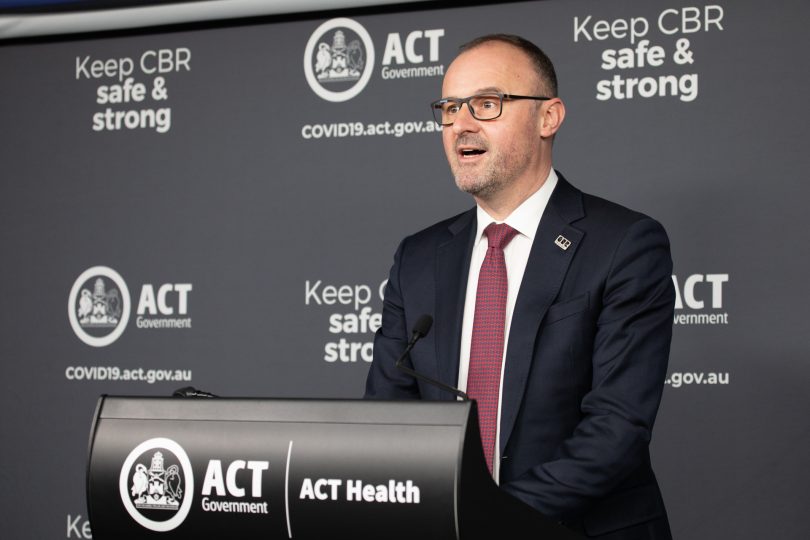 The ACT has reported 1123 new COVID-19 cases in the latest reporting period to 8 pm last night.

It’s a slight drop from yesterday’s 1311 new cases, but daily caseloads over the past week have been steadily increasing. Health authorities previously said they expected to see daily caseloads stabilise around 800 thanks to the spread of the BA.2 sub-lineage of Omicron.

Despite this increase in cases, hospitalisations remain steady, which health authorities say is a good sign. There are currently 37 people in the ACT’s hospitals, including four in ICU and one being ventilated.

According to ACT Health’s weekly epidemiological report – which covered the week 7 to 13 March – the BA.2 sub-lineage of Omicron is becoming more dominant. It was found in more than half (56 per cent) of all sequenced samples.

Earlier this week, Chief Minister Andrew Barr urged people to worry less about daily caseloads and focus instead on other metrics such as hospitalisations.

“I’m principally focused on those numbers rather than on daily caseloads.”

However, Mr Barr conceded that while there is a lag between daily cases increasing and hospital numbers increasing, hospitalisations had remained within what had been modelled by ACT Health.

Currently, the double-dose vaccination rate for the ACT’s five-plus population is 95.5 per cent, and 71.2 per cent of residents aged 16 and older have received a booster.

Of ACT residents aged five to 11, 27 per cent had received two doses.

Mr Barr has also used yesterday’s Australian Bureau of Statistics (ABS) Labour Force data to illustrate that the Territory’s post-COVID economic recovery is continuing, despite an increase in cases.

The ACT has the lowest unemployment rate in the country at 3 per cent, which is 0.2 percentage points lower than in January 2022.

“This recovery is helping to create local jobs as we absorb the longer term and cumulative impacts of COVID-19,” Mr Barr said.

“Recent strong retail trade figures and strong credit card spending data, as well as an increase in the household savings rate, which will support greater private consumption, continue to give reason to be cautiously optimistic about the year ahead.”

There are now 1060 people in hospital with the virus and 32 people in ICUs around the state.

Victoria has reported nine deaths overnight and an additional 9036 cases of COVID-19.

There are now 199 people hospitalised with the virus, while 23 patients are in the state’s intensive care units.

“Earlier this week, Chief Minister Andrew Barr urged people to worry less about daily caseloads and focus instead on other metrics such as hospitalisations.”

Is this the same Andrew Barr who used to deliver somber caseload announcements at daily press conferences just a few months ago? Back when Canberrans would have heart palpitations if the number went from 50 to 80.

Unfortunately for AB, the media is now addicted to caseload numbers and will complain bitterly if he doesn’t deliver them. Just look at the headline of this article. “37 people in hospital” doesn’t quite have the same ring to it.

Wait until they convert to “negative patient outcomes”.

The 1970s are back. High inflation thanks to government’s actions over the past two years.

“High inflation thanks to government’s actions over the past two years”
I’m sorry, but I think you missed the news?
Inflation is occuring around the world due to international supply chain issues, as a result of a world-wide pandemic and in more recent times
the Russian invasion of Ukraine and the subsequent petrol prices crisis.

Ah, the “news”… Somehow they neglected to inform you that Australia increased its money supply by 25% or so the last 2 years. Did you really think government could print money like that without causing major inflation?

But sure, it’s Ukraine, supply chains, petrol prices… Because the news said so.

I mean we don’t want to end up like the local government at Gosford, do we?

Gosford may have a few things we could find out about down the track..

“paid parking at beaches” may be considered too.

The population of the Central Coast Council area is about 345,000. Population growth appears to be stagnating.

Um, isn’t that the same situation in Canberra?