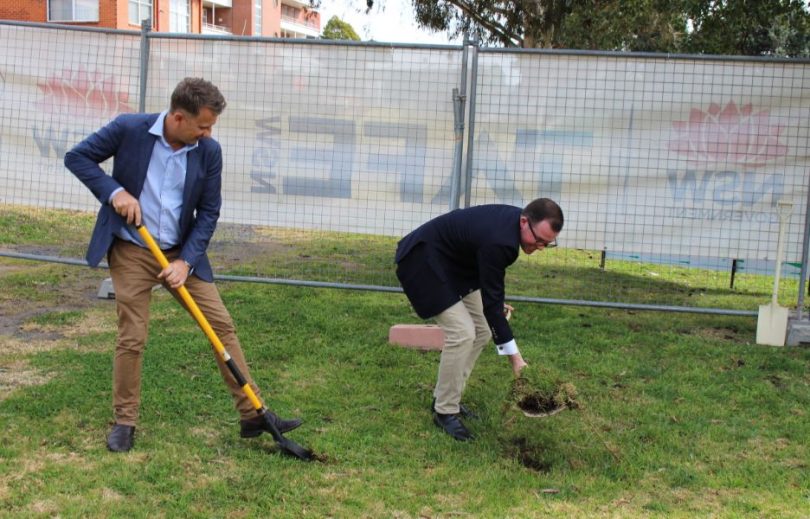 Bega’s new $7 million TAFE campus will be ready for students in February 2019.

Member for Bega Andrew Constance and the Minister responsible for TAFE NSW Adam Marshall have turned the first sod on the new Auckland Street site in the shadow of the old Bega Hospital.

For the time being, this state-of-the-art Connected Learning Centre will work in conjunction with the existing Bega TAFE campus on Barrack Street.

“This truly delivers an education precinct in the heart of Bega, between the University of Wollongong, our agricultural high school, and now TAFE – all next to each other. This will lead to synergies and opportunities that standing here today, we can’t predict,” Mr Constance says.

“Students at this new digitally-powered facility will be able to connect into TAFE NSW’s state-wide network of campuses and courses, empowering them with more choice when it comes to launching their career.

“World-class learning facilities and a broader range of courses without being forced to travel long distances to places like Cooma, Moruya or Nowra,” Mr Constance says. The site for stage one of Bega’s new TAFE campus on Auckland Street, in the grounds of the old hospital. Photo: Ian Campbell.

As the Assistant Minister for Skills, Mr Marshall says the new campus represents the future of learning in NSW.

“This is one of 13 Connected Learning Centres that TAFE is constructing across regional NSW, we opened the first four late last year and early this year,” he says.

“Three additional Connected Learning Centres have just been completed – Corowa, Deniliquin, and Narrandera. Bega will be the next one in the state.”

Mr Marshall says the first four centres are offering double the number of courses which has resulted in a 30% increase in student numbers.

“In the past, if there were only one or two students that wanted to study a particular course it probably wouldn’t have been offered here,” he says.

“It gives students the opportunity to study a course in Bega that might not have been able to be offered before,” he says.

Posted by About Regional on Thursday, August 2, 2018

“Hospitality, for instance, will remain down there [Barrack Street] given the facility that is up and running,” Mr Constance says.

Construction starts this week and will be finished in February ready for students.

Adjoining land on the corner of Auckland Street and McKee Drive has been earmarked for an as yet unfunded second stage. Mr Marshall says that project might see facilities currently at Barrack Street move.

“That is yet to be determined, we just need to wait and see how we go.” Construction starts this week and will be finished by February 2019. Photo: Ian Campbell.

As for the future of the old Bega District Hospital next door, Mr Constance says NSW Health is still working through options.

“There is master planning that is happening on site in conjunction with Bega Valley Shire Council, ultimately the Health Minister is going to have to dip into to the budget to clean up the site, that’s all being worked through separately.”

“TAFE has come in and taken first dips on the vision of this being an education precinct right through the heart of Bega,” Mr Constance says.

Dee Kaden - 2 minutes ago
That could almost be 5,400 homeless off the streets!!! View
Slim Hunter - 2 hours ago
Natives or weeds that require watering?🤔 View
Jim Andrews - 4 hours ago
Nathan Burraston With respect my friend, you dont know what you are talking about. First up you cant just plant a tree anywhe... View
Lifestyle 24

Jim Webb - 6 minutes ago
Looking forward when it reopens. 2019 image View
Di Green - 52 minutes ago
I so enjoy these gardens View
Vee Bee - 4 hours ago
We miss it so much :( View
Community 32

Chris Davis - 8 minutes ago
Hope they check out how Narooma runs it View
Steph Hamleed - 22 minutes ago
Melanie Leedham bring the kids to this View
Acton - 56 minutes ago
In 1992, a shipping container of 28,000 rubber ducks fell overboard on its way from Hong Kong to the United States. Carried b... View
News 17

Sam Oak - 21 minutes ago
Wrong, even with no restrictions the death toll from covid would still be less than the flu. That’s because people naturall... View
MERC600 - 46 minutes ago
Well had a quick look at this, a heap of possible dates and possible openings and possible closings ( if it goes backwards ).... View
Capital Retro - 1 hour ago
Facts have nothing to do with politics. View
Opinion 45

@The_RiotACT @The_RiotACT
Got an incredible idea for a #startup that will change the world? The @CBR_IN and @MeyerVandenberg say getting legal advice early can save you a whole lot of pain down the track https://t.co/P9C9WvzEpN (27 minutes ago)