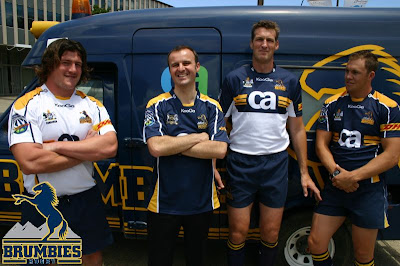 With a cold wind blowing through the world of corporate finance the Brumbies have decided they are, once again, proudly a Canberra team as they return to the warm soft embrace of a Government town.

From their media release:

CA Brumbies Stephen Hoiles, Justin Harrison and Guy Shepherdson, and ACT Sports Minister Andrew Barr were present to model the new-look ‘home’, ‘away’ and ‘heritage’ KooGA jerseys that feature the word ‘Canberra’ under the ACT Coat of Arms, a reference to the national capital’s centenary anniversary in 2013. The reference will remain on the jersey across the next four Super Rugby seasons.

No, I have put forward an argument based upon some facts, regarding a small interest group gaining financial advantage by the simultaneous transfer and loss of a public asset.

You, however, have resorted to abuse and exaggeration to avoid answering the point.

I’m not anti sport or anti – rugby, I go to the AFL when it’s in town, the Brumbies and the Raiders but that doesn’t mean that this sort of give away suddenly becomes OK.

Let’s have some decent leadership from the ACT Government on planning in general and on this issue specifically.

ie – work with Brumbies management to find a location that suits training and playing needs without carving up public parks, fencing them off and building units on them.

Population density in the Inner South has already increased substantially over the last 10 – 15 years, as quantities of units and townhouses with little or no outdoor space at all have been built where individual houses once occupied large blocks.

So if anything, there is an even GREATER NEED to KEEP PUBLIC RECREATION AREAS for the increased population in this zone.

…you tell me, why should any individual interest group which is basically a business benefit by the handover of a valuable piece of land which is a community asset ????

…why should this public land be lost from the community at all ????

And while we’re at it, how about someone from the BRUMBIES get out there and tell us why they think this loss represents a good deal for the residents and ratepayers of the ACT ?

What other options have you looked at ?????

Is it because land in the INNER SOUTH is just too juicy to resist ????????

No, this sort of whinging about one patch in a sea of green spaces is what makes Canberra look like a joke.

…….suddenly the Brumbies come over all patriotic about Canberra ????

Could it be that they want the ACT RATEPAYERS to get that nice distracting warm inner glow while they attempt to convince everyone that it is a good idea to REZONE a valuable PUBLIC ASSET into a PRIVATE DEVELOPMENT OPPORTUNITY for the Brumbies ????

ie GRIFFITH OVALS and PARK complex – public property, public asset, freely accessible for all, looks set to become a private training ground and unit development opportunity for the Brumbies, with the ACT Government “assisting” by rezoning the land to suit.

Given that the Brumbies have already cost the public purse substantially is there any GOOD reason why our government should allow this to happen ??? Just ONE ? Nope ?

This club should pay it’s own way rather than skimming off public assets to prosper and the Government should be PROTECTING public assets, not handing them out for the benefit of a minority.

Do we see New York City carving up Central Park, London developing Hyde Park, or Paris selling off the Jardin des Tuileries ???? Nope. These are large parks in large cities which have significantly greater pressures on land availability.

This sort of “PLANNING” from the ACT Govt. makes Canberra look like a joke.

Finally the Brumbies have come back to Canberra, and I never could understand why the supporter jersey was always a bit different from the players jersey.

Supperters jersey’s aren’t allowed to carry Coat of Arms either the ACT or Australia for that matter. Only those picked to play for that team can actually wear the Coat of Arms.

Good to see that they’ve given the players a close season job flogging shirts out of the back of the Brumbies van.

when is Guy going to get a decent haircut?

Che, thanks for saying what the general populace was thinking! Let’s start a collection for Shep to visit the barbers LOL. I think I prefer his hair when it looked like it was done by a hairdresser with an attitude problem and a belt sander……

when is Guy going to get a decent haircut?

I’m with Funk in wondering just how much extra this has cost us. Unfortunately, this govt is far from open and accountable when it comes to declaring our taxpayer largesse to various interest groups.

> Does it really matter if they have ‘Canberra’ or ‘ACT’ officially in the title?

Given that with the arrival of “The ACT Brumbies” as they originally were, we lost the previous ACT representative team….then yes, it really does matter.

Still…I’m over it. I’m simply looking forward to them having a good year with the great squad they’ve put together.

Yes, because its our ACT money that is supporting them and most of the fans are here in the ACT. If it doesn’t matter, then why did they drop it in the first place?

Good to see that Andrew Barr was there. But then again, he would turn up to the opening of a paper bag.

I think people need to quit being so precious in regards to a professional sports team.

The Brumbies not only represent Canberra and the ACT but also southern NSW. They also try to market themselves to other areas in the country.

Over the years they’ve still retained the ACT coat of arms on their jersey. No other Australian team does this.

Does it really matter if they have ‘Canberra’ or ‘ACT’ officially in the title?

Good to see that we actually get something for the dollars we (as ACT taxpayers) have poured onto the team. Or did we have to pay extra for this privilege.

Wow, how big of them to put the name of their host city on their jersey. I agree with wishuwell. What a cop out.

To say they are, once again,proudly a Canberra team might mean something if they actually called themselves the ‘Canberra Brumbies’ or the ‘ACT Brumbies’. I see it only for what it is, sleeve sponsorship same as any other product or business arrangement.

Don’t like the change to the ‘heritage’ strip. No idea why they felt the need to move the sponsor’s logo so far up…

Finally the Brumbies have come back to Canberra, and I never could understand why the supporter jersey was always a bit different from the players jersey.