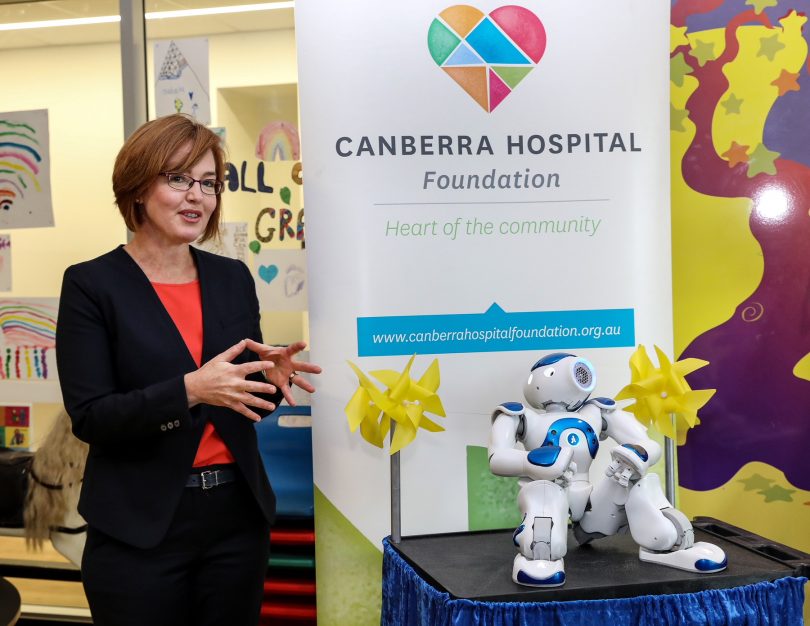 Say hello to MEDiZen, your sick child’s new best friend at the Centenary Hospital for Women and Children, but it’s no toy.

The first NAO humanoid robot with MEDi applications in a paediatric ward in Australia, MEDiZen will help its youngest patients return to full health by calming and distracting them during medical procedures.

The robot, which runs on the Medicine and Engineering Designing Intelligence (MEDi) software, was developed and tested at Alberta Children’s Hospital in Canada over a three-year period, where it was found to significantly improve the hospital experience for young patients by reducing their stress.

Dr Tanya Beran, a professor of community health science at the University of Calgary, got the idea for MEDi after working in hospitals where children scream at the thought of getting a needle.

“I thought that maybe they would respond to a child-friendly robot to help them face medical procedures,” she told NBC.

MEDi started with flu vaccines and blood tests, then expanded to include IV and catheter removal and brain-activity tests. It could even be programmed with a child’s favourite story.

Minister for Health and Wellbeing Meegan Fitzharris said coming into hospital, particularly for young patients and their families, could be quite a daunting experience.

“We are very fortunate that the Centenary Hospital for Women and Children is the first paediatric ward in Australia to have a humanoid robot with these specialised applications designed to lift children’s spirits, provide a distraction and talk them through procedures,” she said.

“Providing clinical care to a child who is calm and more focused on the robot, rather than the medical procedure is less stressful for all.”

Ms Fitzharris said the testing period had shown the MEDi robot changed the outlook of children on their hospital stays.

“Children who have had interaction with ‘MEDiZen’ usually leave the hospital setting chatting about the robot, rather than the procedure or appointment they may have had,” Ms Fitzharris said.

“Through this innovative new approach provided by ‘MEDiZen’, we want our youngest patients to have the most positive experience they can under difficult circumstances.”

The $25,000 purchase of the MEDi robot was made possible through a generous donation from the EVT (Event Hospitality and Entertainment) Charity Committee to the Canberra Hospital Foundation.

A_Cog - 3 hours ago
Should the ACT get its own police force? NO! It'd be run just as badly as every other ACT Govt service. Instead of buying ser... View
News 18

wildturkeycanoe - 4 hours ago
I'm still waiting for surgery, almost up to my "expected" 365 days on the Category 3 list. This is after initially waiting fo... View
HiddenDragon - 7 hours ago
This year's Annual Rates Assessment Notices tell ratepayers that 31% of rates payments go towards funding the health system -... View
Opinion 110

chewy14 - 5 hours ago
Russianafroman, I go from being called a right wing nut job to a Socialist Comrade in the space of a few stories these days.... View
russianafroman - 8 hours ago
Capital Retro I don't watch or listen to the ABC. But it wouldn't surprise me. View
Jose Black - 1 day ago
The ACT Greens have a major policy on supporting the community sector (including youth and mental health services) and giving... View
ACT Election 114

Reno Minopoli - 7 hours ago
Clinton Berry which part of "Three decades’ population growth "needed" do you not understand? Kids that grow up replace tho... View
Capital Retro - 7 hours ago
Well, I can't speak for everyone but I have certainly always "paid my own way". In the early days of SMSFs the deductibility... View
ssek - 8 hours ago
The greens and pretty good economic plan are an oxymoron. View
Property 1

Capital Retro - 8 hours ago
Coffs Harbour has The Big Banana, Tamworth has The Big Guitar, Canberra will have The Big Battery. View
News 47

Sarah Fox - 17 hours ago
Zalan Filip we will have to check it out! View
Zalan Filip - 1 day ago
Sarah Fox the one Soph was going on about... reminds me a bit of the huge market thing in Castlemaine. View
Angela Doyle - 1 day ago
Jacinta Elliott yes please! View
Property 35

@The_RiotACT @The_RiotACT
It’s a great week for live music with CBR’s jazz musicians stepping up as shows become increasingly sit-down affairs. Our #GigGuide has all the details https://t.co/LYnIt6PXE5 (3 hours ago)

@The_RiotACT @The_RiotACT
The Boat House is taking its offerings to the next level with the addition of an outdoor bar right on the shores of the lake https://t.co/rHkzcdz3kG (4 hours ago)

@The_RiotACT @The_RiotACT
The Justice and Community Safety Committee has recommended the ACT trial its own independent police force, increasing oversight and accountability. Is it time the ACT took control of its own policing? https://t.co/mjqHZuLQgf (7 hours ago)