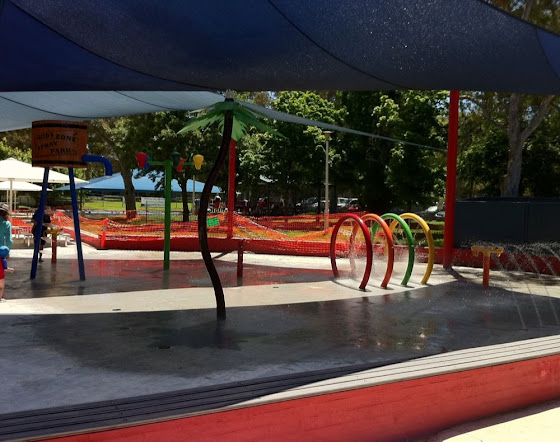 “Dickson Pool has developed a reputation as being a family pool and is favoured by families with younger children,” said Director, Sport and Recreation Services, Shane O’Leary.

“This new $430,000 children’s water play area will further enhance the pool. It features a range of interactive features including ‘tipping buckets’ and a spray tunnel.

Very importantly the release notes that the water system for the children’s facility is discrete from the rest of the system.

But curiously there appears to have not been any members of the Legislative Assembly wanting to take credit.

Are they ill? Or already departed for summer? 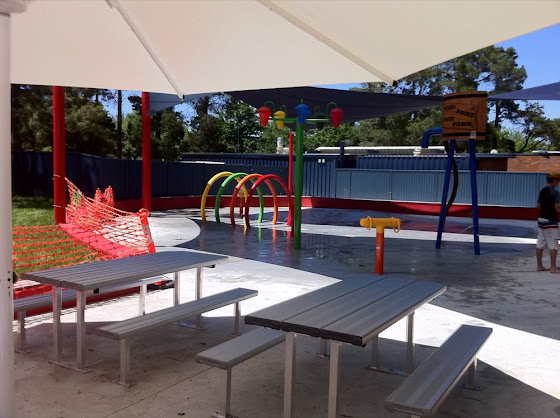 BTW if you want a water play park – this is how you do it:

Not only is it an awesome playground with great flying foxes and climbing equipment the water play area is lots of fun and sprays jets and has running streams in it.

BTW whats happening with Weston Park – last time I contacted TAMS they said it was all due to be sorted out last year but when we were there last there didn’t appear to be any water play facilities just some crappy play equipment.

I’m sorry but it seems a huge waste of money to put a kid’s water play area at a pool – there is already water facilities there which will keep the kids cool. Why not stick it in a park which isn’t near a public pool. That’s the dopiest thing I have ever seen.

Me, too. Planning great swathes of time at Dickson pool over the Christmas holidays. Will hopefully avoid homocide in my domicile by keeping children thus entertained.

nearly half a million for a shallow pool, a sail and a few pumps? how does one get a contract for this??

Depressingly, this sounds about par for the course (I work in the property field) – maybe we should both go into contracting…

nearly half a million for a shallow pool, a sail and a few pumps? how does one get a contract for this??

Jason Hutty - 3 hours ago
Tim Van Der Vlist I'm not sure if you understand the economics of a member's club. The members own it. So yes, of course they... View
John Sands - 5 hours ago
John Ryan Steve Boege just means you should go to 19th hole and think about how you would have played... View
Fiona Wright - 5 hours ago
Irene Kelly greenkeepers made a mistake on the greens (in the article).. View
Property 22

nealg - 11 hours ago
Heavy truck traffic, lack of footpaths and e-scooters not a good mix for Mitchell. View
show more show less
*Results are based on activity within last 7 days

Ducks move on as pools set to reopen

Lifestyle sanctuary on the capital’s doorstep

@The_RiotACT @The_RiotACT
There's a big week ahead in #Canberra with markets, music and comedy - there's something to please everyone https://t.co/wy6n8HbUv0 (6 hours ago)

@The_RiotACT @The_RiotACT
A new Auditor-General report has found teacher performance could not be adequately assessed as performance management has not been "implemented effectively" https://t.co/eyqWf1Q0IN (8 hours ago)