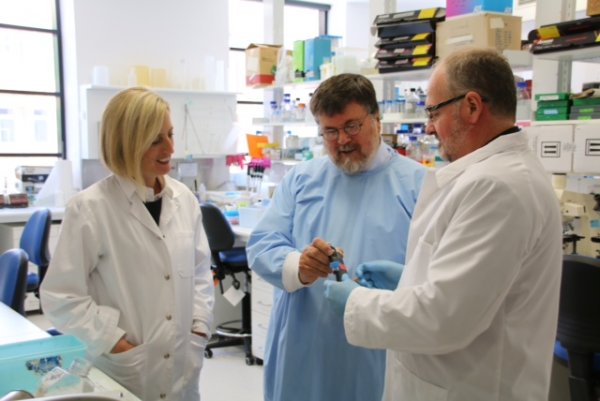 Chief Minister and Minister for Health, Katy Gallagher, today announced the appointment of Professor Ross Hannan as the first Centenary Chair of Cancer Research at the John Curtin School of Medical Research.

As Chair, Professor Hannan will oversee a collaborative hub for cancer research that will involve leading researchers from within the Australian National University, as well as clinicians from the Canberra Region Cancer Centre.

“The burden of cancer within the Australian population is significant. Approximately one in two men and one in three women will be diagnosed with a form of cancer by the age of 85. Within the ACT, data has shown that in 2009 there were 1380 new cases of cancer being diagnosed each year,” the Chief Minister said.

“This appointment satisfies another election commitment when the government promised $20 million to boost cancer services in the ACT, and I’m pleased that the government is continuing to meet this commitment with $14.7million funded in the 2013-14 and 2014-15 budgets.”

The most common types of cancers in Australia are prostate, bowel, breast, melanoma and lung cancer, and these five types combined accounted for over 60% of all cancers diagnosed.

“Canberra already has world leading research capabilities at ANU, UC, NICTA and the CSIRO and a collaborative cancer research hub would be well-placed in the nation’s capital to build on our reputation as a smart city.

“I congratulate Professor Hannan on his appointment and welcome him to the ACT as the inaugural Centenary Chair of Cancer Research.”

In addition to this, the Chief Minister also announced the formalisation of the Synergy in Canberra for Health (SynCH) partnership, which was established with the aim of encouraging new collaborations in health and medical research to improve health outcomes for the ACT community.

The SynCH partnership is between four institutions: The Australian National University, the University of Canberra, ACT Health, and ACT Medicare Local. The partnership will focus on primary care, acute care, and preventative population health.

“SynCH harnesses existing health networks within the ACT to allow academics and clinical staff to work in close proximity to each other. The SynCH partnership offers flexibility and the ability to assemble multi-disciplinary teams to address emerging problems and opportunities,” the Chief Minister said.

“I’m confident that these new partnerships along with the appointment of Professor Hannan will greatly enhance health research in the capital, and I welcome these types of collaborations to provide the latest data and an evidence base for improving treatment outcomes for our patients in the future,” the Chief Minister concluded.

Good on you Katy Gallagher

Tom Adam - 2 hours ago
Why won’t they make it multi storey, instead of stealing parklands?? Not a wise investment.... View
Steve Herczeg - 6 hours ago
I've always wondered why there's a statue to celebrate single mothers at the top of the street. View
Bill Gemmell - 7 hours ago
Ashley Wright no worries. It is a morass to wade through. You made me look again as well. The definition of temporary is the... View
Motoring 14

John Brinsmead - 10 hours ago
wonder when we'll see a da for an 8 to 20 story building. View
Theresa Rand - 16 hours ago
Very sorry to read this article... my husband and I do not live in Weston but would make a trip to Weston to visit the booksh... View
Josh Devenny - 18 hours ago
Ada oh noooo 😪😪😪😪😪 View
News 12

@The_RiotACT @The_RiotACT
ACT power bills are on the way down, thanks to the growth in renewable energy driving down the price of wholesale electricity. See what you will save https://t.co/5eDsZoeTpM (4 hours ago)