The ACT Rural Fire Service (RFS) experienced a 10-fold increase in its waiting list in the wake of the Black Summer fires, and an extra 22 recruits have just completed their training and are ready for the frontline ahead of the upcoming season.

For new recruit Jaimie Vincent, who first applied almost 18 months ago, volunteering was all about giving back to her community.

“I had spent some time working with the Tidbinbilla brigade on some cultural artwork they had put on their heavy tanker and I got to know the brigade out there and spend some time with them,” she said.

“I am from a very community-focused family. I am raising two small children and I want to be a good role model for them to support and contribute to the people that live around you in any way you can.

“We all want somebody to step up and help us in a time of need so if I can be that for somebody else then that is enough driving force for me to support somebody who needs help.”

As an Indigenous woman, Jaimie said that she was inspired by hearing about the brigade’s approach to firefighting and their appreciation for the Brindabellas.

“They have a really good connection to the land and country out there,” she said. 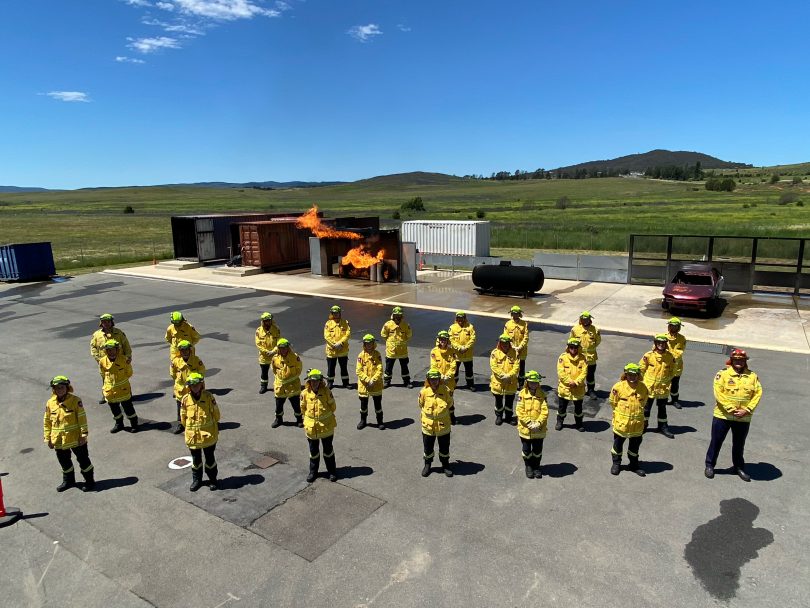 An additional 10 members with previous firefighting qualifications were also recruited into operational roles at the ACT Emergency Services Agency.

“You need dedication. There is a lot of theory work in the classrooms and long hot days out on the tarmac with practical work,” he said.

“It is really fun and you meet some great people and gain great skills.”

For some recruits like James, it’s not their first encounter with disaster volunteering. He continues to serve in the ACT State Emergency Service (SES) after two decades, including during the 2003 Canberra fires when he spent five to six weeks working nonstop 12 to 14 hour days.

But when asked if heading into danger is still nerve-racking after 20 years, James said that “once you get out in the field your nerves disappear and your training kicks in”.

“You are not really thinking about the danger, more about the job at hand.”

It is a similar experience for Jaimie, who also volunteers with the SES and the Community Fire Unit.

“The people around me make it possible and the training that is provided makes me feel comfortable and confident in my ability,” she said.

READ ALSO: Georgeina’s baptism of fire puts her in good stead for the bushfire season ahead

ESA Commissioner Georgeina Whelan thanked the volunteers who “worked tirelessly to protect the community both in the ACT and across borders” throughout the bushfires and 2020.

“The 2019-20 bushfire season continually saw how hard our skilled firefighters and support crews work to keep us safe when bushfires and emergency situations threaten and I offer my sincere thanks and gratitude to all the ACTRFS members for their outstanding efforts,” Commissioner Whelan said.

Around 450 ACT firefighters went on more than 1180 deployments and spent over 2,200 days volunteering over the summer.

Recruitment will re-open in 2021. For more information on joining the ACT Emergency Services Agency visit esa.act.gov.au.

Mechanism Of Action - 44 minutes ago
Nugget Harris as they should be View
Silentforce - 10 hours ago
Another solution would be to enforce pedestrian laws (if any in the ACT). Working in Civic, each day I witness jay-walking, c... View
Tāmati Kentwell - 10 hours ago
Hugh Gregory most income based schemes like this take into account number of dependents View
Community 43