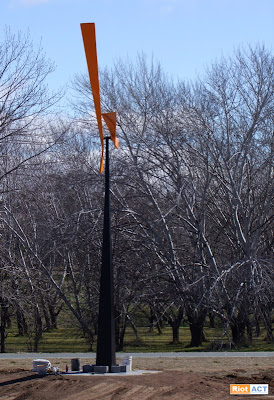 When approaching Woden’s great Round-a-bout ‘O Destiny from the North drivers can now be distracted by a majestic wind sculpture.

It went up yesterday and the blokes building it reckon there are no motors, just the wind on the blades.

I think I saw something very similar at the last Bondi Sculpture By The Sea, but I’m liking this installation. More info when it comes to hand.

YouTube of it in action and a slideshow below.

The Stanhope Government have unveiled yet another wasteful public art project on our roads instead of devoting attention to basic infrastructure, Shadow Minister for Urban Services Steve Pratt said today.

The new public artwork, described as an 11 metre tall, wind activated kinetic sculpture, recently installed at the junction of Yarra Glen, Melrose Drive and Yamba Drive is not only unnecessary, but also poses a serious traffic hazard for motorists on this busy intersection.

Another Update: artsACT has a brief on it:

Dinornis maximus has recently recently been installed at the junction of Yarra Glen, Melrose Drive and Yamba Drive.

The artwork forms a striking gateway on the northern edge of Woden Town Centre.

The sculpture uses fully-sealed rolling bearing systems designed for longevity and environmental resilience to create ‘a wind powered ballet in the sky’.

In describing his artworks New Zealand artist Phil Price says he seeks a ‘… combination of movement that provides a flow and a dance’.

I saw a much more elegant version of this sculpture some decades ago in an outdoor gallery, somewhere overseas. It was stainless steel and the arms swung more, in more directions, always seeming to be about to collide, but then repelled, as if by magnetism or some trick of momentum. This one is a total ripoff. The constrained movement of the sculpture’s armatures annoys the shit out of me, especially when I’m cycling past in a ferocious headwind – I at least expect some kinetic excitement!

I’ve been googling and wikipedia-ing like crazy but can’t find the sculptor’s name. Anyone know?

It only cost 140 thousand – peanuts for a huge steel sculpture.

And it is over 100m from the intersection.

It’s stuff like this that makes a city interesting and provides some character. So what if you don’t think it’s pretty, it’s engaging people, and that’s the point of art, is it not?

giagantus wastis of moneyus?
perhaps they could invest in some artwork that doesn’t look like they recovered it from mugga way tip.

Is this the first piece of major public art in Woden?

Nope, but Steve Pratt has wiped out all the others.

Maybe the government will add it to it’s “artwork” register before someone accidently mows it down with their stolen car.

This artwork is faux.

At night the blades are stowed in an off position. During the day artifical wind or power turns the blades.

Crappy Kiwi artwork, should be necklaced.

I like it. There should be more of them. Make Telstra tower into one big one.

didn’t steve get released after the aust govt intervention, when he was on spying charges as an aid worker in a foreign land?

not really a POW, unless he was spying…

and now he is commenting on art. as a member of the opposition.

great to see where the important issues are.

And I think it really suits Woden. Maybe it is a little close to the roundabout, but it shouldn’t be that distracting.

…not sure what to make of that.

Just quietly I think this sculpture was completed a few years ago, and was possibly looking for a home – it may have come at a good price.

No inside knowledge there, but if you look it up, it was previously located elsewhere, it’s not a newie.

And I think it really suits Woden. Maybe it is a little close to the roundabout, but it shouldn’t be that distracting.

When they put the billboard up on the convention centre people whined that it would distract drivers – it doesn’t seem to have been a disaster.

Well, I think I speak for myself when I say that a ‘Pissed Parrot’ piece would be very well received on the GDE.

Surely we could have someting like ‘Pissed Parrot’ by Bruce McBruce from Blackstumpville?

And i’m sure it cost less than the 2.5 million they are giving to ACT soccer. Why not spend that money on infrastructure?

Any port in an election….

And i’m sure it cost less than the 2.5 million they are giving to ACT soccer.
Why not spend that money on infrastructure?

And i’m sure it cost less than the 2.5 million they are giving to ACT soccer.
Why not spend that money on infrastructure?

Anything that annoys Steve Pratt is fine by me.

Anything that annoys Steve Pratt is fine by me.

*hehe* Isn’t somebody paid to do that already?