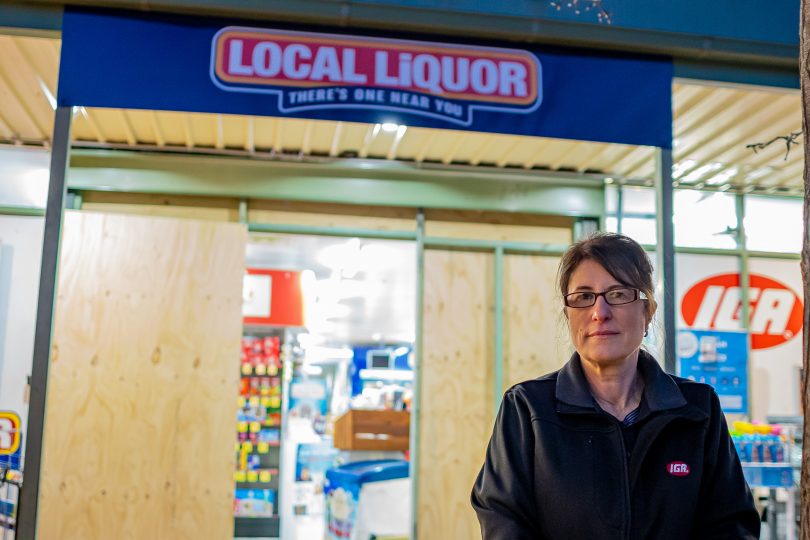 Ngunnawal IGA and Charnwood Newsagency have been hit in ram-raids in the early hours of Monday morning (24 June) as police investigate the links to both attacks.

Around 3:30 am a vehicle, believed to be a Toyota RAV4, was used to damage the front entrance of the Ngunnawal IGA. Around 4 am, police also received reports of a ram-raid at the Charnwood Newsagency.

Police believe a dark coloured Toyota RAV4 was used in both incidents, which was later found burnt out near Owen Dixon Drive in Spence.

Speaking on Monday afternoon, Station Sergeant Rod Anderson the vehicle is believed to be stolen in Weston Creek late last night or early this morning.

“These are just opportunistic thieves who used cars to break into the shops,” he said. “One of the shops they didn’t actually get into because the protection around the shop stopped the attack. They stole low-value items but caused an incredible amount of damage to buildings.

“These are people who are struggling to make a living with small business and this sort of impact and damage caused to the shop closes their business for some time but also causes a lot of damage.”

Earlier this month, police released dramatic CCTV footage of ram-raids that occurred in Canberra’s south, after Repco store in Greenway and Domino’s Pizza at Weston were hit on 13 June. Police said they are investigating possible links to all four incidents.

“We are looking for a few people,” Station Sergeant Anderson said. “We can’t confirm how many people were involved at this stage but it was certainly more than one.

“We are not concerned that there is any sort of spikes in these crimes. These are opportunistic thieves and eventually, we will catch up with them.”

Police are calling for witnesses of the two incidents and anyone who has dash-cam footage of the RAV4 in the early hours of this morning to contact Crime Stoppers on 1800 333 000, or via the Crime Stoppers ACT website.

Jenny Lawrence - 13 minutes ago
Joshua F. Johnson any form they take, including the current one, closes off some uses - that's not an argument not to conside... View
Joshua F. Johnson - 19 minutes ago
Jenny Lawrence they’re not “ovals” they’re just open outdoor spaces. You might want a pool there. You want want the D... View
Frank Trapani - 50 minutes ago
Garvin Francis , thanks for your patience and good comments but, we should be concerned with modern average block of land tha... View
News 2

JS9 - 48 minutes ago
The solution is relatively simple. Its called petrol stations becoming EV stations, which in a lot of areas will be the solut... View
Elf - 1 hour ago
Reality is, at the moment these are ok as a second car. If you want to be able to travel, there is no infrastructure to enabl... View
News 18

Robert Cox - 1 hour ago
"...it was overall an effective way to have stimulated the ACT’s post-lockdown economy" is an odd way to define "inconclusi... View
Tina Newsome - 17 hours ago
Did not even get a sniff in with this scheme and neither did anyone that I know. I'm rather dubious about that '30,000' figur... View
Opinion 9

Off-the-plan homebuyers will be better protected from developers walking away from contracts with new ACT laws limiting the use of...
Community 28

Canberra's 31 dryland ovals could soon be given a new lease of life, with the government promising to consult with...

@the_riotact @The_RiotACT
Could a bot deliver your big breakfast? One #Goulburn café is putting robot waiter 'Bella' through its paces https://t.co/CPpFBoI4K3 (3 hours ago)