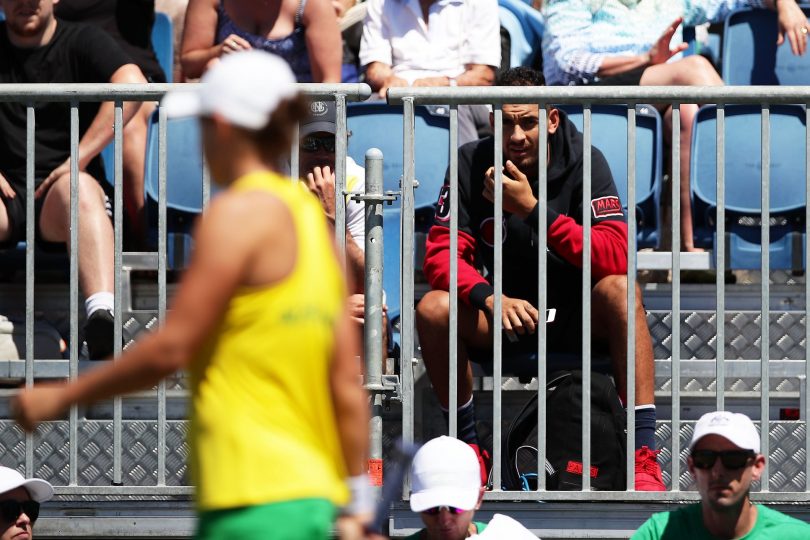 Canberra tennis star Nick Kyrgios has taken to Twitter to call out double standards after Daria Gavrilova’s hissy fit at the WTA event in Mexico this week.

The Canberra local said he would have been “banned for six years” if he’d behaved like his fellow Australian and questioned the double standards of the media.

Gavrilova, the world No.26, lost her cool after double-faulting to give a break of serve to her opponent at the Mexico Open, throwing her racquet from the baseline all the way to the net, just missing two ball kids.

Daria Gavrilova is lucky the racquet missed the ball boy and she was not disqualified.#Acapulco #AMT2018 pic.twitter.com/dZGecYNY3K

Luckily for Gavrilova, the racquet missed the ball kids. Had the racquet hit the child, Gavrilova would almost certainly have been disqualified.

Kyrgios thought if he had been in Gavrilova’s shoes, a harsh penalty would have ensued.

I would be banned for 6 years and been on every paper and news channel for the next month https://t.co/zyQLl2i6eA

But even with some support from his tennis friends, tennis fans around the world had their own say.

Some said that if he “had any other job [he] would have been fired years ago”.

Other fans questioned him “taking cheap shots from [his] imaginary moral high ground?”

Another said that he would have received a harsher judgement because he has “a history of bad behavior…she doesn’t!”

Australia’s number one male player has quite the track record himself. The Canberra local has had a bad boy image since he broke into the tennis scene, once escaping with only a code violation when a racquet he slammed into the ground bounced into the stands at Wimbledon in 2015.

Do you think there are double standards in the media and from fans when it comes to Kyrgios’ misdemeanours?

When Gavrilova has your track record of swearing, abusing officials, tanking and fines THEN it’s a double standard. Not before.

It obviously slipped out of her hand in a fit of frustration. I love the passion of these wonderful athletes ... I'd rather they throw something that verbally abuse and intimidate others ...

Unless it hits you 😉

Any racquet throwing should automatically disqualify a player.

That racquet throw in the video is definitely scary - I didn’t realise being a ball kid was quite that dangerous!

Sean Kinmonth - 28 minutes ago
I thought the ACT had the second cheapest supply due to 100% renewables. Only Tassie had cheaper due to hydro. From what I re... View
Sean Kinmonth - 40 minutes ago
There is a risk with every power source. The link is particularly biased and tells half truths and should be discounted as be... View
dulynoted - 4 hours ago
the electricity market in australia seems rigged, we pay way more for electricity than other countries with similar generatio... View
Sport 4