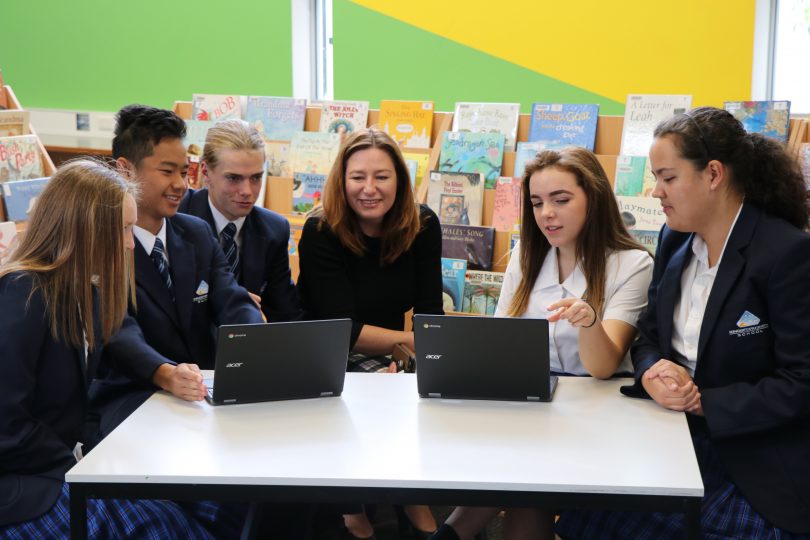 Education Minister Yvette Berry has sought to clarify confusion about whether ACT schools are closed due to coronavirus by declaring that no child will be turned away from any ACT public school.

The Catholic school sector has also clarified its position, announcing that its schools will stay open for the rest of the term ahead of moving to online learning in Term 2.

Admitting that NSW’s decision to close its schools had forced the ACT’s hand in moving to pupil-free days and establishing online learning programs, Ms Berry contradicted schools that had messaged parents telling them not to send their children to school this morning.

“Our schools are open, and teachers and school staff will be operating out of our schools where possible,” she said.

If parents needed to send their children to school because they had to work or some other reason, they would be welcomed and would still receive face-to-face teaching.

But with Victoria and NSW pushing to close their schools as part of the campaign to stem the spread of COVID-19, contrary to advice from the Chief Medical Officer, Professor Brendan Murphy, the ACT could not stand alone and needed to take a regional approach, Ms Berry said.

“We simply have to do that, we can’t be doing this on our own, we’re an island in the middle of NSW,” she said.

Ms Berry insisted that schools were safe but the pupil-free approach would allow teachers to develop alternative programs that would be needed if it did come to a complete lockdown.

ACT Council of Parents & Citizens Associations said earlier today that parents were confused and frustrated with the mixed messages and lack of detail.

They were also concerned about vulnerable students, children of essential workers and parents unable to provide supervision at home, as well as the potential loss of learning time for Year 12 students and implications for their ATAR scores.

Ms Berry said she had been meeting with all stakeholders to address these issues.

She said pressure had already been mounting with 40 per cent fewer students at some ACT Government schools, forcing teachers to cater to both class and online students.

She rejected suggestions that teachers were concerned about their own health and safety.

“What they were worried about was how their students were coping in a school environment, with all the anxiety about the pandemic,” Ms Berry said.

Teachers and school staff would now be developing alternative, age-appropriate online learning programs to be delivered in Term 2. She said the ACT was well positioned to go digital.

The Education Directorate would also be providing assistance to parents so they could help their children adapt to the new learning mode, as well as tablets or laptops to families which needed them.

“We hope to guide parents along the way. Today we released an online library resource to give parents some ideas about what they can do at home while we’re developing this online education,” Ms Berry said.

Ms Berry said there would be follow-up assessments after the crisis had passed to identify any learning gaps as a result of the move to online education.

In a letter to parents, Catholic principals have advised that schools in the Canberra and Goulburn Diocese will remain open until the end of Term 1, including Early Learning Centres and Before and After School Care, but parents may choose to keep their children at home, and schools will also be moving to full online programs in Term 2.

Pretty clear the Barr/Berry duo will fumble the crisis. Can’t even get basic messaging done, and then when they do apologise for their incompetence, it’s “I’m sorry you misunderstood” and not “I’m sorry I’ve been out of my depth for years and still won’t admit it”

I got a few completely unambiguous notes from our school that children are not to be sent to school and that alternate arrangements would be made for children of essential personnel and these details would be provided ASAP.

Here’s a thought, don’t be a sheep and wait for someone else to make a decision for you….have a good think about it…. then make your own decision (me….. if I had school age kids still they’d be staying at home)

Vicki Carn get away with your logic! 🤪

Victoria Red what is ELC? Sorry for ignorance..

Victoria Red Early learning centre? Same thing. Don’t send if you’re able to keep them home. Do send if you’re working as an essential services worker and need them looked after.

Of course I’m confused. I’m being told different things by the ACT minister, the prime minister, then I get a highly ambiguous notification about whether I ‘may choose’ to send my children to school from the principal, followed by a non-specific notification that I should send my children if I ‘need’ to… All this contradiction is outrageous at a time when anxiety is riding high enough in the community 😠

Vic Franklin I think it’s straight forward actually. Do your children need to be at school so you can work in an essential service area? Yes? Send them
No? Keep them home.

I’m not sure what makes people so confuse?really!

Sharon B Rebucas depends where you’re getting your information.

It’s like every official is writing their own opinion piece.

Scott Clegg I notice that Ms Berry said teachers were not anxious about schools remaining open. She is obviously not listening.

Catherine Campbell I doubt she has the ear of most teachers… just sayin. :/

Completely NOT what we were told as teachers today. We were told only children that had both parents in health care or education would be catered for. Barr is making a complete mess of this.

I wish there was some information on childcare centres. Keeping my high schoolers home, and my instinct is screaming that why are we keeping school kids as safe as we can in terms of avoiding transmission and flattening the curve, but what about our littlest people, who notoriously spread and share germs like no one else can 🤭

Melinda Gonczarek it makes no sense does it. We need an all in approach or it’s pointless.

We received an email

Kath Ras I actually did from my centre also but they are on tenterhooks staying open in the absence of a direction to close. But it’s just so confusing that schools would actively encourage us to keep our kids home and accept online learning, but childcare would remain open. I totally get the enormous costs associated with this issue, and of course care for children of essential services, but keeping the current status quo just seems so at odds with other advice/decisions.

Richard thank you. Understand the need for childcare for so many families but it also seems so unsustainable to keep them open in the face of so many other closures.

My children’s school was very clear in saying that children were not to go to school. There was a brief mention about children whose parents work in essential services saying information will be provided as soon as possible.

Charmaine Vearing the Minister acknowledged that there was confusion regarding the incorrect communication. All schools were relaying the information as it was provided to them. Ideally, if children can stay at home, that would be better for educators to focus on preparing for future online education delivery. If children do attend schools it is likely they will be in combined class, not necessarily with their regular teacher.