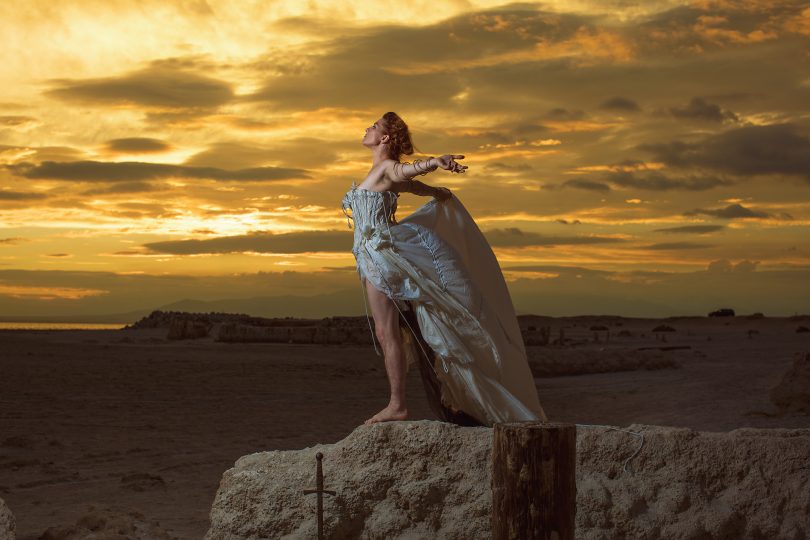 Amanda Palmer finds herself alone on stage in There Will Be No Intermission. Photos: Allan Amato.

Amanda Palmer’s latest album, There Will Be No Intermission, has two modes: respite and devastation.

“That was actually a really beautiful mistake,” she tells me by phone. We’re discussing the musical interludes that lead in and out of each song on the record – the respite, if you will.

Palmer dashes into the next room. Her “know-it-all British friend” will have the answer. There’s muffled speaking for a moment and then, “Overture!”

Our chat was full of moments like this, reminding me that Palmer has constructed a career out of radical honesty, radical inclusiveness, radical respect for her audience. Those cut-up orchestral tracks in between the emotional slaughter on her album are her way of giving the listener room to recover. They’re palate cleansers in between the songs themselves, which deal with grief, abortion, and generally some the heaviest subject matter of Palmer’s career.

“They were literally put in there for practical purposes,” she says. “To go get another drink and a Kleenex and come back.”

On her current tour, Amanda Palmer is distilling that forthright humanity into its most potent form, sending herself out on stage with nothing more than her piano, her ukulele and her stories.

“It’s really liberating,” she says. “Because I am alone on stage, and I can pivot energetically if I need to and it doesn’t mess up anybody else’s night.

“I’ve had a couple of nights on the European tour for instance where I was just simply too exhausted to do the show as it was scripted and I literally threw it out the window and did requests all night. Because I felt like it.

“I got into rock and roll because I wanted pure freedom. When I was a kid that was the job that looked like pure freedom. And then I got into this job and realised it can become a grind if you’re not careful.

“But I think I build my tour and my carer and my life in such a way that I’m never being told what to do, including by me. I’m never being told what to do. To have a one-woman show about the trials and tribulations of abortions and miscarriages and just throw it all out the window and just play Dresden Dolls songs, that’s just as punk rock as being in a punk band. It’s about pure creative expression and not being tied down by the machinery.”

The rock and roll lifestyle has led her Down Under numerous times. Palmer’s relationship with Australia stretches farther back even than the first tours with her band The Dresden Dolls. She attended Adelaide Fringe in 2000 “literally as a statue” before a career as a rockstar performance artist was even on the cards.

“It’s the tragedy of rock and roll touring, that you go to all of these places that you generally don’t spend enough time to actually be in them. I have tried all my life to engineer my schedule and my life so I’m not just seeing the superficial side of the city instead of actually being in it and connecting with it.

“I’m going to Darwin for the first time on this tour and I’m going to try to visit my patrons up there, if there are any. I don’t even know if I have any patrons in Darwin, I might have five. But if I have five I’m going to f–king go to a bar with those people and soak up that life. If you don’t do that this whole job can start to feel purposeless.”

Luckily, Canberra is one place she has found the time to explore over the years.

“A lot of musicians who tour to Australia don’t even go there, and I’ve gone on multiple bike rides with Rat Patrol now, and I’ve drunk in the bars and eaten in the cafes and wandered around and I’ve played the carillon, and done all sorts of weird things.”

Amanda Palmer brings There Will Be No Intermission to the Canberra Theatre Centre on Friday 7 February. Tickets from $75.00 + booking fee via canberratheatrecentre.com.au.

Toby McLenaghan - 24 minutes ago
Peter Marshall well it will be better then before. 🚴🏻💨 View
Marion Rae - 8 hours ago
Election year in a bellwether seat View
Hope Marie - 9 hours ago
Grace Stefanac now I can't crash on it wow View
News 10