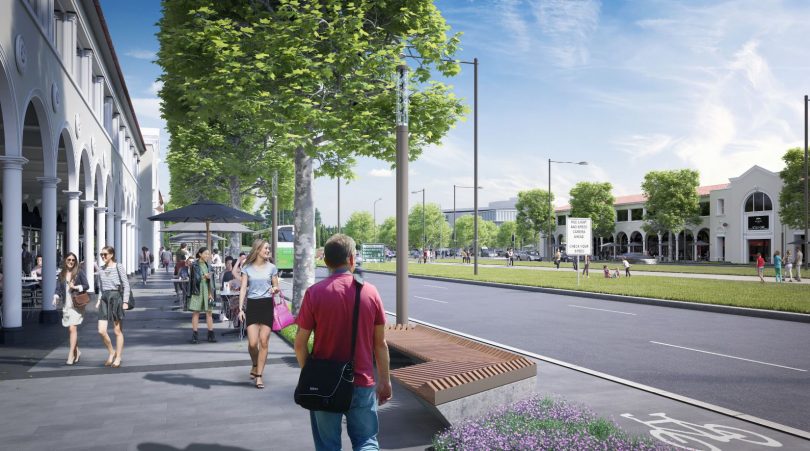 An artist’s impression of the proposed Northbourne Plaza. Stage 2 of light rail will start from the green space. Source: ACT Government.

Plans to transform the area in between the Sydney and Melbourne buildings on Northbourne Avenue into a plaza have gone to the National Capital Authority for approval and public comment.

The ACT Government has also submitted the design of the Alinga Street light rail stop to the NCA.

The design of the light-rail driven Northbourne Plaza redevelopment in Civic includes the moving of bus stops and layover space in front of the heritage-listed buildings so the verges can be widened.

Minister for Transport and City Services Meegan Fitzharris said the redevelopment would rejuvenate this part of the city, creating more space for pedestrians and cyclists and enabling outdoor dining.

The Minister said the Alinga Street light rail stop would be one of the busiest on the Stage 1 route.

“It will eventually feature as a meeting spot for people travelling through to Canberra’s south once Stage 2 takes shape,” Ms Fitzharris said. 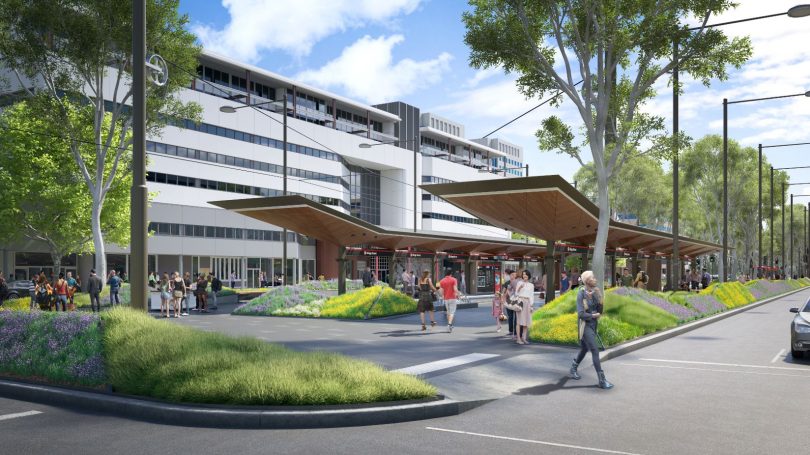 The Alinga Street stop will be one of the busiest of on the Stage 1 route.

The Minister said the plans showed how the city centre would be reinvigorated by smart, attractive design.

“The light rail network will boost Canberra’s sustainable growth by changing and improving transport options, settlement patterns and employment opportunities. It is fundamentally about the renewal of our urban centres,” she said.

When light rail stage 1 is completed the median would be a clear open space ready for the construction of Light Rail Stage 2.

For more information and to comment go to https://www.nca.gov.au/.

What will happen when the trees are planted along the tram track on Northbourne without the bird-proof netting? The white cockatoos will strip them bare, that’s what will happen.

The light rail stop is opposite the Novotel hence why the Sydney and Melbourne buildings are not in the ‘impression’ above.

I can’t see any wind protection on the stops. Could be uncomfortable with a strong breeze and/or rain coming from the south.

The first image is where stage 2 starts – the Sydney and Melbourne buildings are still there.

The illustrator has left out the traffic lights etc. plus it doesn’t look as though they are expecting a crowd of commuters under those narrow roofs!

The proposed ‘Northbourne Plaza’ is a bit dissapointing. Is a flat grassed square with a single gravel path really the best they could do ahead of Light Rail Stage 2?