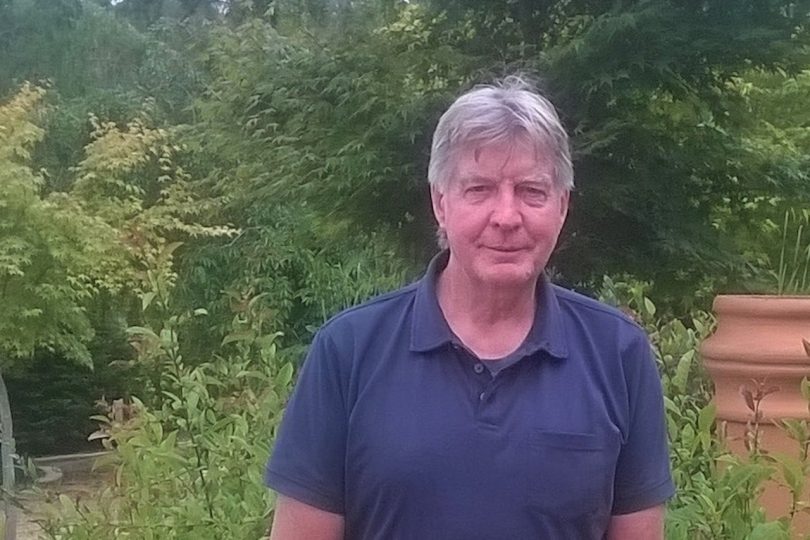 Doug Rawlinson loves to plant and develop his extensive gardens at ‘Kentrove’ in Goulburn. Photo: Supplied.

Doug Rawlinson is a self-taught nurseryman who is making a significant contribution outdoors by not disturbing the soil. But that’s not to say he isn’t turning over ground in a network of gardens on his 14-hectare property, ‘Kentgrove’, in Goulburn. Most days his fingers are deep within planting or potting mixtures.

As the formal gardens grow, a 6.5-hectare conservation area on ‘Kentgrove’ is left alone for birds, insects and native animals. Striking Australian diamond firetail finches flit about under centuries-old gums. Along with black-hooded robins and flame robins, the red-beaked, firetails are among 80 bird species identified on the property.

There are thousands of gum trees, some very old, including eucalyptus polyanthemos (red box) and five giant eucalyptus viminalis (ribbon gums) thought to be 200 to 300 years old.

“It’s a fantastic corridor between the Cookbundoon Range and Mount Gray,” he says. “It is the sole conservation area within Goulburn’s boundary.”

Arriving in 2006 after buying the property, Doug found a degraded legacy of an orchard and sheep station on Goulburn’s eastern fringe.

“It was drought-affected and very rundown,” he says. “Now it’s a showcase for sustainability.”

Doug’s horticultural skills emerged years earlier in his Goulburn backyard at Addison Street, where he rented an acre of land behind his house from the council.

“I grew everything there and sold it to farmers,” he says.

Doug also worked in the garden of historic ‘Riversdale’, and soaked up knowledge from older horticulturalists and then established his own nursery in the heart of Goulburn for 15 years. By the time he sold the business, he had won industry-wide recognition. 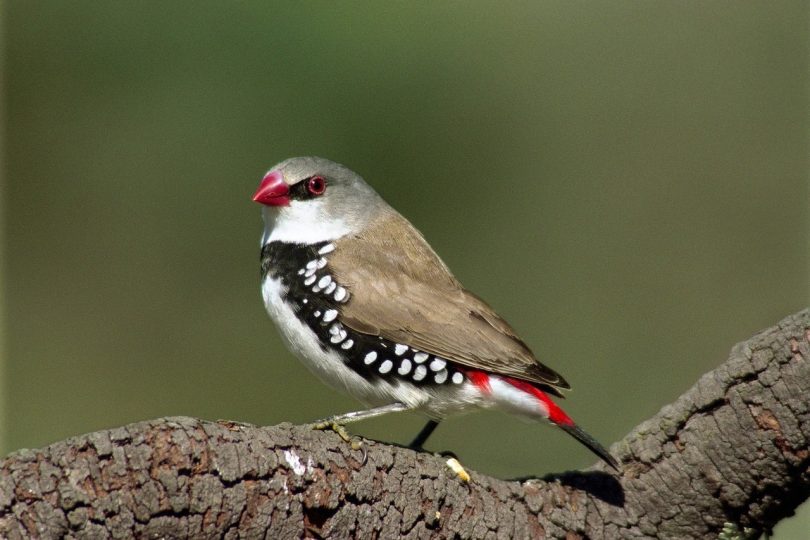 The diamond firetail finch is among 80 species of birds at ‘Kentgrove’. Photo: Helen Fallows/NSW Department of Planning, Industry and Environment.

Then he bought ‘Kentgrove’. The landscape began changing a month after the Rawlinsons arrived.

He also planted about 500 deciduous trees.

A megalitre-dam, plus a bore that can deliver 800 litres an hour, and tanks holding 250,000 litres water his rainforest room, Japanese knot, Victorian kitchen and native gardens, plus the sweeping English parkland.

All of these gardens underline Doug’s journey as a nurseryman that gathered momentum from 1996 to 2011, when he built and ran Greenlife Nursery in Ellesmere Street, Goulburn, with his wife, Sharon.

Formerly a vacant car yard where Geissler Motors previously sold secondhand cars, the nursery sat on a bitumen surface behind a 3.2-metre-high steel fence which Doug made.

He directed water runoff to collect at one point from which it was pumped into storage tanks.

“In the middle of a very bad drought we didn’t use any [town] water,” says Doug. “I bought water in from home and we survived the drought well because I was sustainable.”

He built a huge showroom for much of his wholesale plant stock. He grew seedlings into bigger plants to add a few dollars to the retail price as Greenlife Nursery competed with Goulburn’s large nurseries, Gehl Garden Centre and and Craig’s Nursery.

The Southern Star nursery, Magnet Mart and Kmart were also in the nursery market until the drought closed or severely reduced their trade. 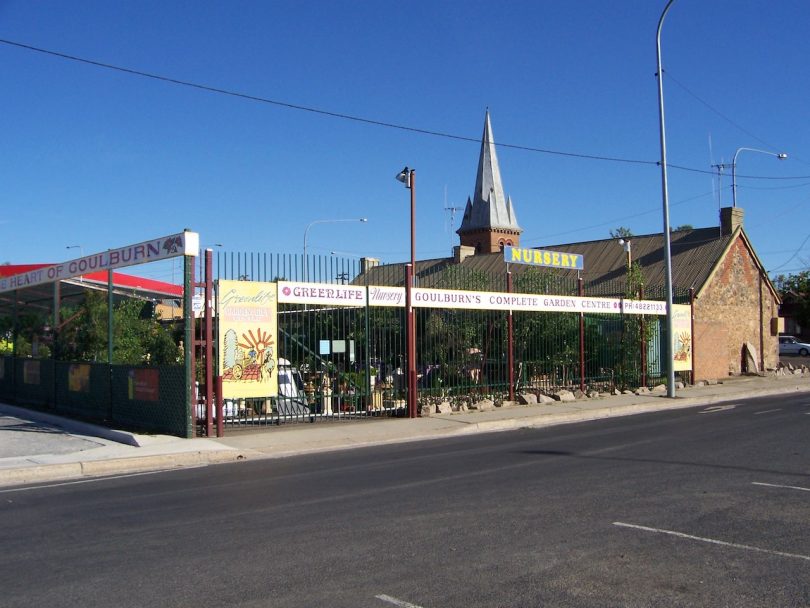 Greenlife Nursery, on the original backyard of three bluestone cottages neighbouring the nursery, soldiered on through the drought, opening seven days a week. One winter, snow fell so heavily that Doug could not make out where the outdoor plants were.

“We also had extreme heat where we had to water maybe three times a day,” he says. “Because Greenlife was small and sustainable and I knew what I was doing, it was all workable. I didn’t have employees, and I could do everything myself.”

A big sign along one of the fences read ‘An oasis in the heart of Goulburn’.

“I had wonderful customers, and made wonderful friends,” says Doug.

After 15 years enjoying the highs of growing and selling plants and trees, he put Greenlife Nursery on the market and subsequently sold the site to Stacks Law Firm.

“The nursery industry is refreshing, and really good,” he says, reflecting on that time.

By the time he purchased ‘Kentgrove’ Doug was keen to continue growing plants beyond the sizes suitable for Greenlife Nursery. He is happy to share the land with Australia’s wildlife, too.

Jason Benjamin Law - 5 minutes ago
No sports star or celebrity deserves a pedestal. View
Camille Martin - 52 minutes ago
Milenko-Slavenka Jovanovic then what is it to you either? View
HiddenDragon - 1 hour ago
It would be easier to take seriously the federal government's utterly over-the-top reaction to Djokovic's stance on vaccinati... View
News 13

Amy Broadhurst - 5 minutes ago
Beth Gratton looks like it’s finally happening! View
Errol Jobsz - 1 hour ago
$10 million won't go far on that road. View
Brett Griffiths - 2 hours ago
Excellent! It’s the best bypass road, onto Jerangle then Bredbo, for when the Monaro highway is shut down, as it was recent... View
News 6

Emma Louise - 16 minutes ago
Vik Sundar didn’t you use to work here decades ago 🤔 View
Helen Kvalheim Stephenson - 27 minutes ago
We left in 2017. We were lucky. They were only looking after there own interest and charging exorbitant prices for that advis... View
Colin Parton - 27 minutes ago
Farhan Khaliq maybe. Lots of stories to tell. View
Opinion 142

JC - 1 hour ago
Is it the place of government or media to commemorate someone in that way? Whilst I cannot imagine what it would be like to l... View
Futureproof - 2 hours ago
I have COVID and in isolation. I needed to see the doctor for another matter, but couldn’t due to being infected. So now, I... View
kenbehrens - 3 hours ago
There seems to be a trend to talk down the loss of someone to Covid, by referring to them as a number, minimising the signifi... View
Lifestyle 20

Linda Stapleton - 3 hours ago
Leading up to Summernats it got noisy around here. The hoons started with their fun and games as they saw it and the police t... View
What's On 2

Following the recent storms which tore through large swathes of the Belconnen and Gungahlin region, many residents have voiced their...
Opinion 142

When asked the age-old question of whether I am a cat person or a dog person, without any hesitation, I...
Opinion 378

I know it’s a generalisation, but many Canberra residents appear to have an uncomfortable relationship with anything to do with...
Opinion 139

Boom and bloom: nurseries rushed as Canberrans go to ground

@the_riotact @The_RiotACT
Staff shortages due to COVID-19 are hitting every industry, including government services here in the ACT, with two #AccessCanberra service centres currently closed https://t.co/r9MnF3PXCY (46 minutes ago)