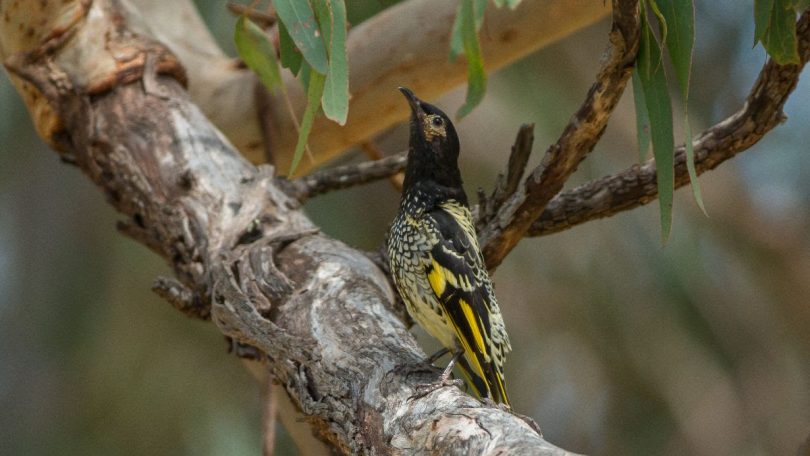 The critically endangered regent honeyeater is losing its ‘song culture’ due to the bird’s rapidly declining population. Photo: Murray Chambers.

Singing the wrong words to a favourite song is one of the more stupidly annoying things a partner can do, but in the bird world, it could be the difference between survival and extinction.

New research from the Australian National University (ANU) has found the critically endangered regent honeyeater is losing its ‘song culture’ due to the bird’s rapidly declining population and that could be speeding its push towards extinction.

Just like humans learning to speak, many birds learn to sing by associating with older birds of the same species. They risk losing this skill if adults become too rare, and if they don’t learn to sing a sexy enough song, their chances of mating are reduced.

“If endangered birds are unable to learn how to sing correctly, it seriously impacts their ability to communicate,” said the ANU study’s lead author Dr Ross Crates.

“It could also be exacerbating the honeyeater’s population decline because we know a sexy song increases the odds of reproduction in songbirds. Females will avoid males that sing unusual songs.

“Loss of song culture is a major warning sign the regent honeyeater is on the brink of extinction and we still have a lot to learn about how to help them.”

READ ALSO Do you have a bluey in your Canberra backyard?

Once widely distributed in southeast Australia, extensive land clearing has destroyed the regent honeyeater’s habitat and caused the population to plummet.

The birds are now rarely spotted in Canberra – the most recent being in Justice Robert Hope Park, in Watson, about 18 months ago.

Regent honeyeaters are most vocal during the early stages of their breeding season. Before the population decline, the birds were known for their soft, warbling song produced with characteristic head-bobbing.

The ANU study began in 2015, with researchers studying the wild population to help conservation efforts. The song finding was almost accidental.

“We were recording as many birds as we could,” said Dr Crates. “Then we noticed they were singing these weird songs.”

The study found that in places where there were still reasonable numbers of regent honeyeaters, males sang rich and complex songs. Where the birds were rare, males sang simplified or ‘totally incorrect’ songs.

According to world-first research published this week in the Proceedings of The Royal Society B journal, the birds are instead copying the songs of other species.

“For example, 18 male regent honeyeaters – around 12 per cent of the total population – were only able to copy the songs of other bird species,” said the study’s co-author Dr Dejan Stojanovic.

“This lack of ability to communicate with their own species is unprecedented in a wild animal. We can assume regent honeyeaters are now so rare that some young males never find an older male teacher.”

The study also showed regent honeyeaters born in captivity have totally different songs to wild birds. The research team believes this could prove crucial when it comes to conservation.

“The unusual songs of captive-bred birds could reduce their attractiveness to wild birds when they are eventually released,” said Dr Crates.

“So we’ve devised a new strategy to teach young captive regent honeyeaters to sing the same song as the wild birds by playing them audio recordings.

“Loss of song culture is a major warning sign the regent honeyeater is on the brink of extinction and we still have a lot to learn about how to help them.”

Dr Crates said ACT birdwatchers could help with the research and recovery effort by recording any regent honeyeaters they might see in the region on the Birdlife Australia database.

“We can use that data and, if the bird is found during mating season, we can record its call,” he said.

“If you think you have seen a regent honeyeater, please try to take a photograph. They are often confused with other birds.” 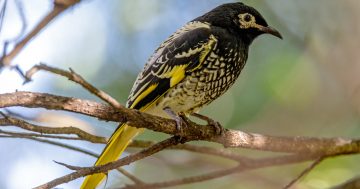