This is the fifth part of a series of photographs taken by RiotACT reader Old Canberran on his Kodak Box Brownie in 1948.

Attached is a pic of the old Hotel Civic which took up the block bounded by Northbourne Ave, Mort Street and Alinga Street. The public bar faced Alinga street and it always intrigued me as a young 11 year old why there were so many blokes spilling out the doors around 5 to 6 pm in the afternoons. The noise from the place was amazing. Years later I found out about 6 o’clock closing.

It was a grand old building and for years before it was demolished in 1984, it used to have the best smogasboard lunch in Civic in the 60’s and 70’s. In 1965 a group of women chained themselves to the public bar in protest that women were not allowed in that bar but had to drink in the saloon bar as per the law in those days. 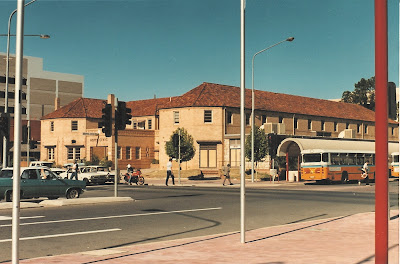 UPDATED: In a bonus round, “A Noisy Noise Annoys An Oyster” has dug up his own photos from 1985 (OC was out by a year on the demolition it seems), and sent them in with this note:

I have found these pics of the pub taken by myself in January 1985 after the decision to demolish the pub was made. I took the pics because the pub was about to be demolished. The first pic was taken from the median strip in Northbourne Ave, the second was taken from the corner of East Row and Alinga St. Presumably the demolition took place a month or so after these pics were taken.

Wow, back to the halcyon days when the bus interchange actually had shelter! 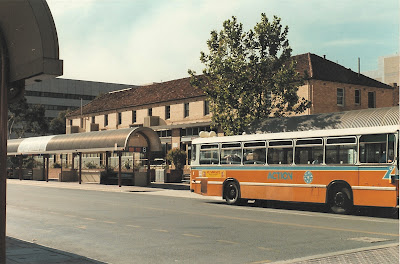 “Wherefore art thou, myne ACTION bus? And lo! I hath forsaken my bodkin for a jerkin.”

For some reason the old Civic Hotel makes me think of the Kingo. It is a shame that it is gone – Canberra is light on for licensed venues with character and history…

I miss the Private Bin too.

Makes me lament the lack of soulful bars in this city. Now we get our change slid to us on a a little white saucer (***audible sigh***).

Who cares, Gingermick? I sure as hell drank enough there on one of the best nights of my life! I’m glad those sisters chained their hairy legs to the blessed pub!!

Old Canberran, I will say only this …. If your girlfriend tells you she’s been invited to meet somebody’s older brother at the pub after school, and if she asks you whether she should go, do not tell her that you “don’t care” – especially if you really do.

It is such a pity a decent architect wasn’t found who could incorporate the facia into a new building.

Great pics. Many thanks. Brought back memories of waiting for the 430 from City to Belconnen when I was at school

I’ve still got some of those orange and blue paper bus tickets somewhere.

At least they don’t have vinyl seats anymore.

Oh look, we still have those same buses! 😛

For some reason the old Civic Hotel makes me think of the Kingo. It is a shame that it is gone – Canberra is light on for licensed venues with character and history, at least from the early days.

Love these old photos – thanks for sharing, OC.

Great pics in 1985. The building still looks up to scratch and better than some of those around it. Apologies for the 1984 demo date but I got that from Wikipedia which said it was late 1984 early 1085.

Did they knock this over to build Pandoras?

As a matter of interest, once the hairy-legged sisters won the right to drink in the Public Bar – they never did.

Yes….it seems we tore down all the buildings with character & then heritage listed the ugly, sterile office buildings. Wrong way around, in my opinion.

Great photo. Bit of a shame that building is gone, seems to me the city centre could use a bit of character.

…There wasn’t much in the way of houses North of Haig Park.

That’s right. Our house in O’Connor was built in 1958. The house behind us built before ours and was originally owned by the grandfather of the current owner. He remembers his grandfather showing him photos of the time and if you looked out the front door of the house (before ours was built) you could see Civic.

I guess there must have been a few residences in Turner/O’Connor around in the early 50s though.

Last year there was a few signs up at Lyneham shops talking about the 50th anniversary of the suburb, but I can’t recall anything ever happening to celebrate the milestone. I wonder if we just happened to miss it???

oc, from what I recall it was opposite the Civic site and one of the few places where receptions could be held at the time. Had a bit of a reputation as a blood bath from time to time though. No different to the Civic then I suppose from my experiences. Seen some things go on in the public bar. Remember when ladies could only drink in the lounge/saloon bar and could only drink fives and their toilet was outside and around the back. Does anyone remember when closing time was a signal to move to the Cock and Bull?

One of the best nights of my live began at the old Civic pub …. *sigh*

And I’ll bet you aren’t going to tell us either, are you Granny?

Wishuwell, You may be right but I doubt it as the fav drinking hole before the Civic was built was Walsh’s Hotel in Queanbeyan. You may be thinking of the Canberra Club which may have been around in those days. It used to be upstairs in the Melbourne building fro memory but I have no idea when it started.

Hi oc, great series. Am I right in thinking there was a drinking hole on or near cnr. of Northbourne & Alinga opposite the Civic site that predated the Civic Hotel. Civic Cafe perhaps?

Peter Athey - 1 minute ago
3 words; flying spaghetti monster serious - look it up. buy yourself a colander... View
Jennifer Crawford - 14 hours ago
Drew 🍜 there are more of you! View
Jac Bec - 17 hours ago
Nicole and strain on our health care because someone chose religion over safety View
News 104

Julie Macklin - 22 minutes ago
James Dof And no one has ever expected trades people to cycle from job to job with their tools. That is just a straw man argu... View
Heather Grant - 3 hours ago
Suggest they hire extras from Deane's and Keir's (and anywhere else close by that have spare buses for hire). Instead of look... View
Ashley Wright - 6 hours ago
Cary Elliot Johnson do you have an example of such a city but when defining decent? define it from a daily users point of vie... View
Opinion 47