“On the wings of a Sparrow” – our local comedic success story 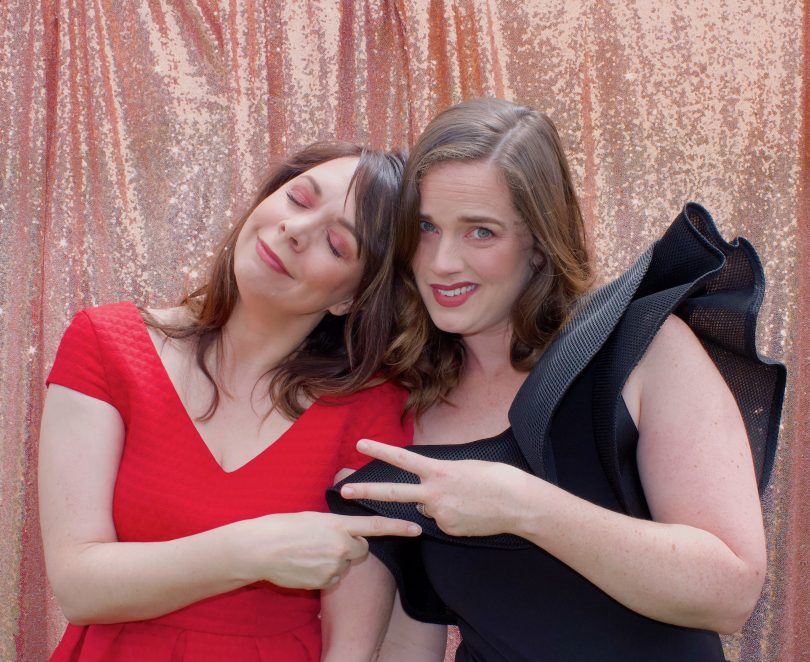 The Sirens of Satire – ‘Sparrow Folk’, made up of Juliet Moody and Catherine Crowley. Photo: Supplied.

We first became aware of Sparrow Folk when they won an ABC Canberra radio competition, “Exhumed”, designed to unearth new talent. And finding Sparrow Folk is like digging up ‘gold’ in our own backyard. I’ve been following them ever since, along with hordes of devoted, loyal, and adoring fans.

Juliet Moody and Catherine Crowley, were originally teachers (Juliet still teaches), when they first met through a mutual friend, at the ‘Belgium Beer Cafe’ one night. It was a long, boozy night and the end result? Their first song: “Naughty Nuts.” It was the beginning of a beautiful friendship.

What seems so obvious to fans (affectionately known as “Nesties”), when you watch “Lark and Fox” play, is that they are having so much fun, it’s infectious.

So many of their songs tackle big issues, like ‘Awkward Anthems’, a regular monthly slot they enjoyed with Adam Shirley on ABC Canberra radio. (Not all so serious, but topical nonetheless, like a certain politician’s penchant for eating an onion!) And songs on bigger issues, such as ‘Love the Vagina’, all about body image, as well as their response to the ‘Safe Schools Program’ among others.

Sparrow Folk describe themselves in terms of genre, as a “glam folk” band, and Juliet told me that they were carving out a new niche for themselves with this style of musical comedy. It certainly is unique and that is one of the joys of hearing them perform.

In 2018, we are in for a real treat as they have already released a brand-new Album (their third) called “Number. Free.” The name for this came about from a story in Catherine’s early working life, as a 16-year-old in a pie shop in Singleton (where she grew up). A customer with a NSW rural miner’s accent came into the shop and asked her for what she thought was a ‘free pie”. Confused the first time she served him, she asked the owner if they gave out free pies. Returning to the customer and advising that he would have to pay for his pie, she then learned to her great embarrassment, that he wanted three pies – not free pies!

Secretive about the content of this new album, we are left on tenterhooks about the new songs and we’ll have to attend their upcoming shows on the 17th and 18th of May @ Smith’s Alternative to get a sneak peek. In 2018, the Sparrow Folk have already returned to the Adelaide Fringe Festival, Melbourne Comedy Festival and the Sydney Comedy Festival.

And in August, you will see them perform at Tales After Dark – Storytelling for grownups, timed to coincide with the Canberra Writers’ Festival – so watch out for that performance! (Get on the mailing list.) In the meantime, you can keep up with them via their website at https://www.sparrow-folk.com

Sparrow Folk is one of our finest comedic success stories. Let’s support them as much as we can and we might just be able to keep them here!

Tracy Lea - 16 minutes ago
They are not ‘stealing’. The rocks are hidden with a message to keep OR re-hide.... View
Opinion 7

Oan Nbn - 38 minutes ago
Best is to have a train route to Yass and connect to National Line from Kingston- Yarralumla- BELCONNEN- Spence and follow Ba... View
Robin Eckermann - 38 minutes ago
Peter Elford New terminus at Gunghalin so there's something other than dormitory hi-rise buildings to feed the tram. View
Elizabeth Ann Thurbon - 47 minutes ago
And when tourists arrive at this station they are left wondering is this really the capital of Australia. They arrive seeming... View
Opinion 188

Ben Garden - 47 minutes ago
How about we get something that’s actually fast like formula one rather than a car I can beat in a drag race in my daily dr... View
Naomi Breasley - 2 hours ago
Sounds teriffic, It will never happen too many Kevin's & Karen's. People's reaction to Summernats is a clear indicator of som... View
Community 11

@The_RiotACT @The_RiotACT
A major apartment #development has been unveiled for the northern gateway to the Molonglo Valley suburb of Coombs that focuses on #sustainable, green features https://t.co/7v4smSFPQJ (37 minutes ago)

@The_RiotACT @The_RiotACT
Did you feel the earth shake? We've got reports of tremors across Canberra, and as far as Batemans Bay and Braidwood. More to come, but tell us what you felt https://t.co/zu4C8IoIqn (53 minutes ago)

@The_RiotACT @The_RiotACT
Working from home is here to stay and governments should not fight it, says new research from the Productivity Commission https://t.co/S3e9HBc9Hg (2 hours ago)