One of these smiles is not like the others 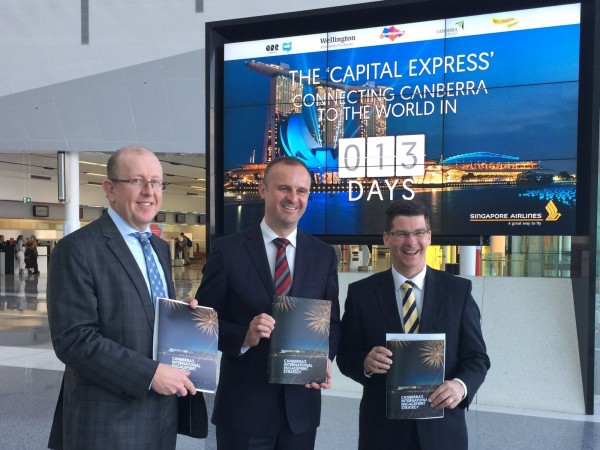 The all-natural gleeful grin gives it away, doesn’t it.

Stephen Byron and Andrew Barr were smiling for the cameras too, but with Mr Byron preparing for one of the most intense periods of his career to date with the arrival of direct international flights this month and Mr Barr facing a gruelling election campaign from tomorrow, their smiles were not like that of the new Commissioner for International Engagement.

There’s a reason for the difference.

Former veteran Liberal MLA Mr Smyth will go to sleep tonight, as the ACT Government enters caretaker mode, knowing that for the first time in almost two decades he is set for a relaxed lead-up to the ACT Legislative Assembly elections.

The former Member for Brindabella has run for public office in seven elections, two Federal and five local, over the past 21 years.

We asked Mr Smyth this afternoon whether he was enjoying the prospect of the quiet campaign period ahead. He was speaking, together with the Chief Minister and Airport managing director Stephen Byron, at an event to mark the launch of a document called Canberra’s International Engagement Strategy.

“Oh well, having heard the questions that you’re asking the Chief Minister, I’m not door knocking, I’m not going to shopping centres and I’m not handing out leaflets. It’s kind of a relief, I have to tell you.”

Meanwhile, Mr Barr is preparing for 37 days of hard work selling his vision to Canberrans. His secret to surviving on the hustings?

“I continue to exercise, obviously a key part of any stressful period is that you get a degree of physical activity together with all the mental stimulus that will undoubtedly come from the election campaign,” he said.

“I will be working seven days a week, that’s the expectation over this period. We continue to engage, the nature of those engagements will vary, from formal debates, to informal campaigning, we look forward to that.”

Mr Byron is entering a busy period too, with the first regularly timetabled direct international flights scheduled to land at and take off from Canberra Airport in a matter of days.

“I look at that screen that reminds me that we’ve got 13 days till our first flight, and that is going to be an enormously exciting event and occasion, and so there’s a lot of work going into the short term,” Mr Byron said.

He noted there was also much work to be done towards long term goals such as daily international flights, the addition of new services into other parts of Asia and beyond and better business engagement between organisations in the ACT and internationally.

* Recognise those lyrics from Sesame Street? “One of these things is not like the others” was written by Joe Raposo and Jon Stone (EMI Music Publishing).

Ashley Wright - 1 hour ago
Josh Shirley and when did you buy this property and how much equity did you have when you brought? View
Ashley Wright - 1 hour ago
Candace Driscoll they never make more than market value of the property. Whilst rent is based on a percentage of income of al... View
Josh Shirley - 5 hours ago
I had a 3 bedroom 2 bathroom townhouse in Melbourne 30mins from the city and the mortgage was $200 a week cheaper than any re... View
Lifestyle 18

Garth Kirwin - 7 hours ago
they need to fix these lovelys up.if canberra loses these canberra loses it soul. View
Kathleen Lee - 15 hours ago
What! They are historical buildings. Don't be so silly. View
Glenys Callaghan - 18 hours ago
I love these buildings, they represent Canberra to me. I hope they are never pulled down as they are part of Canberra’s his... View
News 5

HiddenDragon - 11 hours ago
"...the government should let the market do its work and instead focus on cutting rates, charges and land tax as NSW has done... View
Ray Polglaze - 16 hours ago
Do you have evidence to support that assertion? View
Ray Polglaze - 16 hours ago
Barry Morris says "“Let the market sort it out – it will sort it out". But where is the evidence to support that confiden... View
Lifestyle 12

@The_RiotACT @The_RiotACT
Veteran organisations have welcomed the Federal Government's announcement that it will establish a Royal Commission into Defence and Veterans Suicide https://t.co/qpHIPzY1Vh (12 hours ago)