Only 700 students want a price on carbon? 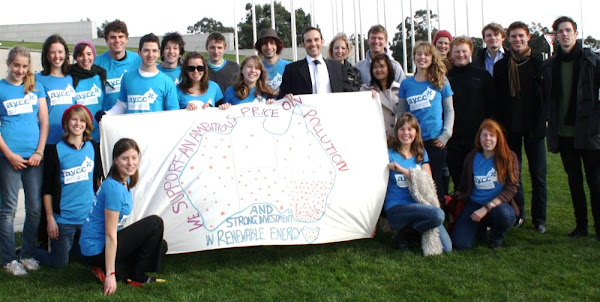 Member for Fraser Andrew Leigh has announced his receipt of a petition from the Australian Youth Climate Coalition, which a whole 700 students have been persuaded to sign.

The petition was presented by 23 young Canberrans as part of the Australian Youth Climate Coalition’s (AYCC) campaign encouraging young people to have their voice heard in the carbon pricing debate.

“These students are just some of the many who care deeply about acting on climate change,” said Andrew Leigh.

“They understand pricing carbon is the right thing to do both environmentally and economically.

Students from Campbell High School, University of Canberra, and the Australian National University discussed with Andrew Leigh why pricing carbon pollution was important to them and their peers.

“I’m proud to be standing with Canberrans from all walks of life for a price on carbon,” concluded Andrew Leigh.

One wonders what other causes could attract the signatures of 700 students if enough pretty girls manned a table in the common room smiling winsomely?

Over to you readers.

16 Responses to Only 700 students want a price on carbon?
Filter
Showing only Website comments

Correction: the title should read “Only 700 students uncool enough to sign a political petition”

The Gvmt that cocked up home insulations and the schools building programme (to name just a couple of instances) isn’t capable of running any carbon tax program, big industry is laughing at this idea. I don’t want a carbon tax personally, I pay enough local and federal taxes as things are. The Gvmt would be better off pursuing the people destroying the Global rain forests for starters.

I am disappointed with the weakness of troll-baiting in this post. “

Don’t be – it will come out soon enough. You watch.

I am disappointed with the weakness of troll-baiting in this post. Clearly could also have been titled “Only 23 students want a price on carbon”. Or even “only Andrew Leigh wants a price on carbon.”

I wonder how long it took them to draw that banner with crayons, and if mum knows they “borrowed” the good linen!

Yeah lets save the environment!

Awesome, clean nuclear power for all!

How many said no?

Ooh look, not many students. Surely that means that climate change isn’t happening.

Pretty girls smiling winsomely? The passion and commitment that is seen in young people fighting for a safe climate future is not inspired by pretty girls, but by a belief that we can make a better and safer world than the one we have inherited. 700 students in Canberra? They do not stand alone. On the weekend just past, 40,000 people hit the streets all around the country to pledge their support for putting a price on pollution, and showing leadership domestically and on the world stage. Poll after poll has shown that Australians want to cut pollution, and that they want to leave a safer world for their kids and grandkids, with clean air, clean water and a safe climate. In the past 12 months as the politicians have debated how to do this, we have seen the grassroots community strengthened by young voices, the voices of the generation that will likely see the worst impacts of climate change. The group of young people from Canberra who make up part of this strong movement are making their voices heard in the most important debate of our generation. Keep making yourselves heard!

I only counted 23. Did the media hype up the other 677 students.

I only counted 23. Did the media hype up the other 677 students.

Populist post Johnboy. The carbon tax lobby will always have to fight against the selfishness of the average Aussie, it’s human nature to not want to pay for something that is of a seemingly intangible benefit.

A failing of our species appears to be that a large section of the population, and I suspect the majority, cannot fully comprehend issues that require long term and invisible outcomes. I’ll bet there were a substantial number of Easter Islanders who were warning about impending catastrophe but drowned out by the majority who were incapable of long term rational thought.

As we are today.

Only 700 from the whole of the ACT? I would be embarrassed to show so little support for a cause.

Can’t wait to see the usual comments about ‘how this figure doesn’t reflect the true feelings of the Australian public’ and so on……………………….

In fact, it’s a fairly interesting micro-shot of other polls currently running on the acceptance of a carbon tax. In the Fox Poll a day or so ago 83% of the people were against an imposed carbon tax. So the figures from these students roughly represent the general feelings on wider scale I suspect.

Rodney Thompson - 32 minutes ago
Someone who actually deserves a payrise. View
Opinion 55

Ashley Wright - 41 minutes ago
Chris Olsen actually Clinton was right. William Hovell drive had the limit lowered between Coulter Dr and Bindubi street beca... View
Tolga Altinbas - 3 hours ago
Because one is a roadwork sign. And the other one is always there on the pole View
Wang Chow - 5 hours ago
My guess is that they changed the speed limit in Chisholm/Richardson because its cheaper than putting in more speedbumps that... View
News 21

Darron Marks - 7 hours ago
"But in this world nothing can be said to be certain, except death and taxes" View
Alex Elliott - 13 hours ago
The ACT has many interstate cars using the roads. How does the Government propose to tax these or apply a levy to them so tha... View
News 4

Bill Gemmell - 8 hours ago
Additional well-located transport infrastructure is a plus. However, maybe they should be thinking about covering these with... View
Greg Batten - 11 hours ago
Great idea for both ACT light rail and bus networks. View
Ashley Wright - 12 hours ago
Justin Watson it is, the article has that a bit wrong as the “new” stop is at Sandford Street intersection about 1km away... View
Opinion 9

Giles Tranter - 8 hours ago
We're both talking about Christianity here, right? View
Luke Felton - 10 hours ago
So OP suggests that the alleged actions of a very very small minority is a reflection of the institution blah blah. Yet, the... View
Dave Ryan - 11 hours ago
Steve Ross sooo.... your opinion is the best, then? OK. Answers my question about whether the rest of us are allowed to talk... View
Opinion 19

Julie Macklin - 10 hours ago
Many other countries don't have the unpopulated distances that we do. It's a different matter driving an electric car in Euro... View
Alex Elliott - 13 hours ago
Other countries have taxed petrol engine cars to encourage the uptake of electric vehicles which has resulted in their prices... View
Lifestyle 1

Martyn O'Connell - 11 hours ago
the 333 bus painted up to look like the XPT View
Katy Did - 13 hours ago
I loved that tram when I worked in Civic View
Karean Vaughan - 14 hours ago
I remember catching it at lunchtime, opposite the School of Music back then. A very convenient way to get to Civic centre . View
Property 11

Bushfires sear the need for change into nation’s consciousness

Youth Parliament on Sustainability Future is on Shaky Ground

@The_RiotACT @The_RiotACT
Nurses are seeking a fair go while negotiating a pay rise from a government that undervalues their important role, writes John Thistleton https://t.co/s98zXUqxR1 (38 minutes ago)

@The_RiotACT @The_RiotACT
Peter Papathanasiou's book about Greek families and secrets is heading for the small screen, with funding for developing the Canberra story https://t.co/UsxVpYrO2R (11 hours ago)

@The_RiotACT @The_RiotACT
Hot in the City: Asian Taste is bringing the flavours of Malaysia's fusion cuisine to Mawson https://t.co/BfapEQ6dPs (12 hours ago)