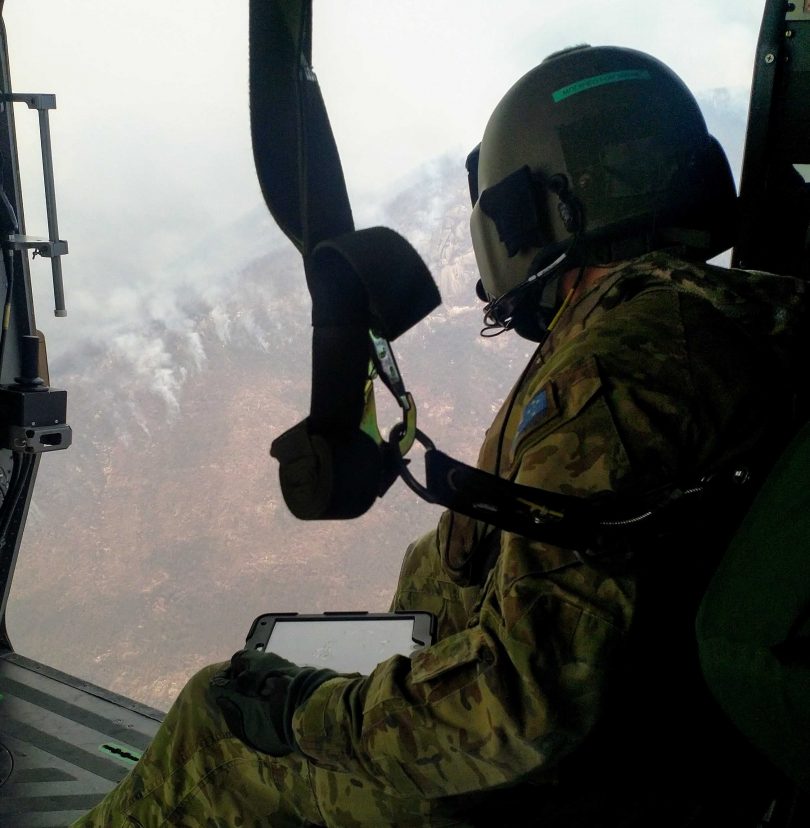 From above, the Orroral Valley fire ground is an illustration of what many people in Canberra are feeling — dry, grey, brown, smoky and burnt.

But there is a lot more yet to burn.

Today, an Australian Army MRH-90 helicopter took media for a first-hand look over the fire ground. It was a stark, yet picturesque look at the prospects facing the Australian landscape.

Orroral Valley fire from the air

Smoke from the bushfire enters the cockpit and serves as a stark reminder that the air above is no escape. We cross the terrain where the fire started in the Orroral Valley. Fuel loads on the ground are still very high with lots of stringybark eucalyptus trees, waiting.

The sky is a greyish yellow. The earth is brown and the rivers are all but bone dry.

Thick fire fronts burn near stands of dark green pine trees amongst the mottled greens of gum trees, all vying for attention from the sky above.

We fly over Mt Tennent where Australian Defence Force dozers are building containment lines. Visibility is in lockdown, while the mountain range dissolves. And then it’s clear again, as little plumes of smoke serve as signals against the main fire front.

“Today is a day of consolidation,” says ACT Rural Fire Service Chief Fire Officer Joe Murphy before we depart. “No properties have been lost and we will continue to protect what is there,” he says.

However, it is obvious that much more has been lost, especially the wildlife that doesn’t receive the text message alerts when a fire is near. 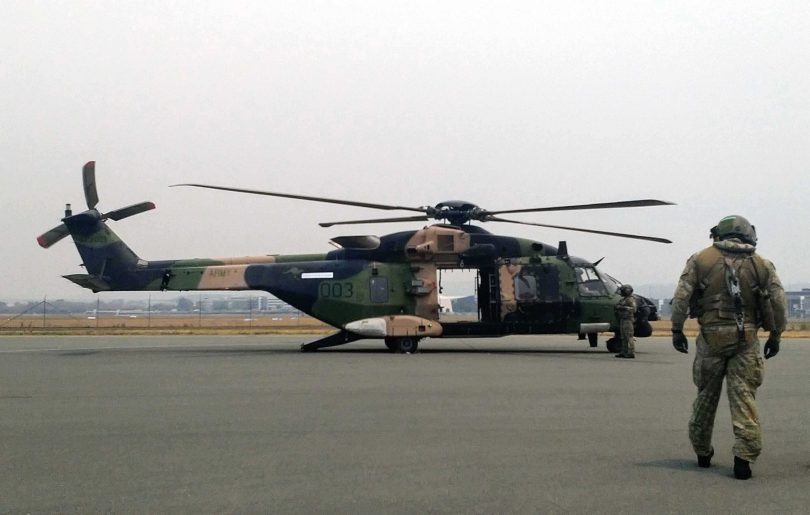 The MRH-90 helicopter is the same type as the one that first ignited the fire in the Orroral Valley at about 2:00 pm on Monday, 27 January.

Defence personnel involved said their mates are feeling sick to the stomach about what happened.

Major General Jake Ellwood is the ADF’s national coordinator for the bushfire response. Today, he said ADF personnel are working tirelessly across three states. Six of them were working in the MRH-90 at the time of the incident.

“It is absolutely regrettable about this (incident) occurring,” Major General Ellwood said. “People have been working day and night to assist emergency services, so I think you can understand what they are going through.

“They were on a mission, requested by the emergency management services, which was both reconnaissance supply and also clearance of areas.

“The helicopter came down to land and within about 12 seconds, the aircraft was engulfed in flames. If not for the actions of the crew, it would have been a very different outcome. The crew have done a wonderful job in saving everyone aboard that aircraft.

“We are going to be changing the way we are employing the light system, which will be turned off. That does come with its own inherent risks because those lights are there so that the aircraft can be seen visibly and in the conditions that they were operating in.

“Obviously we do not want to cause a fire and we will continue to change if we see anything that we are doing that is an issue,” Major General Ellwood said.

There are also obviously fewer issues on the fire ground today, which remains at an advice level following yesterday’s emergency that sparked Canberrans into a frenzy of panic on what was described as the “most serious situation since 2003”.

Commissioner Georgeina Whelan and ACT Chief Minister Andrew Barr reiterated they would not entertain the thought of Canberrans engaging in what they called “disaster tourism”.

“Say no to disaster tourism,” Commissioner Whelan said. “It’s a disgrace and there are no two ways about it.

“We had reports last night, and visuals, of cars driving down into the south and parking their cars to get a photo. There are plenty of photos on Instagram and plenty more on Facebook

“We’ve got fabulous photography. We’ve had journalists up in the air this afternoon providing all the visuals that our community needs.

“So if you don’t need to be near a fire, take my advice and stay home,” Commissioner Whelan said.

The ESA said that tonight (29 January), people in the region may again be affected by smoke, which could reduce visibility and air quality.

The Bureau of Meteorology has predicted increasingly challenging fire weather for the coming weekend, driven by extremely high temperatures and low humidity.

People may need to evacuate and the ESA says that people should start preparing now because the situation could get worse.

There remains no threat to properties in Canberra. 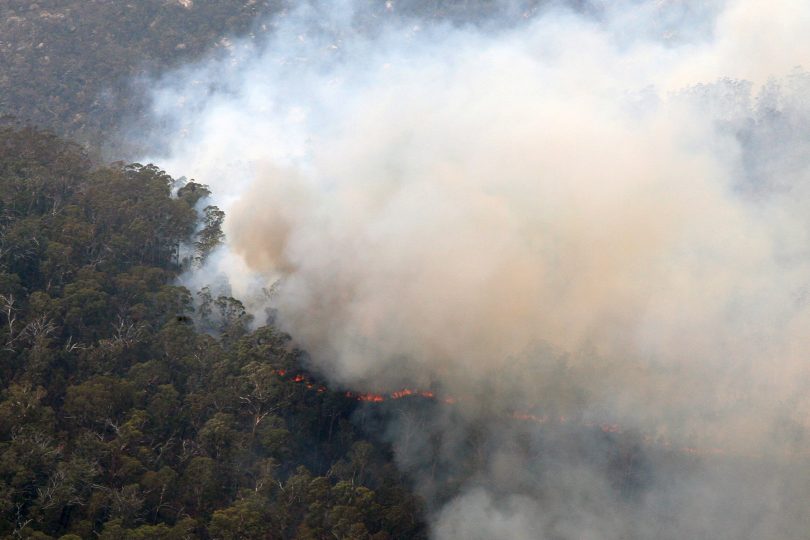 An aerial closeup of a section of the fire front of the Orroral Valley fire in Namadgi National Park at about midday on Wednesday, January 29. Photo: Supplied.

Forget Icon revenue please, Mr Barr, and impose water restrictions at a higher level. This drought is not going to break.

I can’t bare this

Take care of yourself Samia.

When going to and from the gym yesterday evening, Sulwood Drive was really dangerous as cars stopped to take photos and pulled back into the traffic again.

Beyond sad and I wish it hadn’t been caused this way. Walked and loved this area since its gazettal as a national park

What an amazing insight into the devastation in the area. Great reading and great reporting Michael. Take care. 👏👏

Didn’t really show much but we can imagine the devastation by the flames, smoke and size if the fire

Can we stop with the helicopters, that’s what caused this smokey, ashy environmental disaster.

Kriso Hadskini what do you suggest as a better option?

One of my favourite places in the world. It took a long time to recover after 2003. Some places were never the same. Lyrebirds disappeared, the soil was scorched. It’s not a trivial occurrence.

All those beautiful precious animals so so sad 😭😭