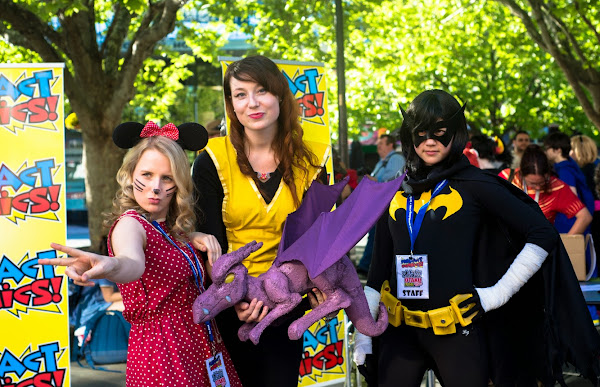 Local super cool and good looking people Owen Spargo and Kellianne Lysaght have just given us a massive amount of photos from Otakufest fast week.

Otakufest is impact Comic’s annual explosion of geeky love and as a part of it they gold a cosplay contest.

What follows is 184 pictures of people having a good time.

Have a peek at some of the brilliant work people put into their costumes. You might even spot me in there with my super lazy Doctor costume.

You can check out more of Owen Spargo’s work at Sampled Light, or have a look at Kellianne’s photos on her Flickr account.

Otaku is a derogatory term in Japanese to refer to people who follow hobbies with obsessive fevour, often to the detriment of school, relationships or work. But English, being the beast that it is, swallows foreign terms and rebrands it as its own, often twisting the meaning or context of the original text. In this case it’s now taken to refer to anime and manga fans, and often worn as a badge of pride, much as ‘geek’ or ‘nerd’ is now taken these days. Cosplay is another term that has been taken over by English usage. It used to be that it solely described costuming from Japanese pop culture source (ironically coined when Japanese witnessed Western SF costuming), but now it encompasses costuming from all parts of fandom, from general SF to super heroes to Western cartoons. (Yup, even Barcham’s Doctor Who costume 🙂

I have photos from last Friday, but I am busy preparing to go to Britain next week.

Yeah I was led to believe that was the meaning of the term as well.

The day had a manga sale and the night was spent watching anime on a big screen so it seems apt to me. However I don’t speak Japanese and I’m getting my definition via pop culture, so I could well be wrong.

Otaku (???/????) is a Japanese term that refers to people with obsessive interests, commonly the anime and manga fandom. (from wikipedia).

great picture, looks like alot of people having a great time.

I believe on Aus day weekend Cancon is holding a cosplay thingy as well.

Not sure they know the meaning of otaku, but whatevs, good on them. Great to see it go well.

bj_ACT - 6 minutes ago
My niece is the second person I’ve had recently complain that they have ended their long term cheap lease due to required p... View
Opinion 31

Steve Tsiamis - 2 hours ago
John Bosch I lock myself at home on these weekends. A short walk for a fish down at Cullendulla. View
John Bosch - 2 hours ago
Yep. Hopefully the traffic won't be backed up half way to Mogo like it was yesterday afternoon. View
Community 2

jorie1 - 6 hours ago
Well said Chewy14. Certain people cannot just change the Constitution because they feel like it or think it will work better... View
JS9 - 7 hours ago
You have no idea whether the majority want it or not at this point in time. That statement may have held in the late 80's/ear... View
chewy14 - 8 hours ago
Once again there's no real discussion around why the ACT Government should have these powers when the Constitution specifical... View
Lifestyle 3

Lauren Nihill - 6 hours ago
We are all so proud of you Kirrah! View
News 4

keek - 6 hours ago
They are an introduced pest and should not be roaming wild in any case. View
News 76

JS9 - 7 hours ago
Very true JC - as you say a lot of information is given away voluntarily, and with pretty much every phone having GPS in it t... View
JS9 - 7 hours ago
So you turn up to cafes and sit down for a lunch with people who you don't even know their names then CR? Surely across a gro... View
Julie Macklin - 18 hours ago
Samuel Gordon-Stewart I'll try that next time. Thanks. View
Breaking 4

Anne Rankin - 17 hours ago
I can’t wait to get back there again soon. View
Nadia Pessarossi - 18 hours ago
Love Corigans Cove! Only place to stay!! View
Lifestyle 33

Michelle Paul - 17 hours ago
They probably have to keep wearing their ring until the show is over.To throw us all off. View
Motoring 6

David Tickner - 19 hours ago
Alan Davey, sad but so true mate. So many whingers out there these days, with nothing better to do with their life unfortunat... View
show more show less
*Results are based on activity within last 7 days

Canberra home prices rose another 2 per cent in February amid a rush to buy into a market in full...
News 28

The developer of the problem-plagued Gungahlin pool has been absolved of liability for building defects, including if further damage or...
News 22

@The_RiotACT @The_RiotACT
82-year-old Charlie Cover isn’t letting his age get in the way of his aspirations at the National Sheep Dog Trial Championships in Hall this week https://t.co/PFPY14G6Lq (19 minutes ago)

@The_RiotACT @The_RiotACT
Manuka Pool is celebrating its 90th anniversary and the Friends of Manuka Pool want to hear your stories about this iconic Canberra landmark https://t.co/6dssl3Zwgp (3 hours ago)