Parc at Jamison is perfect for all creatures great and small 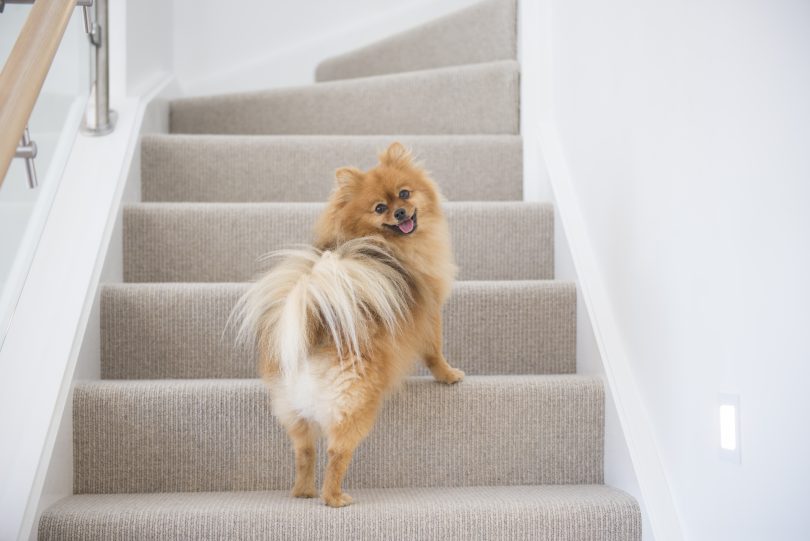 Luna, the primped Pomeranian works her best angles for a photo shoot at the pet-friendly Parc, in Jamison. Photos: Vanessa Burdett.

The diva-like behaviour began even before the photographer had taken the first picture.

The primped Pomeranian, working her best angle on the display apartment sofa, was having none of the two interlopers about to crash her photoshoot for Canberra developer Morris Property Group.

Leaping off the furniture with the velocity and pinpoint accuracy of a perfectly coiffed combat drone, Luna – who is the size of a Chanel handbag – landed at the feet of a terrified whippet and began a ferocious verbal assault. 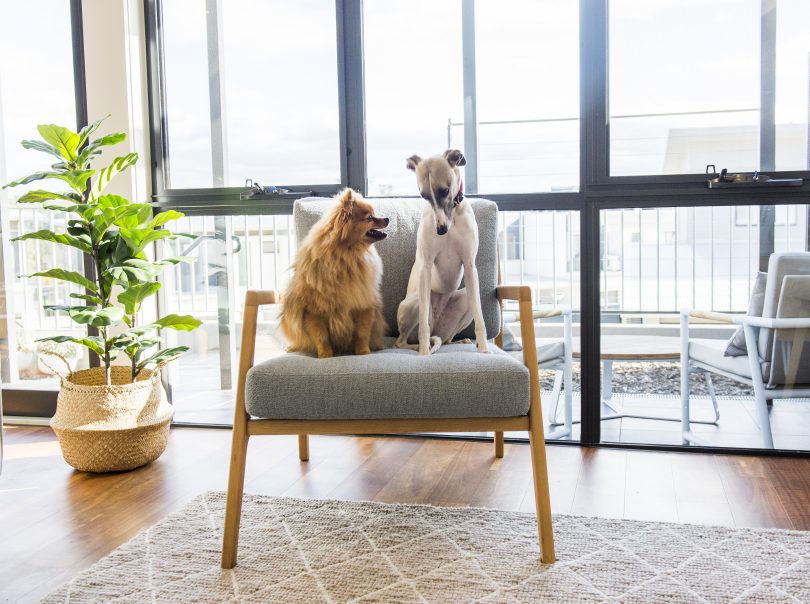 Malo the whippet struggled to control his nerves, no thanks to Luna. Photo: Vanessa Burdett.

The target of Luna’s displeasure tried desperately to keep the nerves at bay. But with a touch of Italian greyhound in the genes, Malo failed miserably. The uncontrollable shaking lasted pretty much the rest of the day.

Cooper, a ruggedly handsome golden retriever but as dumb as a box of hammers, had watched the scene unfold from behind the kitchen bench but even then he couldn’t read the room.

At the precise moment the raging redhead launched into an aerial pirouette to land a well-aimed kick on the whippet’s snout, Cooper chose to lumber over and give her a sniff. 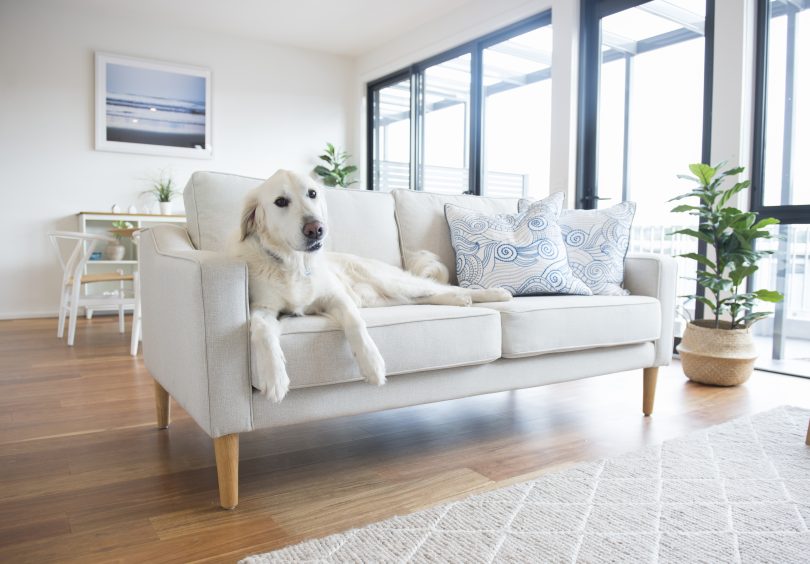 Cooper did not seem to pick up on all the fuss. Photo: Vanessa Burdett.

At this point, lesser development companies would have cut their losses … slipped the hot pink leash back onto the peeved Pom, scooped up the whippet and bundled her back into the car, coaxed the retriever outside with promises of a fetid puddle to roll about in.

But there was a job to be done, and nobody was leaving until it was finished. The production crew steeled themselves to forge ahead despite the appalling talent.

“It seemed like a good idea to do a photoshoot with some animals to show how pet-friendly our apartments are,” says Morris Property Group sales executive Anthony Alvaro, perhaps ruing the decision as his colleague Ashleigh Bujaroski lunges for the whippet as it races past for the 17th time. 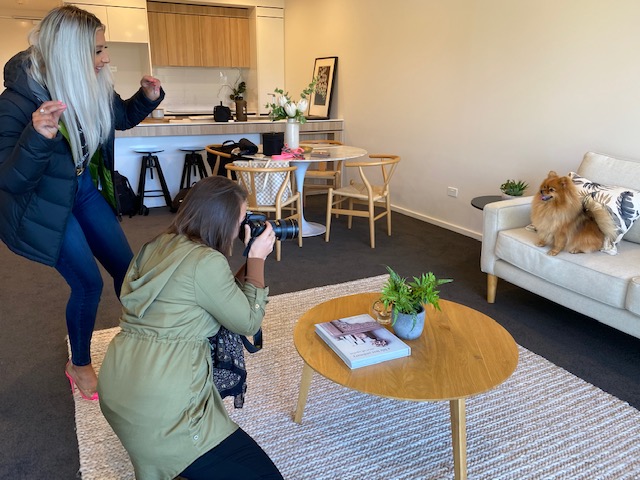 What seemed like a good idea proved to be quite a challenge. Photo: Michelle Rowe.

“A lot of our staff have animals, so we got a few together and brought them to our Parc development in Macquarie. Several of the residents here have downsized and brought their pets with them, and we wanted to let people know that making a move to an apartment or townhouse doesn’t necessarily mean you can’t take your feathered and furry family members with you.”

MPG’s hopes of a seamless shoot were not to eventuate. Incidents of inappropriate licking, refusal to take direction and an unfortunate incident on the balcony that nobody would own up to left everyone exhausted.

But against the odds, the crew managed to achieve the holy grail of a decent set of pics to run on Morris Property Group’s popular social media channels.

And things could have been worse. 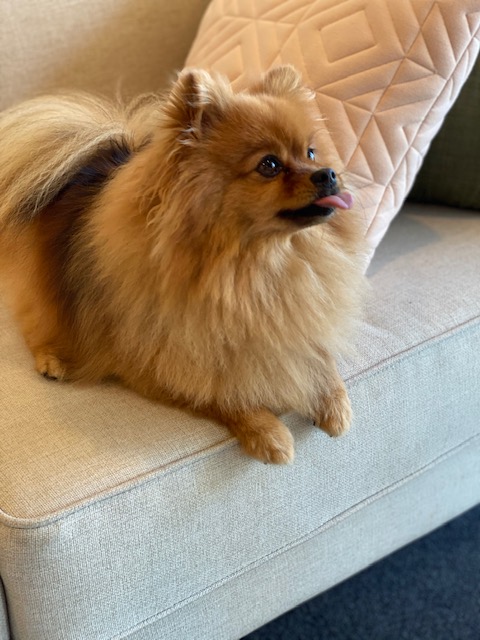 “We had a pair of rabbits lined up, but they couldn’t make it,” said Mr Alvaro.

Probably for the best. They might never have got them out of the bedroom.

Parc has limited townhouses and apartments left for sale from $499,900. Visit Parc’s fully furnished display apartments between 10:00 am and 3:00 pm daily, or go to parcjamison.com.au.

Brindie - 18 minutes ago
Given that our main roads are so congested (Tuggeranong Parkway; Adelaide Avenue) and that our public transport system is so... View
Ol L - 2 hours ago
Canberra. If the traffic gets bad just put in more traffic lights, that’ll work real good…..check out Hindmarsh Drive Phi... View
Deepak Ramanath - 3 hours ago
James Forge Wow, where is this? View
Food & Wine 10

whatwik - 19 minutes ago
FWIW, wife woke next day after her first AZ with a fever and headache - responded very well to a Nurofen and a Panadol, and t... View
MERC600 - 54 minutes ago
Have had my first shot of Astra. Had some Panadol the next day due to a bit of a headache. But am unsure if headache due to A... View
Ol L - 3 hours ago
Good friend passed out the evening after after the AstraZeneca shot, hit her head and had 10 stitches. Not a blood clot so no... View
News 2

Brindie - 21 minutes ago
The decision to go into voluntary administration is disappointing for NHC clients and their patients. However, the delay in e... View
Dave N Ange Greer - 6 hours ago
Disappointment not only for coombs but all the other nhc practices as well. 😔 View
Opinion 189

Kit Oates - 25 minutes ago
Jenny Graves As I stated categorically above, I can't stand tailgating. Apology accepted. 🙂 Given that you have still not... View
Jenny Graves - 2 hours ago
Kit Oates those people who get impatient, in my experience, tend to tailgate. If you don't, then that's great and I apologise... View
Francesco Merlino - 3 hours ago
Alex Dee Alex Dee I hope you are right! View
Breaking 1

The Canberra Southern Cross Yacht Club in Yarralumla is about to set sail on a redevelopment of its lakeside hospitality...
Breaking 13

@The_RiotACT @The_RiotACT
@networkonegroup is a great way for business owners and professionals to meet new contacts, support each other and help grow their businesses https://t.co/Mbktqyqcl5 (31 minutes ago)

@The_RiotACT @The_RiotACT
Canberrans have been warned against travel to metropolitan Sydney and ACT borders have been effectively closed to Sydney residents. Here's how the ACT is responding to the growing Sydney COVID-19 outbreak https://t.co/ftCMKm59mv (58 minutes ago)