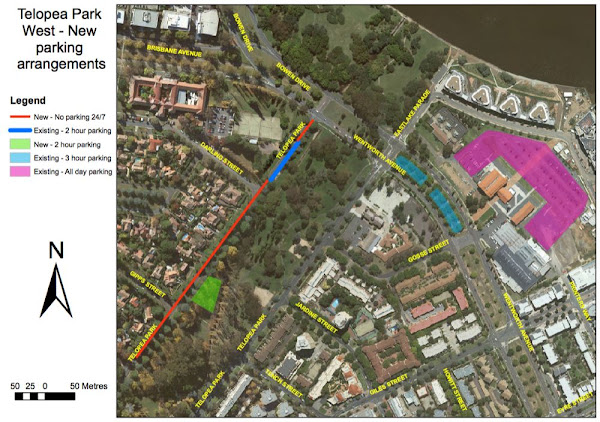 TAMS have announced they’re changing the parking in Barton around Telopea Park:

“From Monday 19 August 2013, parking on the west side of Telopea Park will be prohibited,” Ken Marshall, acting Director of Roads ACT said today.

“Currently, vehicles are parking on the side of the road along Telopea Park which restricts the space available for two-way traffic.

“In response to a number of concerns raised by the public, Roads ACT conducted an investigation of the area to see how traffic movements and road safety could be improved.

This investigation included consultation with the local community via the Kingston and Barton Residents’ Association.

“As a result, a decision has been made to prohibit parking at all times on the park side of Telopea Park west. A two-hour time restriction will also be introduced in the adjacent offstreet car parks accessed from Telopea Park west.”

I think most of the back streets in that area are all no parking or limited parking. I can see there point tho a lot of cars end up on the wrong side of the road when using it. However its really not that hard to navigate. What really annoys me is the small dirt car park is now only 2hrs, at least give us a chance to park there.

I’ll just rego the bike for 3 months and enjoy the sun.

Clap clap to TAMS and the old gits who complained!
People still fail to realise in the Barton area that when they restrict the parking on these amply wide roads they’re only pushing all of the cars into the smaller, tighter back streets in the area.
Perhaps instead of giving in to every complaint the Government could consider providing an acceptable alternative.

But alas, the powers charge don’t give two sh*ts about the workers.

Ah well bad luck for those that park there for having travelled down that stretch a gazillion times there have been no shortage of incompetent drivers ie. those who lack judgement when it comes to spatial awareness, that want to take up as much of the road as possible forcing one to travel with the left hand wheels in the concrete gutter strip just to avoid colliding with them FFS!

Great idea. Its a dangerous stretch of road & its hard for cars to pass each other when cars are parked on the road.

…and the ACT Government’s jihad on cars continues.

Its done, make peace with it.

…and the ACT Government’s jihad on cars continues.

All of their ‘alternative parking options’ are even further away for all of the Barton parking refugees that trek back and forth to Telopea Park. As a contractor that does some work in the area from time to time, parking in Barton is a nightmare, and keeps getting worse as they cover more carparks with office buildings.

It sounds like a bunch of NIMBY’s not wanting people parking near their homes – it’s not like Telopea Park West isn’t wide enough for a row of parked cars plus traffic in two directions (perhaps TAMS could instead move the centre line of the road to allow for parking along one side of the street, as they have managed to do in other locations?)

I wonder if they’ll be as rigorously ignored by the Parking Officers as other timed car parking (and “No Stopping” zones) around Kingston?

Glad to hear, it could actually be a tight fit along there with some of the spastics parking so far out from the gutter too.