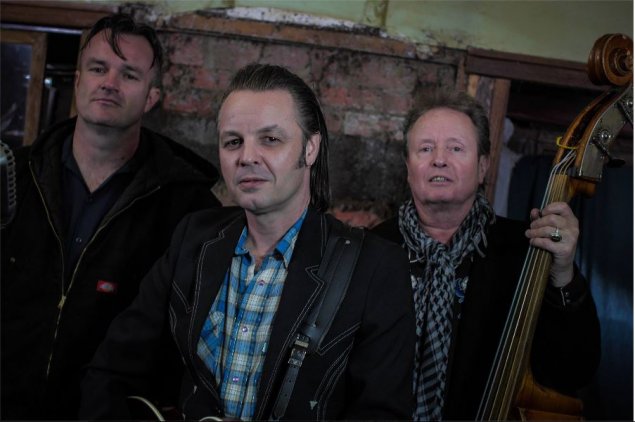 Paulie is well known around Australia for his work with The Detonators. A band he formed over 12 years ago, that has covered every corner of this wide brown land.

He is one hard workin’ guitarist. As with all artists who stand out from pack, he has developed a unique sound and style. His sound, a driving rhythmic guitar, that twangs, yet hypnotises, screams but seduces.

He sings from where it hurts, the heart – life, love, loss, leaving, yet providing the solution in dancin’ and drinking.

His style is an amalgam, of traditional Rock’n’Roll, Blues, Rockabilly and Country, all from way back when – churned through his musical mix master and presenting as his own style – the Country with a Blues tinge, the Blues with a Country tinge, and all with his raw energetic attitude. Hollering, barking and moaning, stompin’ his feet and yelling at the mic like there’s no tomorrow. Bangin’ on his guitar, buzzin’ around and twisting notes that sting you.

Determined that his premier solo release had to hit hard, he packed his bag and headed to the USA to team up with one of his long time musical peers, Preston Hubbard, (ex The Fabulous Thunderbirds) – a bass man of proportion and distinctions. Utilising Preston’s drummer, engineer and favorite studio, the tracks were laid down in two days in St Louis. Back to Melbourne for mixing and mastering thus Red Eye Flight is an apt title.

The album is like an old jukebox in your favorite bar, familiar, uplifting and rollicking.
Some great unknowns (originals) and some old favorites. Come on and dance, indeed!

Sarah Fox - 5 hours ago
Zalan Filip we will have to check it out! View
Zalan Filip - 16 hours ago
Sarah Fox the one Soph was going on about... reminds me a bit of the huge market thing in Castlemaine. View
Angela Doyle - 17 hours ago
Jacinta Elliott yes please! View
Opinion 107