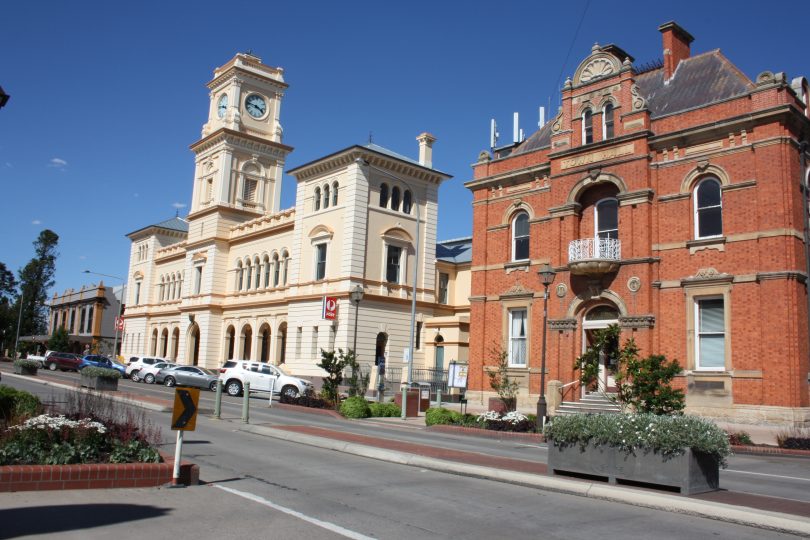 Adaptive reuse: The McDermott Centre building on the right, located next to key heritage buildings such as the Goulburn Post Office, will be the location for the new Goulburn Performing Arts Centre…a location, says Mayor Bob Kirk, which is not up for discussion anymore. Photo: Maryann Weston.

The $18.5m cost of constructing Goulburn’s Performing Arts Centre (PAC) has reignited debate over the project’s budget and location, however, the Goulburn Mulwaree Council is firmly committed to its vision for the state-of-the-art facility, subject to successful tender negotiations to lower costs.

At a recent council meeting, two councilors moved to put the cost of the PAC to public consultation for a month, a motion that was defeated by the majority of councilors. Instead, the council’s recommendation to negotiate the project costs down to $16.265m was upheld.

Later at that same meeting, the council unanimously voted to start the procurement process for Stage 1 of construction of the projected $45m Goulburn Aquatic Centre redevelopment.

When it comes to providing facilities for local residents, Goulburn Mulwaree Council Mayor Bob Kirk said council takes an inclusive view of providing for all local residents whether they are sporting, leisure or arts infrastructure needs.

“I have a grand-daughter who dances, and we’ve recently gone down to Queanbeyan to see her perform. I’m also a sports buff but I know I’m not the only person in town and I think other councilors see it like that too,” Mayor Kirk said.

“We’ve made the decision [on the PAC] and we are pressing on with it.”

Despite some talk that the PAC would be perhaps less costly if it was built at another location, Mayor Kirk said this was unlikely and that the location was not up for discussion anymore as public consultation had already been undertaken. Instead, the council was making progress on negotiations to bring down costs and consulting with NSW Create on the best ways to trim the budget without compromising the standard of the PAC.

“The PAC will be a focal point in the town and be a regional facility beyond the township. It will also be a historic link with our past (the PAC will incorporate the 1887 McDermott Centre which was the former town hall and council chambers). It’ll be a wonderful example of adaptive reuse of Goulburn’s heritage. It will be unique in so many ways,” Mayor Kirk said.

“That building needs a lot of work and maintenance anyway and there is still room for finessing the original PAC concept.”

*A 3-D walkthrough of the Goulburn PAC.

Areas under consideration in the tender negotiations included savings on excavation through placing air conditioning on the roof and whether or not it was necessary to have an orchestra pit lift. The theatre’s fly tower could also move from 17m to 13m if appropriate. He said the council was consulting with arts industry specialists on where savings might be made.

Mayor Kirk said there would be no change to the capacity of the theatre nor the stage size.

Music theatre director, rugby union stalwart and former PAC Working Group member Chris Gordon believe the PAC location in the centre of the town and in the McDermott Centre is a win-win.

“There are two standout positives with the McDermott Centre and they are cost and the atmosphere it will generate. I believe the cafes and restaurants within a few blocks of the PAC, the Workers and Soldiers clubs at one end, the Astor and Tattersalls hotels at the other end, and all the ones in between, stand to gain a regular theatre-going, concert-going clientele grabbing a meal before a show,” Chris said.

“With regards to the cost, the McDermott Centre is already owned by the council, so it’s cheaper than buying and building. For what it is worth though, I wouldn’t care where the theatre went so long as it provided all the facilities that similar [regional] theatres provide, but I think there is something special about having it in the heart of our city.”

He hoped that the council wouldn’t compromise the functionality of the PAC in return for savings. “You get one go at making it [the PAC] right.”

Chris, a longstanding community arts and sports volunteer, has indicated he’s keen to further contribute to civic life and will be standing for council at the 2020 Goulburn Mulwaree LGA elections.

Nick Savino - 10 minutes ago
25 MLAs and their staffers I’m sure they will be first doing that but I hope those 4 days equal 38 hrs View
russianafroman - 3 hours ago
If people want to work 4 days it should be optional and they should be paid the 4 days. If people want to work longer, becaus... View
Ganesh Suppiah - 4 hours ago
3 day workweek please! View
Food & Wine 29

@The_RiotACT @The_RiotACT
Tennis ACT is celebrating the milestone of 200,000 bookings on its 'Book a Court' system, which has made the sport accessible to all https://t.co/glBQTsxRE0 (2 hours ago)